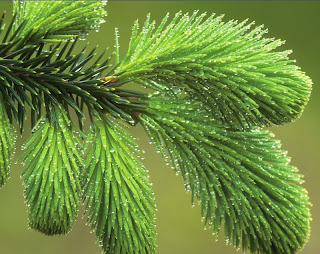 It must be the feel of cold weather coming on, but all of the sudden I’m craving the more intense, umami flavors of fall and winter foods. I even was looking at evergreen trees with hungry eyes, thinking of rosemary and other resiny herbs like oregano and winter savory.
I know, it sounds weird. I did a little research and found out that, like so many others with deviant urges, I was not alone—there are a bunch of foodies out there who jones for the taste of evergreens. Eating pine is not without precedent—pine flavors the distinctive Greek wine retsina, and pine is used by Scandinavians to highlight the richness of cured fish. Although you can use any member of the pine family as an herb, spruce is considered the tastiest. The needles that grow in the spring are tender, but this time of year, they’re more aromatic.
Spruce trees are distinctive—they’re dark green conifers with branches that droop from limbs, and are one of the most common evergreens in this area. There are three native varieties of spruces; others are immigrants, brought here for lumber or beauty. Pine needles create an acidic soil that’s unwelcoming to most living things, but spruce trees are friends of several kinds of mushrooms that prefer to grow under them, including the famously delicious porcini, aka king bolete or Boletus edulis. And a spruce is one of the oldest living beings on the planet—the roots of Old Tijikko in Sweden are 9,550 years old and still producing a tree!
What does all this have to do with the phrase “spruce up”? It is thought by the thoughtful that spruce as a verb originated in the 1500s. Then as now, foreigners got nicknames. The Prussians were called by the French the “Pruse”. Back in the day, they were known as the source of a useful tree—Pruse pine—and were famous for their awesome Pruse leather clothing. I can just imagine one medieval dandy to another: “Where’d you get that mad jerkin, Cedric?” “It’s Pruse, fly guy!” “What?” “It’s Pruse!” The term went viral and “spruce” became a term for anything well-crafted or fabulous.
But back to food! I gathered some fresh spruce branches, and began testing dishes on unsuspecting guests. Here is what I’ve learned.
Find a clean spruce tree in your yard or somewhere off the busy roadside. Trim a bundle of foot-long branches from the newest growth at the ends of limbs. Carefully stick your nose into your spruce bouquet, inhale the woodsy fragrance, and think of garden gnomes.
Back in your kitchen, there are several ways to use spruce. Simplest: you can bruise the needles with a rolling pin or other heavy kitchen tool and then steep them in liquid. Use hot water and you’ll have aromatic tea with lots of vitamin C; add enough sugar and you’ll have spruce syrup to flavor fizzy water and artisanal cocktails. Soak spruce in a nice local cider vinegar, you’ll have a delicious spruce vinegar, excellent on a hot potato salad.
Another simple technique is to use spruce as an herb. Since needles are prickery, you need to mince them finely. It’s a bit of a trick, because knives and food processors don’t work well. The easiest way is to use your favorite kitchen shears or sturdy scissors and give the ends of the needles a haircut, smidge by smidge. You don’t have to get crazy here, just so that most pieces are under 1/8” or so. You can use this powder on whatever moves you—I just tried it on sautéed wild mushrooms and it was like the forest primeval. Mix it with sea salt for a table sprinkle and try it on sweet potatoes, winter squash, and mixed roasted vegetables. It’s even good baked into shortbread cookies.
Spruce Smoked Chicken
Here’s a main dish that uses spruce three different ways. I know it’s not really grilling season, but you haven’t put your Weber away yet, have you?
Start with a delicious locally raised chicken from your own back yard or a local farm. Cut the bird into the pieces you like.
Make a bowl of brine with a handful of kosher or sea salt and some bruised spruce twigs. In the fridge, let the chicken soak in the brine for 4 to 8 hours.
Make a spice rub: mix about a quarter cup of minced spruce with a couple of tablespoons of minced green oregano, marjoram or thyme and a bunch of fresh ground pepper (no more salt). Get your grill going. Dry the chicken off, rub with a little olive oil, then sprinkle all over with the spruce mix.
Take a handful of short spruce twigs and wrap them loosely in aluminum foil. Use a knife to make a few holes. When the grill is hot, put the packet next to the hot coals—it should start smoking right away. Lay on the chicken and then put the lid on for a bit to capture the smoke—then grill the chicken your favorite way. Serve with extra minced spruce sprinkle.
Resources:
Fitzgerald Farms for chicken: Stone Ridge. 845-626-2961
cauldronsandcrockpots.com
theborderlife.com
kinfolk.com
kitchenfrau.com
hunderandthirstforlife.blogspot.com
Maria Reidelbach is an author and applied artist living and eating in Accord, NY.