Where Did All the Money Go?

Agenda for a New Economy author spells out problems and solutions.
by Maria Reidelbach 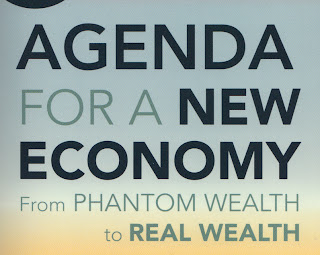 Here’s an interesting exercise: climb into your Wayback Machine and go back about four years ago. Remember how everyone was buying enormous vehicles and huge houses? Or taking out home improvement loans on the equity that suddenly appeared as home values shot up? Or watching nest eggs, safely invested in the stock market, grow and grow?

Then, within the space of a year or so, that all changed. What happened to all that money? It disappeared quickly. But what is money? When it’s being used to pay rent or buy food it seems so tangible, but how can it just evaporate?
I’ve been reading books on economics for several years now in an attempt to get a grip on the subject. I don’t know why everyone thinks economics is dry—money is pretty interesting. There are currently some great books out there. Tales of an Economic Hit Man by John Perkins got me started, with gooseflesh-inducing personal experiences of being sent to foreign countries to lure them into taking huge loans so that the money could be funneled back to big American consulting firms who would badly advise them. His book made the puzzle pieces of our international relations fit together like no other explanation I had heard.
I needed to learn more about basic economics so I read The Undercover Economist by Tim Hartford—did you know that Starbucks’ most expensive drink (to produce) is black coffee? (Everything they add to it is cheaper, yet they can charge more.) And from that book I also learned about externality costs—those are the costs that producers seldom pay, but we do (like paying cost of pollution coming from cars in the form of health and environmental problems). I followed that up with Freakonomics, another very readable tome, by Steven D. Levitt and Stephen J. Dubner, which has become a franchise with spinoff books and radio, and Calculated Risks by Gerd Gigerenzer, which helps explain statistics as they relate to real life—did you know that 1 in 360,000 people have the same fingerprint?
Then I thought I’d switch the emphasis to no money, and I read Free: How Today’s Smartest Businesses Profit by Giving Something for Nothing, by Chris Anderson, learning about “freemiums” and other strategic giveaways. Most recently I finished the truly amazing Priceless: The Myth of Fair Value (and How to Take Advantage of It) by William Poundstone, which uses neurology and other science to show how numbers behave very peculiarly in the human brain; for instance, the number 9 at the end of a price actually does exercise a certain universal allure, and scientific studies show that humans are more likely to buy an object with a dollar price that ends in 9. Even humans who consciously round up. Even you, even me.
But the best book about economics I’ve read so far, by far, is Agenda for a New Economy: From Phantom Wealth to Real Wealth by David C. Korten. This book has a fascinating history of the economic system in place in the US today, tracing our present system back to imperial times, and agreements that the monarchy had with pirates and privateers. But more important, it’s got an astounding analysis of our present economic situation and well drawn ideas for curing the current problems and moving into the future.
Korten is an experienced and learned guide, with advanced degrees in business from Stanford and 35 years working in the field, military service in Vietnam, 15 years in Asia as a Ford Foundation project specialist, and much more.
The concept of phantom wealth vs. real wealth piqued my interest and I was amazed to learn from Korten that money is not created by the US government, as I had thought. It’s created by banks when they lend money (and promise to the government to back up those loans). This arrangement worked for a while, but deregulation allowed banks to create more money with less insurance, and when the housing bubble burst, they couldn’t back up the number of loans defaulting—that’s when the government had to step in and bail them out.
It’s so simple. The banks created a lot of money that they couldn’t back up with their own assets, gave it out freely to many unqualified borrowers, and of course lots of it went to bankers in the form of commissions and bonuses. When the banks couldn’t collect from borrowers, they cried to the government to bail them out, claiming that if they went broke, they’d take the economy down with them. And so the government did. The borrowers are still on the hook for the money they borrowed. So who made out from this deal? And who paid? Follow the money.
The housing bubble and crash were possible, in a nutshell, because they were based on phantom wealth, on money not rooted in reality. It was a way for Wall Street bankers to suck the money out of local economies and enrich themselves. To end this cycle and others like it, Korten makes a compelling case for transitioning our economy to one based on real wealth, on things that are tangible: food, clothing, shelter, yes, but also on health, happiness, and the health of our environment.
He talks about the phase change of world economics that occurred during the 1970s, when we went from a world with unexhausted frontiers of natural resources to one where the human population has reached a saturation point and we need to begin husbanding our resources in a very different way. What he’s proposing is revolutionary, but very well grounded in the issues that are important to all humans, and actually very practical. Many of the strategies of change take place on a local level, and immediately benefit local economies.
It’s impossible in an article this short to even touch upon the wealth of information and thinking that’s in this book. I’m interested in reading it again, and if others are interested, I’d be willing to organize a discussion group around it. If you want to know more, check out the reviews of the book on Amazon. Be sure to check out the second edition, which has been greatly expanded from the first. For discussion group info, email me at maria@hoopla.org, I’d be interested to hear your feedback.
Maria Reidelbach is an artist, author, and proprietress of Homegrown Mini-Golf at Kelder’s Farm.

–originally published in the January 2011 issue of CWN