by Anne Pyburn Craig
These days it can be an unsettling struggle just to find out what’s in your food without growing it yourself. The USDA’s “organic” label doesn’t necessarily mean “organic.” The Safe and Accurate Food Labeling Act, a remarkable feat of doublespeak that some prefer to call the DARK (Deny Americans the Right to Know) Act, will—if it passes the Senate—prohibit labeling of genetically modified produce or ingredients and prevent companies that don’t use GMOs from labeling their products GMO free. “Country of origin” (COOL) labeling has become another political hot potato.
Then there’s the whole question of corporate social responsibility. Is an organic peach still a good peach if it’s picked with underpaid, poorly housed labor? Is your favorite brand of healthy soup being canned at a plant that’s spewing pollution? As “organic” grows ever trendier, greenwashing has become commonplace.
What to do? Most of us don’t have the time or energy that would allow us to do the amount of thorough research needed to figure out whether what we’re buying is good, bad, or indifferent for the world. 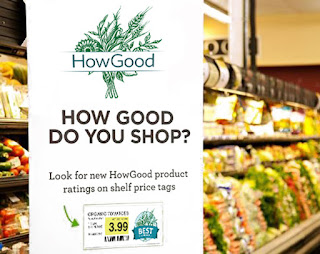 Some labels are more revealing than others. Producers of meat labeled “Animal Welfare Approved,” for example, face rigorous third-party auditing of every aspect of their animal husbandry from birth to slaughter according to standards set by the World Society for the Protection of Animals. Irradiated food must be labeled as such, and labels that state “hormone free,” “no antibiotics” or “no nitrates” are subject to third-party verification. But other labels such as “cage free” and “grass fed” allow producers a lot of wiggle room—and the label “natural” is essentially meaningless.
That’s the problem two brothers from the Catskills were thinking about in 2007 when they founded HowGood, a research, certification, and labeling company that seeks to push past the buzzwords and single-issue promotions and greenwashing to provide shoppers with an instant snapshot of the big picture.
Working independently of both government regulators and industry lobbyists, HowGood does exhaustive research, looking into over 60 benchmark indicators: production techniques, labor practices, carbon footprint, processing level, corporate behavior, and more. The result is a rating system that uses Good, Great, and Best to highlight foods that are produced with overall sustainability, as well as nutrition, in mind. These simple ratings are placed right on the shelf, next to the price of the product, so they become a part of the shopping experience.
HowGood works directly with retailers, and according to co-founder and research director Arthur Gillett, its impact on consumer choices is measurable and major. “Good, great, and best have a big impact. Sales of ‘good’ rated products go up 10 percent; there’s an increase of 15 to 20 percent for ‘great’ and 20 to 30 percent for ‘best.’ The tags being right there on the shelves has a massive impact on how people interact with the products.” No joke—they have calculated that because of their ratings 136 million better decisions were made in 2014.
A stimulus grant in 2009 allowed the company to hire twelve researchers and begin gathering data, and it rolled out a test program in the dairy section of a single store. The response was impressive, and in 2012, the test was repeated on an entire grocery store. As of 2015, HowGood ratings were in use in 26 states and 80 stores.
HowGood’s primary research office is in High Falls, although the company is headquartered in Brooklyn and has not yet placed any labels on Hudson Valley shelves. But Gillett is hoping they may be in the right place at the right time, and others seem to think so too: in 2014, the company gained $2 million in outside funding from a range of private sources including FirstMark Capital, Highline Ventures, Great Oaks Venture Capital, Serious Change LP, Jake Lodwick and Joanne Wilson.
Also last year, the company introduced mobile apps for iOS and Android that allow shoppers in non-participating stores to scan barcodes and determine whether a product is among the 170,000 they have rated. Only six percent of those rated have been assigned to the “best” category.

“We don’t interact with producers to get permission to rate,” says Gillett. “Sixty percent of products don’t get tagged at all, which we internally call ‘standards not met.’ Forty percent get rated good, great, or best; it generally breaks down to 25 percent good, 10 percent great, and 5 percent best. And because we integrate so many metrics, some of the ratings might be surprising. For example, organic is generally better than conventional. But you may find a relatively garbage food that’s being produced by a family-owned business with great labor practices—that’s still better for the world than anything made by a massive corporation with negative history, for example.
“I think a lot of people put more stock in the government’s ‘organic’ label than it deserves. There are people who think organic is the end-all be-all, and others who are just disillusioned because they have heard about greenwashing. But with the impressively big shift from conventional agriculture, some of which is really scary and horrible, people need other ways to determine what they are really getting. For example, I know someone who manages two apple farms. One is organic and the other is conventional. The conventional one sprays once or twice a season; the organic one, every two or three weeks—the stuff they are using may be better but it still isn’t great, and it’s always there. There are a great many variables.”
Putting those variables together is a massive labor of love, and Gillett says the process is a complicated one. “We interview people to build our research method. We investigate the farming practices, growing processes for specific products, processing methods. We interview producers and importers and investigate their relationships to labor groups and their different ways of shipping. We already have a map of the global food system that allows us to apply a rating to what they do in each category. My job is to turn that raw data into numbers so we can categorize and assess who is doing what and balance those against each other.”
One thing Gillett says HowGood does not do is place local and small-scale producers in direct competition with big multinationals. “No small local farm is going to produce a 300-page sustainability report, and we cannot and do not fault them for that. The process requires more proof the bigger a company is, and is most stringent for multinationals. If you’re a dairy farmer in the Northeast, for example, your labor practices are better than the global average and we start with that assumption unless something pops up that tells us otherwise. On the other hand, if your product is Southeast Asian shrimp, unless you have stringent labor protection standards in place, you’re guilty until proven innocent. Based partly on issues like that, we use a varied 35/40 percent to 60/65 percent mix between corporate history and production. The daily impact of production is greatest, because the way things go day to day has a way bigger impact on the planet than whether a company gives a tenth of a percent to charity every year.
“We’re differentiating between conventional, organic, biodynamic, and large scale monoculture products to help people understand the difference and likely impact, but we are not saying ‘the place on Lucas is better than the place on 209’ or differentiating between the vendors at the farmers’ market. More like between Organic Valley and the local dairy farm down the road. We offer insight into better options for more processed food and bulk items.”

It may well be an idea whose time has come—in 2014, 81 percent of surveyed consumers said they preferred to buy organic, and presumably those people will welcome any offered help in finding out exactly what that really means and be open to expanding their thinking to include a company’s overall impact. A company called GoodGuide, also founded in 2007 by supply chain expert Dara O’Rourke, is riding the same wave of transparency in rating not just food but toys, personal care and household products. GoodGuide was acquired in 2011 by a business division of Underwriters Laboratories, and covers only products that make up 80 percent of market share in a given category—about 210,000 products in all.
“There are people who are rating food one way or another, but the only thing that makes it into grocery stores is crappy government standards and fluff,” says Gillett. “The only way to measure impact is to see changes in the way people shop. Consumers are smarter than the people who make up the ratings and labels give them credit for; they’re already deeper into deciding for themselves. Someone trying to heal a heart issue is not going to be swayed by a ‘Heart Healthy’ sticker alone, they’re going to read the ingredients. And we make it possible for them to find out a lot more than that.”
So far, most HowGood clients are smaller independent supermarkets and health food stores, but they have interest from some larger chains in the country. To learn more about their services and find “best” rated products by category, visit their website howgood.com.