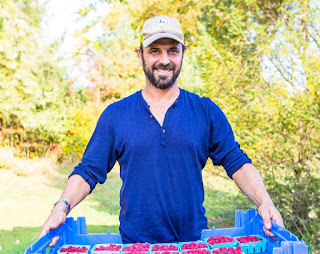 In the 1990s, Italian-born Fabio Chizzola was living in New York City when he began making trips upstate to rock climb in the Shawangunk Mountains. When the attraction of the Hudson Valley became too strong to resist, Fabio and his wife Laura Ferrara went looking for a house here. Instead, they found a farm.
As a child, Fabio spent summers at his family’s home in the mountains outside of Rome. “My father was raising chickens for the family, and also turkeys and fruit trees. It was a beautiful life there,” he says. Although agriculture held no interest for Fabio in his youth, when the opportunity to purchase Westwind Orchard presented itself in 2002, he jumped on it. “It just felt natural,” he says.
Fabio and Laura spent the next few years restoring the neglected orchard to its former glory. Dubbed Westwind Orchard by its original owner, Fabio decided to keep the name, as well as many of the property’s original fruit trees.
“When we were looking for a farmer to help us restore the orchard, everybody said, ‘First cut all the old trees and put in new trees. Then we’ll talk.’ But I didn’t want to cut those trees because they were a part of the environment. They were a part of the history of the orchard,” says Fabio. While the choice to renovate the old apple trees was not as economical as planting new ones, the couple believes they made the right choice. “You can’t make decisions just looking at money and not looking at your heart,” he says.
Today, the 32-acre farm grows far more than just apples. Westwind Orchard offers pick-your-own organic pumpkins and raspberries, and also sells produce and products to area health food stores and co-ops, as well as to restaurants in New York City.
Another highlight of the farm is its delectable wood-fired pizza. “Ninety percent of the toppings for the pizza come from the farm or from foraging,” Fabio says. “In the spring, we’re talking about asparagus. In the summer, we’re talking about zucchini and zucchini flowers.”
By going beyond just apples, Westwind has been able to thrive. “We started with apples, but we don’t really have the right land for fruit,” Fabio says. “We know that we’re going to lose apples not every other year, but almost. So, we diversified. We started to grow raspberries, we started to get bees. We do barrel-aged maple syrup and vinegar.”
Besides being good for business, eschewing monoculture-style farming in favor of growing a variety of crops is good for the earth, Fabio says. “If we don’t mass produce, we take care of our land.” Westwind also grows cover crops to enrich the soil, and avoids plowing to allow the microscopic systems of fungi and microbes within it to survive.
Responsible, organic farming is no easy job, but Fabio says that the extra work is worth it. “I am committed to serve and grow healthy foods. That’s what my goal is.”