by Michael Nunziata
“Hope springs eternal,” wrote the poet, as surely as April brings rain. Hope returns this spring to Colorado, where the state legislature considers a bill that would allow residents to set out rain barrels to catch the rain. For the present, however, rain barrels in Colorado remain contraband and any person who collects the rain within the state’s borders defies the law.
Colorado code defines a rain barrel as “a storage container with a sealable lid that is located aboveground outside of a residential home and used for collecting precipitation from a downspout of a rooftop.” Under the proposed rule, a resident could set out no more than two barrels, with a combined maximum capacity of 110 gallons. The resident could only use the captured rainwater to irrigate a lawn or outdoor garden that belongs to the same property as the rain barrel itself. Using the water for “inside purposes” is strictly prohibited. Not every resident may catch the rain.
So much for the proposed law, but what of the policy behind it? As you may have guessed, the issue really isn’t about rain barrels at all. Instead, it highlights the rapidly growing discussion in all states about ownership rights of water, though in Colorado that question is off the table, for now. Under Colorado’s water doctrine of prior appropriation, no person owns rights to the water that flows on or through her or his lands. The proposed rule wouldn’t change that. Even if the state does indeed allow residents to collect rainwater for outdoor use, the bill makes clear that the state could just as easily reverse their allowance. 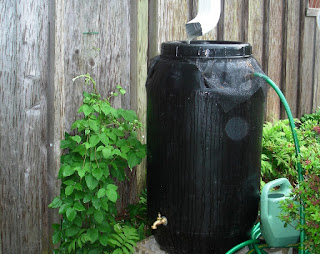 I described the Colorado raindrop rule to a local fellow I met in a pub near the Kingston courthouse. He didn’t say anything, but he laughed. New York isn’t Colorado, where rain is no laughing matter and folks have lots to say about water policy. According to the Colorado Climate Center, the state receives an average precipitation of 17 inches each year, less than half of what we get here in New York. Because of Colorado’s high elevation, all waters will eventually flow away to other states. Plus Mother Nature draws her own barrel of water in the form of evaporation: The Colorado River feeds the giant reservoir at Lake Mead, which loses, through annual evaporation, enough water to supply nearby Phoenix for three years.
Each state fashions a water policy to benefit its people. Colorado grants water rights to users based on a seniority system that began in the 1800s, when the state counted rather fewer residents than it does now. Senior users argue that rain barrels would reduce the amount of surface water runoff, leaving them with less available water to share. But most rainwater soaks into the ground or else evaporates. Colorado State University researchers reported last autumn that any surface runoff decrease caused by rain barrels would be too small to measure.
Every rule carries the risk of unintended consequences, and for Colorado’s raindrop laws, some of these are beauties. Here’s one: If Colorado owns the rain then it surely claims all precipitation, and the state must therefore menace every Cub Scout selling artisanal snow cones with threats of fines or jail. A second: What happens when yet another once-in-a-thousand-year-storm event saturates the ground and floods a householder’s basement? If Colorado owns the rain in dry seasons, then shouldn’t it also repair the rain’s damage during wet ones?
I often walk by a rain barrel that stands in front of a house on a corner in the Kingston Stockade District. The barrel is made in the old style, with iron hoops and a sealable lid. A green downspout drops from the high rooftop into the barrel through a hole in the lid. It may be that a rain barrel has stood on that spot since the early days of the Dutch and Indian settlement, when a sleepy servant ladled out rainwater of a morning to rinse the night-dust from the stoop, and children sneaked hatfuls to offer thirsty horses, perhaps even to the proud war horse of General Washington himself.
Just down the block, Vice President Clinton rests in the old Dutch churchyard, guarded by a squad of his officers and men from when he was Brigadier General Clinton and all of them were New Yorkers joined in a long, deadly fight for freedom. I visited the graveyard one rainy night the other week and gave the soldiers a short history of Colorado statehood. Then I read out its rule declaring the state’s dominion over raindrops and asked them what they thought of that. No one said anything. No one even laughed.
Michael Nunziata practices water law in New York State.