Walkway Over the Hudson

When Camoin Associates studied the potential economic impact of the Walkway Over the Hudson in 2007, they used a projected attendance figure of 267,000 visits a year. Even, at those numbers, the predictions were positive; the Walkway State Historic Park draws more like half a million visits a year—and those are just the ones who bother to sign in. 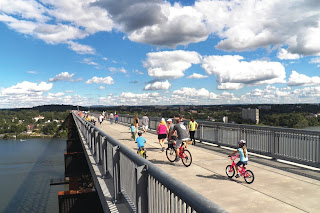