Tribes of the Hudson Valley Pt. 1: The Pioneers

by Emma Parry
Shirley Dunn in The Mohicans and Their Land 1609-1730 said that Robert Juet’s journal from the Half Moon described a people with “friendly attitudes, a complex social organization, ample food supplies, a peaceful lifestyle, and extensive territory at the moment of European contact…”
January: The Pioneers
It’s easy to see the grim in things this time of year. The fairy lights come down, with them goes the glow, and as the wave of celebration recedes, we’re left with the jetsam of reckless expenditure and family fault lines exposed by a holiday high tide. The smug comfort of New Year’s resolutions begins to pinch as the reality of deprivation from favored vices (or familiar failure to sustain good intentions) kicks in.
After the variegated blaze of fall and before the forgiving carpeting of snow, even the Valley’s palate can seem bleak and gloomy. Denuded trees reveal peeling siding and dilapidated decks, listing fencing, the caved-in faces of pumpkins with rot-rimmed eyes collapsing in the compost…You don’t need an acronym to feel a bit SAD.
Which is when to rally. Dissatisfaction is a failure of the imagination. Things could always be so much worse. At a time when the planet is teeming with refugees, and politicians are fanning sectarian fires, I can’t help reflecting on my own migration and feeling so beyond grateful to be settled here. An Englishwoman moving to America in 1999, I might have had the most privileged immigration in history. There wasn’t a safety net but in my 20s that was only a spur. Not only was I welcome, with introductions to work (which, if it would never make me rich, promised to be interesting)—in moving up here, we got to feel like pioneers.
Walking the land in January brings back that first feeling of discovery. When a decision felt like an epiphany—some kind of cellular-level commitment to the Hudson Valley.
We had first come for a weekend escape one October. I’d flown over for a weekend from London, only to find lasting love amid the panoramic, hallucinogenic spectacle of an upstate autumn. I moved across the Atlantic for good after that and we soon returned to join the part- time tribes of summer seasoners (a rolling group of fellow Europeans in a house high above Woodstock), weekend leaf-peepers (resisting the urge to Ah at every falling leaf), and skiers on the hard and fast East Coast slopes, before digging in and taking a winter cabin for two where we spent weekends reading by the woodstove, tangled in flannel sheets while the snow rose outside the low windows or hiking under bright blue skies through the pristine drifts of the Catskills. And there we decided, four centuries after our European predecessors, to find money we didn’t have, choose land, raise a frame, and later a family, here in the Hudson Valley. 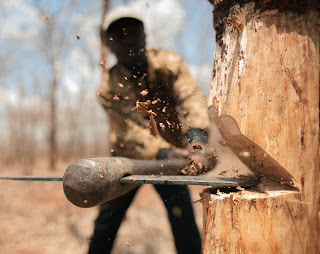 That initial decision granted a lovely license to spend weekends driving around, taking every tempting tangent of a track and waiting for the finger of fate—to encounter land we would feel we’d recognized, not found.
It was a cold, bright day with a confectioner’s dusting of snow, the first time we turned down the track to what’s now our land, bumping and rolling over the rough road until the density of trees insisted we explore by foot. I followed Josh as he thwacked with a stick at the tangle of wild blueberry bushes and low branches to widen a path. The moss and mint green lichen looked like it might have chosen to live right there in that air. Deeper in the wood, trees grew out of rocks like their roots were twisted stone, and it wasn’t clear which was which. Pine needles, teased by the wind, flipped deep green then silver with the breeze.
We agreed to meet in half an hour at the car. Before going deeper into the woods, I turned back, looking for a distinctive tree to mark the return path, and I was startled by the size of the mountain looming beyond the canopy of trees we’d come under. We were at the very hem of the Catskills and I remember thinking, what would it feel like, to live looking up at that? Like living a lifetime alongside a whale.
Despite the overwhelming statistical evidence that this day would end like every other mini trip with our sensible return to the city, I felt like I could see us here. I started to feel this strange, insistent, stirring shoot of excitement to think it might be home. Suddenly I need to see every inch of the property.
I wandered along, more and more sure I belonged, pocketing the first miniature pinecones I’d ever seen, dogged by a sound like a jingling collar on some puppy in a neighboring portal who might one day be mine.
The cold air cooled as I walked deeper into the woods. Two little birds were literally leading me, looping from tree to tree along the path. So fearless and friendly I felt like Snow White, bluebirds practically holding up my hem. I glimpsed the white rumps of deer high-tailing it out of a clearing and I felt mad happy, happy beyond embarrassment, and did a sudden handstand on the springy, snow dusted moss.
Something or someone had worn clear mossy paths through the woods and I tried to listen, to feel for early occupants—had Lenape ever been here, or early Dutch settlers, or only hunters, bear, and deer?
I started to sprint down the last of the track, nursing the little pilot light that being on the land had lit. I ran a bit stiffly at first, like I fancied myself some kind of Heidi and someone was bound to see, but I kept at it, running off the self-consciousness and soon, it was like I was running better for having been there. I am the farthest thing from a Bambi, but between the land and the mountain air I was navigating the snowy woods in some kind of ergonomic state of grace. Suddenly it was such high time I lived in the country. It was like I was late.
At the highest point of the land, the point we’d come to break ground and build, I stood to catch my breath and found myself beneath two 30-foot pines, identical to those on the jacket of book Thoughts are Things, left me by my late Granny. I was more than primed to take that as a sign.
Driving away that first time I cried—already that madly irrational attachment to the land—until we both began happily batting about actual math. We cashed in our few English assets, found the realtor, and struck a deal. Sixteen thousand dollars for four acres, leaving us not a penny then to build.
Next step, meeting our first Natives—the Woodsmen who’d help us conjure our house from nothing.
Emma Parry is a writer and literary agent with Janklow & Nesbit, NYC. She lives with her husband and two daughters in the Hudson Valley.