by Emma Parry
It was March when we finally had our first heavy snow. One of our earliest nights in the cabin, the house was still a building site. We had a woodstove and a loft floor and not much more. There was no staircase or electricity—only a ladder propped up to the sleeping loft. The walls between the timbers were still pink with insulation.
Recently married, we’d been drinking wine by candlelight and reveling in our new shelter. Later, we’d climbed the ladder and gone to sleep, lulled by the muffling, falling snow, and the delicious license for a lie-in that comes with being snowed in.
I woke in the early hours to what sounded like a sudden, dry clap in my ear to find Josh wasn’t next to me. The ladder was wonky and by the flickering light of the fire I saw a dark, slowly spreading shadow on the floor twenty feet below. I climbed down, my legs wobbling like they’d lost their patellas, and crouched by Josh, his head bleeding, arms askew, body sickeningly still. I asked him how long he’d been there? How long since he fell? “Six months,” he said and slipped unconscious. 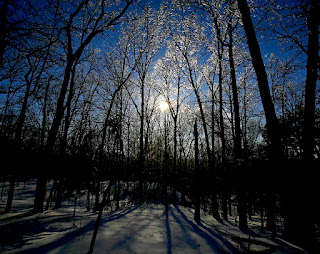 We were high in the hills and our ancient jeep was door-deep. We hadn’t a landline, lights, or a plough guy. We’d have been seriously stranded had the ladder fallen with him, with that leg-breaking drop below.
As it was, I had the cell phone but no reception and started running through the snowy woods, scrambling in panic for a signal. If I could have been seen I’d have looked ridiculous, running, phone outstretched to catch reception, my feet plunging suddenly through the crust like an amateur on an unreliable Stairmaster.
We hadn’t given proper reverence to the weather—or to the excavators. The guy who had dug our foundation, a 6’6” pyrotechnician from Catskill named Rich, would have agreed to plough had he known we were sleeping over. We’d been so busy romancing our inner recluse, we hadn’t thought of safety nets; hadn’t yet met neighbors; and we were far enough off the road that with no electricity to be seen that nobody knew we were there.
I’d get one bar, dial 911 and lose the connection. I tried again and again, climbing higher, muttering and crying, in search of a second bar, until the tenth time trying I was able to get through, name my emergency and complete the address.
I trudged rapidly back through the dark to the house, progressing better now I had my own footsteps to follow, a bonus that felt ominous, flooding me with resistance to finish the adventure we had started together on my own.
I was stirred from self-pity by thinking of Rich and his fellow heavy lifters, the long-since-here locals with their dry pride and self-reliance, the people I’ve come to count on for the safety features of our lives. The car mechanics, septic installers, cable diggers, fire fighters, and farmers—with their boy’s fantasy array of machinery and astonishing competence across different skill sets.
These are the guys who “bag their own”—raise and kill and butcher and eat animals, build an engine, ice-fish, strip an AK47, skidoo at 90 miles an hour by moonlight, and probably wouldn’t stop at dressing wounds with spider webs. People so capable they make me feel remiss for not teaching my children how to skin squirrels. These are men you feel would be perfectly okay come Armageddon—and definitely handy to know. They are early risers. Funny, big on family, and death-defying. Republican. Reactionaries. Practical, adaptive, and patriotic, tending to vinyl siding and an eagle over the garage. Rednecks, if that weren’t considered pejorative, many with a knack for securing pensions from the State.
Sometimes it feels like a fault line between the old timers and the city influx, red and blue, right and left, armed and unarmed. A long-settled local woman we know confides how much her friends hate our type, holding us personally responsible for the hikes in their tax rates. It’s pride-puncturing, when we’d been vainly gratified by feeling liked in the local stores, and struggle with the taxes like the best of them.
In the beginning the red and the blue felt about as relevant as pro-wrestling, but lately it’s too easy to wonder what unfriendly eventuality would happen if all the real-life tribal aversions—the Fracking banning, liberal progressives with NPR bumper stickers and their Repeal the SAFE Act neighbors—actually became enemies. The families with flags and trucks versus the weathered lefties driving silent Priuses. Those differences are no more arbitrary than race and given the things people do to each other in certain sectarian circumstances, I wouldn’t like the left’s chances. One side has the walk in arsenals and survival skills after all. You know every time the NRA calls asking for money and you don’t give any, your name’s on a list. And once you’re off on that jag of anxiety, it’s all too easy to imagine full on civil war and Washington in the ruins it was built to resemble.
I turn from Josh who hasn’t stirred to see headlights through the woods. The driver can’t see us, our steep and winding track now impassable, and I realize with horror the lights I see are leaving; the ambulance already backing away. I race, arms waving, my shrieks retrieving the vehicle; lead the team to the house and stumble behind them as they carry the heavy stretcher over the snow to the point we’re airlifted to Albany. Josh is deemed unresponsive, pupils fully dilated, and I call on God and every dead ancestor to help all the way.
We are sent so much love and help by family and friends and colleagues from England and the city, but know now we’re on our own without locals. Once Josh is home and slowly mending, Rich and the heavy-lifters start to stop by. The drain guy advises I try comfrey for broken bones— “Could put the meat back on the bones in the pot.” I make a poultice and apply it with frightened pride. We’ve survived our first American lesson in self-reliance. I’m left thanking God for the medical safety net, whatever its uncivilized expense, and newly attuned to responsibility. No one else was going to look after me. He’d survived and there was no time to linger in the loss that might have been. The priority was building a wider community, bridging differences, knitting in. We’d need friends left and right the minute we had family…And that’s what we did: start breeding, and bonding, as soon as we could.
Emma Parry is a writer and literary agent with Janklow & Nesbit, NYC. She lives with her husband and two daughters in the Hudson Valley.