by Maria Reidelbach
Who would have thought that Johnny Appleseed was responsible for bringing drugs to the American frontier? This early 19th century character was a songster, a raconteur, and a religious raver, peripatetic and wealthy; yet he dressed in dirty rags with sometimes a cooking pot for a hat, was perpetually barefoot, and enjoyed sleeping on friends’ floors. Sounds like he would have fit right in at Burning Man. Despite his eccentricities, or maybe because of them, he was adored by both white settlers and, even more remarkably, the Native Americans who lived in Pennsylvania, Ontario, Ohio, Indiana, Illinois, and West Virginia. To understand his story, it helps to know a little more about the fruit at the center of Johnny Appleseed’s life. 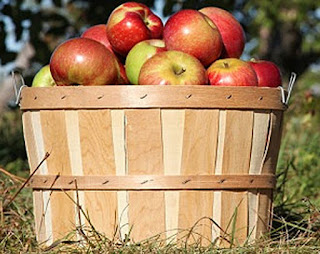 What could be simpler, more common, more basic than a good ole’ apple? Whether eaten fresh, right off the tree at its most aromatic, with tight, tart skin and juicy, crisp flesh, or baked into creamy, cinnamon-scented comfort food, most of us can’t remember life before apples.
As with so many things we take for granted, apples are much more special and complicated than meets the eye. My introduction to their delightful complexities was in a favorite book, Michael Pollan’s Botany of Desire. Who knew that you can’t grow a MacIntosh, a Pippin, a Granny Smith from seed? Because of the plants’ biology, when you plant the five seeds of any apple, you’ll get five different trees! And it’s a total crapshoot what kind—the odds favor trees with sour little green apples, but there could be a tree that bears apples that are big, sweet, red, yellow or any of a gazillion different characteristics. To reproduce a desirable tree, a cutting must be grafted onto another apple tree root—each named variety of apple is descended from a single parent. The original Red Delicious was a rogue tree growing in an Iowa orchard. The farmer kept mowing it down, it kept coming back. He finally took it as a magical sign and let it grow; in 1893 the apples it bore won first prize in an agricultural contest and the rest is history.
This was more than a century after the birth of Johnny Appleseed, baptized John Chapman. This iconic American figure made a fortune by traveling the early 19th century frontier with bags of apple seeds, sometimes in a small boat towing another filled with seed. When Chapman came to an undeveloped area he thought was soon to be settled, he’d take possession of a piece of land, plant hundreds of seeds and form a partnership with a local person to look after them. Several years later, the trees would be saplings, quickly sold out to eager new settlers for their homesteads. These folks weren’t buying trees for table apples—remember, apples grown from seed are mostly small, green and sour—but they knew that. These apples were to make hard cider, a delightfully effervescent drink and the only alcohol available in places where there were not yet bars or liquor stores. Chapman would circle back and collect his share of the sales—no wonder he was welcome!
It was the temperance movement, beginning in the 19th century, that popularized eating fresh apples. At the time, distilled liquor had become cheap and common enough for working people. The effect of drinking rum or whisky on a populace used to imbibing nothing more alcoholic than hard cider and beer was quite devastating. Working men flocked to bars on payday, stumbling out pennyless and crazed. Naturally folks were concerned, and a growing anti-alcohol movement took a stance against all alcohol, even cider and beer. One of their public relations efforts was the coining of the saying “an apple a day keeps the doctor away,” to help shift the reputation of apples to that of a delicious health food. 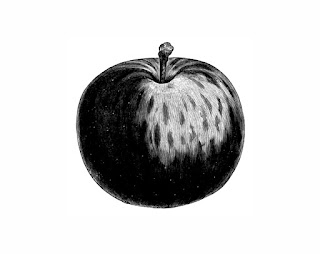 But back to basics—when I planted my first apple tree, I thought growing it would be as easy as, er, pie, but I was grossly mistaken. Turns out that most apple trees of the eating variety are quite demanding to grow—they are very susceptible to insect infestation, fungal disease, and other maladies. Each tree needs another variety nearby for pollination and fruit production, and they need skillful pruning to encourage big, sweet apples. However, local orchardists and nurseries know varieties of apples that eliminate or greatly reduce these challenges, putting apples within the reach of us backyard farmers.
More on growing fruit trees at home in the October issue, but for now, a recipe.
Spiced Apple Bread Pudding (Yield: 6-8 Servings)
(from the Stick to Local Farms Cookbook)
This is so good on a cool September evening—and for breakfast, too!
Ingredients:
• 3 cups milk (cow, soy, rice, nut, what-have-you)
• 1/2 cup maple syrup or sugar
• Pinch salt
• 4 tablespoons (1/2 stick) unsalted butter, plus more butter for the pan
• 8 thick slices of bread, crusts removed if very thick
• 3 eggs
• 2 cups cored, chopped apples, peeled or not
• 1 1/2 teaspoons ground cinnamon or cardamom or 1 teaspoon ground nutmeg
Procedure:
•Preheat the oven to 350ºF.
•Put the milk, sugar, salt and butter in a small saucepan over low heat or in a heatproof cup or bowl in the microwave. Warm just until the butter melts. Meanwhile, butter bottom and sides of a 9-inch round or 8-inch square baking dish that will nest into a larger baking pan (see below). Cut, slice or tear the bread into bite-sized pieces and put in the dish.
•Pour the warm milk over the bread. Let it sit for a few minutes, pushing down the floaters. Beat the eggs and stir them into the bread mixture along with the apples and cardamom. Set the baking dish in a larger baking pan and pour enough hot water into the large pan to come up about an inch from the top of the inner dish.
•Bake for 45 to 60 minutes or until a knife inserted into the center comes out nearly clean; the center should be just a little soft. Serve hot or at room temperature.
Maria Reidelbach is an author, a maker and a local food activist living and eating in Accord, NY. Email her at maria@stick2local.com.