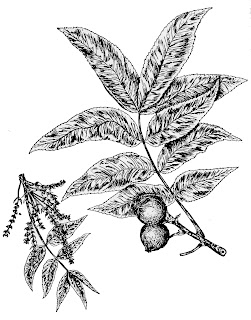 It’s looking like a good year for black walnuts,
which come from a tree that mysteriously
produces more nuts every second year.
The black walnut tree is best known for its
beautiful and expensive wood, but I love the
taste of black walnuts—they are the essence
of spicy, warm, walnutty flavor, the way that
marzipan or amaretto is the essence of almonds
If you don’t have your own black walnut tree, you’re sure to find one not far away, covered with bright green tennis ball-sized globes. The first nuts of the year, in August, tend to be empty, but the ones on and under the trees now are mature. Even the husk is fragrant, but beware—this plant is called black walnut because the husk is infused with a brownish-black pigment so potent and permanent that it was commonly used as hair dye.
Black walnuts are delicious toasted and sprinkled on ice cream or on sweet potatoes, used in baked goods, and, my favorite, sprinkled on whipped-cream topped pumpkin pie. I tend to use them sparingly, more like a spice than a food ingredient.
Preparing black walnuts is a bit time-consuming, but their flavor is so powerful that you’ll only be using a few per serving, so it won’t take long. If you’ve got a sink in the basement or garage, you might want to set up there. Don a pair of rubber or gardening gloves. Use a vise, hammer, or large pliers to crack the husk, then remove it with your hands and toss it out before it stains anything. Sue Bruck, who’s been experimenting with black walnuts this fall, recommends cleaning the nuts under water with a steel or heavy duty brush to get the husk fibers out of the shell ridges. After they’re cleaned they are good to crack and eat or to dry and store to eat later (they’ll be good up to New Year’s if you keep them in a cool place).
If you’d like to grow a domesticated nut-bearing plant, I’d recommend the hazelnut, an ancient source of nutrition, and a delicious one. We planted a tiny hazelnut on Homegrown Mini-Golf five years ago and it’s a beautiful, full, seven-foot tall bush bearing nuts every year. Hazelnuts, sometimes called filberts, look kind of like tiny savoy cabbages, wrapped in a cowl of leaves. They have a wonderful umami richness and are great with chocolate (think Nutella) as well as savory foods. Chopped finely or ground in a food processor, they make a crunchy crust on fish or chicken.
This is also the time of year to look out for chestnuts. I’ve never found a chestnut tree, since most of them died from a blight that swept the county in the early 20th century, but last year my neighbor Cynthia kindly shared some from her tree and they were amazing! If you’ve never had truly fresh chestnuts, you’re in for a real treat. They are kind of like those yummy Lunar New Year cookies that are sold in Chinatown—sweet, fragrant, rich, and almost cakey in texture.
Now, a shoutout on behalf of the people who produce food on a professional level, our local farmers. Many of us have been affected by recent storms and flooding, and that’s been awful enough, but few of us have sustained as much destruction as some of the local farms. The storms arrived at the height of the growing season, destroying crops and damaging equipment and terrain with flooding and winds. Many will never forget the sight of hundreds of pumpkins washing down-creek in High Falls and Rosendale. Inspired by a payment check sent to a farm by one of the people who rescued a pumpkin from the swirling water, the Rondout Valley Growers Association has rolled out an effort to raise money for a farm disaster fund. The Paper Pumpkin Project is appearing in farm stands and retail outlets throughout the Rondout Valley—purchase a paper pumpkin with a generous donation, support your local farms, and the farms will be there to support us with fresh, healthy, local food grown by people we know and trust in years to come. There is no better investment.
Maria Reidelbach is an artist, author, and board member of the Rondout Valley Growers Association.