The Shortest Day, the Longest Night

by JD Eiseman
“The winter solstice has always been special to me as a barren darkness that gives birth to a verdant future beyond imagination, a time of pain and withdrawal that produces something joyfully inconceivable, like a monarch butterfly masterfully extracting itself from the confines of its cocoon, bursting forth into unexpected glory.” – Gary Zukav, author of The Dancing Wu Li Masters 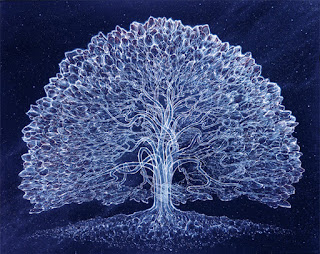 In case you’re in the dark (zing!), the winter solstice is the annual astronomical phenomenon that marks the shortest day and the longest night of the year, occurring here in the Northern hemisphere on December 22, when the sun’s maximum elevation in the sky is at its lowest point. The solstice has held a special place in the cultural calendar since neolithic times, when astronomical events were used to guide traditional agricultural activities such as the mating of domesticated animals, the sowing of certain crops, and the monitoring of winter reserves for food. For these reasons and others, celestial observations took on immense importance as societies became economically dependent on monitoring the progress of the seasons.
The midwinter festival that came to surround the solstice was the last major feast celebration of the year before deep winter began. Grazing cattle were slaughtered so they wouldn’t have to be fed grain during the winter (a cost-cutting practice still used by many small-scale farmers today), so it was often the only time of year when a plentiful supply of fresh meat was available. Wine and beer made from summer crops were fermented and ready for drinking, adding to the revelry.
Because the event was seen as a celebration of the reversal of the Sun’s ebbing presence in the sky, concepts of life and death, birth and rebirth are commonly found in cultures that used cyclical calendars based on the winter solstice. The year’s rebirth was celebrated with Hogmanay in Scotland, which has roots in the Norse celebration of the solstice. The pagan Scandanavian and Germanic people of northern Europe celebrated a twelve-day solstice holiday called Yule.  Many modern Christmas traditions such as the tree, the wreath, and the Yule log have directly descended from Yule customs.

The winter solstice continues to be celebrated in the modern age by families like the deLongs of Foxtail Community Farm in Greenville (Greene County). They see it as an occasion to mark the season, participate in a larger historical tradition, and take stock for the winter ahead. “The solstice starts our twelve days of Christmas,” says Eric deLong. “It’s a time to rest, be with family, and, for us, create new traditions.” Over the years, the deLongs have turned the solstice into a weekend-long event, with friends and family spending a couple days in their home, reveling in Rachel deLong’s traditional menu of seasonal dishes, taking part in a talent show, and breaking off into the woods for a scavenger hunt. When the holiday season is complete, the deLongs dry out their Christmas tree, which becomes the centerpiece of their summer solstice bonfire, a fitting symbol of the cyclical nature of life.