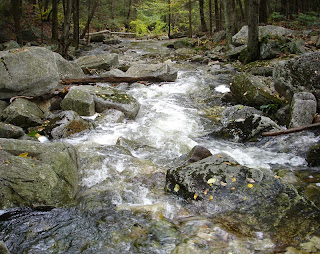 By the time the Catskill Park was established in 1885, much of the peaks and valleys that we know and love today had been stripped and destroyed. Drinking water in the once pristine creeks was undrinkable.
Deforestation was the rule of the day. Tanneries in the Catskills cut almost all of the old hemlock to use the bark as a die for leather; lumber mills were churning out hardwoods; and flatlands were all cleared for livestock grazing. The economy was booming, but the mud and industrial toxins all over the mountains were sliding into the creeks and tributaries. The Hudson River turned brown and residents downstream all the way to New York City complained about poor drinking water quality.
As the romantic writings of naturalists began to gain popularity, state residents began to urge their representatives for protection of important state lands. Over time, after the “blue line” was created in 1904 (the boundary of the park), the state began to prioritize purchases within the blue line.
The Catskill Park is now home to some of the world’s cleanest drinking water and striking landscapes. The reservoir system created by New York state—including the Ashokan, Rondout, and Pepacton—provides drinking water to New York City residents and offers beautiful spots for local residents to enjoy fishing and row boating. The reciprocal relationship between public and private lands in the park is a great example of how communities can thrive within protected lands that attract millions of visitors through ecotourism and agritourism.
Modern Day Threats
A proposal has moved quickly forward, with a great deal of opposition, to draw natural gas out of the western Catskills of Sullivan County with a technique know as hydraulic fracturing, or “fracking”.
As companies like Halliburton vie for the right to fracture parts of the Catskills, the EPA just announced that the drilling companies must now reveal the ingredients of the fracturing liquid that is pumped into deep shale deposits in order to crack the mountains. This move by the EPA was forced by the recent passage in the Senate of the FRAC Act, Fracturing Responsibility and Awareness of Chemicals Act.
Concerns about polluted water related to fracking have been reported in West Virginia, Pennsylvania, and Colorado—some cases being as extreme as having flammable tap water. To learn more, a 2010 documentary called Gasland by director Josh Fox delves into the environmental dangers of fracking . There is also extensive research online.