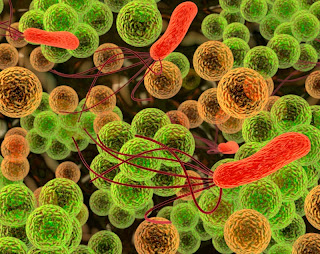 biological life, it might be best if you skip this column. As an old friend liked to say, “Mother Nature never misses an opportunity to completely gross you out.” If, like me, you find biology fascinating enough to wade through the muck, read on….

Have you heard? Scientists have discovered that 90% of the cells making up the human body are not human cells, they are microbes! It’s astonishing. The microbes, which are comprised of bacteria and yeast, mostly, are on us, inside us, and even affect the makeup of our blood—we’ve each got about 100 trillion microbes inhabiting us at any given moment. (Start squirming now.)
It turns out that we could not live healthy lives without this microbiota—they are allies, helping us digest food, protecting us against disease, even communicating with our brains. Biologists are saying that you should start thinking of yourself as a metaorganism, and they’re viewing this new science as the study of ecosystems.
Why are we just finding out about this now? Since the invention of powerful glass magnifiers in the 17th century we have known that tiny, one-celled creatures live everywhere, including in and on our bodies. However, it’s been extremely difficult for scientists to study these tiny critters—in order to get a good look, microbes needed to be cultured into larger numbers—fuzzy blobs in Petri dishes. The problem has been that only 1% of microbiota will reproduce in a lab, so those that culture easily, like the infamous E. coli, are the ones that have been most studied.
The game changer has been genetic identification technology. All that is needed is a tiny sample and an accurate census of microbes can be produced. In just the last few years genetic identification has become much more affordable. This has given microbiologists a powerful new tool and they are using it everywhere.
Researchers are finding out all kinds of interesting things. You have your own unique mix of microbiota, depending on your diet, age, genes, geography, personal history, environment, and housemates (including animals). The kinds of microbes that live on your skin are almost entirely different than those in your mouth, which are different than those in your stomach and intestines. It doesn’t get more homegrown!
What does all this mean to us, besides a reason to begin using the microbial “we”? Bear in mind that this is all very new, but biologists are discovering that we begin hosting our wee helpers almost from inception, and indeed that early exposure to a diversity of free-range microbiota has a huge effect on our health. We now know that as soon as we are born we are “innoculated” with specific varieties of starter bacteria from mom’s birth canal, bacteria that are so important that there are special nutrients in mother’s milk just for them. Early bacteria seem to be crucial in the development of white blood cells (regulatory T-cells and others) that help the immune system determine which alien substances pose a true threat. These cells play a key role in preventing allergies, asthma and other autoimmune disorders. Studies show that kids raised on farms, exposed to the huge variety of germs there, have more of these T-cells than others, and that they have virtually no allergies. Scientists have spritzed pregnant mice with microbes from Bavarian cowsheds and their pups were born protected against asthma. Drinking raw milk also seems to contribute to protection (though it can carry other risks). There’s even a study that shows that the larger the microbial population in a baby’s mattress, the less likely she is to get eczema! 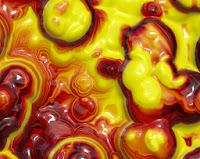 Our microbial friends are multi-talented—they do dazzling things that are still being discovered. One of these has to do with weight gain. Scientists did this weird experiment where they took samples of gut biota from identical twins of different weights. They introduced the microbes into sterile lab mice using a process called “fecal transplant.” (It’s what it sounds like—putting donor poo in the recipient’s intestines—I warned you this would get gross!) Both sets of mice were fed the same amounts of a healthy diet. Amazingly, the mice that received the transplant from the obese twins began putting on weight, and those getting the transplant from lean twins remained svelte. Similar experiments have been done with humans—obese people receiving fecal transplants from lean volunteers have even recovered insulin sensitivity. Is this a new kind of gut reno?
And there’s more! There are studies showing that transplanted microbiota can cure pernicious infections and heal chronically inflamed colons. Our microbiota even influence our mental state through their interaction with hypothalamus, pituitary and adrenal glands, which are integral in our body’s reaction to stress—early exposure to microbes affects development of these glands for the rest of our lives. Microbiota also seem to affect the chemical activity of such mood-altering messenger molecules as serotonin. There’s even some early evidence that gut bacteria may be linked to a cause of autism.
This growing knowledge is likely to change what we eat, the way we do medicine, treat mental illness, and interact with our environment. In opposition to what’s been drilled into us about healthy hygiene—and the recent craze for antibacterial cleaners—being down and dirty from the get-go looks like a good way to develop a strong constitution. Naturally, though the science is young, there are already plenty of companies trying to cash in with hastily conceived, unproven products like probiotic supplements. It’s the height of chutzpah for companies to try to sell us what we can get for free if we quit using their toxic cleaners! For the moment, it’s looking like the best practice is to relax our guard around garden-variety dirt while maintaining a reasonably clean environment, visit farms frequently with your whole family, and stay tuned for more amazing news.
Biologists say that this is just the beginning of vast new knowledge about how life works and thrives—a true game-changer. It’s another breathtaking example of the essential symbiosis among flora, fauna and fungi that is at the forefront of much current scientific research. It just keeps getting more interesting!
Info:
Human Food Project and American Gut study: HumanFoodProject.com. A great website with lots of information about our microbes, including the opportunity to take part in a study and have your own microbial community identified
M. McFall-Ngai et al. “Animals in a bacterial world, a new imperative for the life sciences,” Proceedings of the National Academy of Sciences, ncbi.nlm.nih.gov/pubmed/23391737, 2/26/13
Michael Pollan, “Some of My Best Friends are Germs,” New York Times Magazine, 5/15/13
Tom Siegfried, “Microbes at home in your gut may also be influencing your brain,” Science News, sciencenews.org, 5/28/13
Meghan Rosen, “Gut infections keep mice lean,” Science News, 9/5/13
Moises Velasquez-Manoff, “A Cure for the Allergy Epidemic?” New York Times, 11/9/13
Tina Hesman Saey, “Autism may have link to chemicals made by gut microbes,” Science News, 12/5/13
Susan Milius, “Microscopic Menagerie,” Science News, 12/27/13
Author and applied artist Maria Reidelbach and her microbes live and eat in Accord, NY