The Falcon in Marlboro Brings in the Big Acts 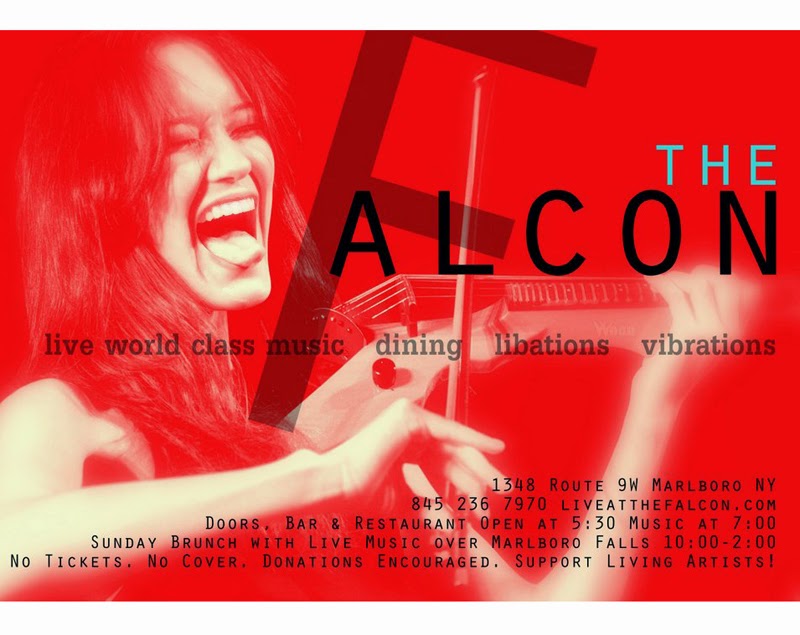 The Falcon welcomes everyone. There are no tickets, no cover charge, and no minimum. They encourage contributions to the careworn donation box, which remains as both a symbol of democracy in the arts and a way for any patron, of any financial strata, to give what they will and what they can, in support of the living artists whose work they have enjoyed. This fund goes directly to our extraordinary performing musicians in the main act, demonstrating our respect and gratitude for their skill, and livelihood.
Fri Jun 6, 2014
7pm Opener-Beki Brindle & The Hotheads
Featuring Beki Brindle/Guitar/Vocals, Brendan Lowe/Guitar, Frank Ganci/Bass and Brad Scribner/Drums
http://www.thehotheadsband.com/band.html
Beki Brindle is an under the radar, pioneering female lead /slide players who started in the 70s as a teen. She is the leader of The Beki Brindle Band and co-founder and lead guitarist of NY band Beki Brindle & The Hotheads.
Fri Jun 6, 2014
8pm Scott Sharrard & The Brickyard Band
www.scottsharrard.com
This is old school rock & roll, soul and blues in the tradition of early Steely Dan, The Allman Brothers, Joe Cocker’s Mad & Dogs and Englishmen and James Brown. Its bedrock is the original work of guitarist/singer/songwriter/producer Scott Sharrard and Moses Patrou.
Sat Jun 7, 2014
7pm Opener-Dylan Doyle Band
www.reverbnation.com/dylandoyleband
Dylan Doyle is creating a stir in the Hudson Valley music community. Born in the south to Yankee parents, he has been steeped in Robert Johnson, Townes Van Zandt, Lightin Hopkins, Bob Dylan, Neil Young, and Hendrix. He was chosen to be part of the line-up at the 2013 King Biscuit Blues festival, one of the biggest blues festivals in the country and has been touring nationally since the age of 15.
Sat Jun 7, 2014
8pm James Maddock + Band
www.jamesmaddock.net
“His timeless songwriting style, which seems to draw from great songwriters of every era, conveys quiet confidence and lovely intimacy.” -NPR
After fronting the Columbia Records band WOOD, whose debut “Songs From Stamford Hill” was featured prominently on TV shows such as “Dawson’s Creek,” Maddock moved from England to NYC in 2003. His “Sunrise On Avenue C” won a New York Music Award for Best Americana Album, while follow-up Wake Up And Dream ranked among the top albums of 2011 in WFUV’s (NYC) Listener Poll. He has performed with Bruce Springsteen, Willie Nile, Aaron Comess (Spin Doctors) and David Immergluck (Counting Crows) and is a constant live presence in the US and Europe.
Sun Brunch Jun 8, 2014
10am Saints of Swing featuring vocalist Lumiri Tubo
www.saintsofswing.com
The SAINTS of SWING are an extraordinary collective of some of the tri-state area’s finest performers with an electric groove of foot-tappin’ Swing classics —from spicy New Orleans Dixieland style (complete with a dancin’ tuba player!), elegant NYC sizzlers, Motown, R&B, Ballroom favorites, Gospel, Latin, and Klezmer! This Sunday they are joined by the phenomenal guest vocalist Lumiri Tubo.
Sun Evening Jun 8, 2014
7pm Taylor Eigsti & Friends
Featuring Burniss Earl Travis on bass, and Corey Fonville on drums
www.TaylorEigsti.com
Twenty-nine-year-old New York-based pianist and composer Taylor Eigsti started playing the piano when he was four years old. The Menlo Park native was quickly labeled a prodigy, and has since released seven albums as a leader.
Various soloist and compositional features include the San José Chamber Orchestra, Oakland East Bay Symphony, Sacramento Philharmonic, Boston Youth Symphony, New York Pops, Indianapolis Symphony, San Jose Youth Symphony, Bear Valley Symphony, Tassajara Symphony, Reno Philharmonic and multiple collaborations with the Peninsula Symphony Orchestra.
Wed Jun 11, 2014
7pm Misha Piatigorsky Quintet
Featuring Tatum Greenblatt/Trumpet, Tivon Pennicott/Sax, Danton Boller/Bass and Ari Hoenig/Drums
“…beautifully merges the worlds of serious jazz and pop”- Boston Globe
Misha Piatigorsky
http://www.mishamusic.com/
Misha Piatigorsky’s unusual harmonic sensitivity  reflect his experience as a Russian-Jewish émigré growing up in urban America. Piatigorsky made his public debut at age five on Russian National Television. He has been a highly sought-after pianist, regularly performing at prestigious venues ranging from Lincoln Center, the Kennedy Center, and the Yekaterinburg Philharmonic to the Cotton Club in Tokyo, Iridium in New York City and the Basin Street in São Paulo.
Piatigorsky’s technique, charisma and electric energy have been described in the Jazz Review as combining “the chalice of modernism with the stew-pot of soul” and “straddling the line between Mussorgsky and Vince Guaraldi,” according to Brad Walseth of Chicago Jazznet.