by JD Eiseman
The drive-in movie is a summertime tradition ‘round these parts, but it is a little known fact that the Catskills are actually the birthplace of outdoor cinema in the United States. While Camden, New Jersey famously lays claim to the nation’s first drive-in movie theater (opened in 1933), the very first outdoor motion picture event occurred 16 years earlier in Schoharie village, where the local community regularly flocked to Main Street on warm summer nights for free movies projected onto the side of the court house, followed by a perfectly American evening of dancing and ice cream. 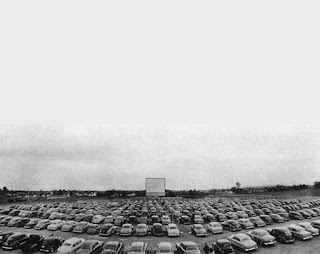 However, it took the mind of an auto-parts salesman such as Richard M. Hollingshead, Jr. to see the genius in giving a car-crazed society yet another activity they could do in their vehicles. He first conceived of the “drive-in” as a solution to a big problem: his mother, a large woman, complained that she was uncomfortable within the narrow confines of a traditional theater seat—so he stuck her in a car, strapped a 1928 projector to the hood, and tied a sheet between two trees in the yard. He patented his novel concept in May of ‘33 and opened the gates to his theater the next month. A few other theaters followed in his footsteps, but the concept didn’t really gain traction until the advent of in-car speakers in the early ‘40s. By 1958, the number of drive-ins peaked at 4,063 nationwide.
Since opening in 1959, the Greenville Drive-In in Greene County has been a social fixture for the local community and its many seasonal visitors. It has also had its ups and downs and a number of owners, each with their own ideas about programming. The latest in this lineage are Dwight Grimm and Leigh Van Swall. Grimm is an eighth-generation descendent of one of the founding families of Schoharie and a veteran of the film and television business, having worked for such entertainment houses as Jim Henson Productions, Scholastic, HBO, and David Letterman’s Worldwide Pants. After successfully completing a Kickstarter campaign to generate the necessary funds to renovate the facilities and install a modern projection system, the theater re-opened to the public last month.
Grimm and Van Swall’s vision for the Greenville Drive-In surpasses the simple revitalization of a forgotten theater. Instead of focusing on first-run new releases, Grimm is curating a schedule of classic crowd-pleasing blockbusters (Field of Dreams, Raiders of the Lost Ark, Dirty Dancing, etc.) and left-field special events, like a recent weeklong festival of music-oriented movies that correlated with the nearby Grey Fox Bluegrass Festival. In July, the theater hosted their inaugural Video Game Night, becoming the only drive-in in the country offering guests the opportunity to play video games on an 80-foot outdoor screen. Grimm plans on hosting special screenings with filmmaker Q&As and encourages the community to come forward with any and all programming ideas.
But the road to success will not be easy. Today, only some 400 drive-ins remain in the US, following a wave of closures in the wake of the cultural infiltration of cable television, home video, and the suburban multiplex throughout the ‘70s and ‘80s. Abandoned by corporate interests, more than 75 percent of the remaining drive-ins are privately owned and independently operated—yet this may, in fact, be why we should bet on their survival in this small-business-minded, DIY climate, in which a growing population of Millennials continue to lend their allegiance to trends and models formerly abandoned by the Baby Boomers (see Noah Baumbach’s While We’re Young for a crash course on this generational dichotomy).
Grimm and Van Swall are savvily tapping into this market in a number of ways. The Greenville Drive-In happens to sit in the middle of a region being nationally recognized by the farm-to-table movement and its concessions will represent this movement by featuring traditional drive-in fare, but sourcing ingredients from local farms in order to showcase the fruits of their agricultural neighbors. And in the spirit of community-mindedness, they will be scrThe Rocky Horror Picture Show on August 6, after being approached by a legion of young adults dying to see the movie together on the big screen.

The re-opening of the Greenville Drive-In is a direct expression of our community’s belief that these institutions are worth saving. Here’s a few more drive-ins in our area. Enjoy the movies!
GREENE COUNTY
Hi-Way Drive-In
10699 Route 9W, Coxsackie
hiwaydrivein.com
Opening date: 1951
ORANGE COUNTY
Fair Oaks Drive-In
365 Bloomingburg Rd,
Middletown
fairoaksdrive-in.com
Opening Date: 1960s
DUTCHESS COUNTY
Hyde Park Drive-In
510 Route 9, Hyde Park
hydeparkdrivein.com
Opening date: 1950
Overlook Drive-In
96 Overlook Road,
Poughkeepsie
overlookdrivein.com
Opening date: 1949
WATER STREET MARKET: OUTDOOR MOVIE SCREENINGS
If you’ve been to New Paltz, you’ve probably strolled through Water Street Market—a quaint, well-maintained alleyway of shops and restaurants next to the rail trail. After you have popped into the little boutiques and gotten your requisite cup of coffee from the Mudd Puddle, you wind up in an open patio with metal bistro furniture and a terraced lawn. An enormous red barn looms above, touting the words “Antiques Center.” More like “Antiques Mecca,” but that is a story for a different day.
We Ulster County folk sadly do not have a local drive-in theatre to boast of, but that doesn’t mean that open air movie watching is off the table for us. A few years ago, the clever, good people of Water Street Market devised a plan to have weekly film screenings throughout the summer. Every Monday night from June through August a different film plays at dusk (Tuesday is the rain date). Viewing is free and the vibe is laid back and friendly. Hours before the show starts, couples and gaggles of giggling friends filter into the patio and begin staking out their spots with blankets, yoga mats, and towels. All the while, local radio jockey and puppeteering legend Carl Welden sets up the projection and sound equipment to a killer soundtrack.
The movie selection ranges from Back to the Future to Grease to Royal Tenenbaums (all screened in July). The event is BYOB and there is free popcorn to boot! Gasping, cackling, and oohing and aahing are at their most enjoyable on these warm summer evenings in the company of friends and neighbors.
So grab a picnic blanket and a box of wine, and check out these upcoming shows:
August 3: Paper Moon
August 10: Dead Poet’s Society
August 17: Nobody’s Fool
August 24: Pay it Forward
August 31: Poltergeist