by Maria Reidelbach
The longest days of summer are a busy time of year for Hudson Valley farmers. There’s plenty to to do: the early summer crops like turnips, blueberries, greens and more greens are already being harvested; and at the same time farmers are planting waves of veggies like squash, beans, cole crops, and corn to extend the harvest. This is also the time of year we non-farmers are most likely to get stuck behind some massive piece of farm machinery on one of our local two-lane roads slogging along at 25 miles an hour. You’d think that being so busy they’d hurry it up! How come they go so slow? What are they doing on the road to begin with?
I always assumed a farm was a contiguous piece of land, but the reality is that most big farms have fields scattered here and there, sometimes miles apart. This happens over time because of inheritance splits and real estate pressures or opportunities. And when practiced on a large scale, farming utilizes lots of big equipment—machines that cultivate the earth by turning and breaking it up in different ways, machines that plant seeds or small plants, those that add water, fertilizers and pest control, and those that harvest. Farmers have to get that machinery from field to field. That’s why they’re on the road. And farm machinery is made for power; speed is secondary.
To help while away those slow-motion minutes next time you’re chugging along behind a blazing orange SMV (slow moving vehicle) triangle warning, I’ve made a visual field guide, or really a road guide, to identifying exactly what it is that you’re gazing upon, and I’ve spoken to a few farmers to get their perspective.
The Poop
It’s totally legal for farm machines to use the roads—they have all the rights that cars and bicycles do. Farmers are driving as fast as their rides can go, and are usually as far off the road as possible when they’ve got traffic behind, but the machines are huge and heavy, limiting these strategies. Chris Kelder, of Kelder’s Farm in Kerhonkson, said that people don’t realize how very slow the machines are and often approach too fast—as soon as you see that triangle, you’ve got to slow way down. Technically, it’s against the law to pass if you’re driving across the center lines, but of course it’s often done. Be aware that they may have poor visibility due to loads and equipment, and might sway alarmingly. I asked one farmer if there are any hand signals that they use in these situations and he showed me one I can’t mention here (he’s just kidding!). Jack Schoonmaker, of Saunderskill Farms in Accord has been driving tractors for probably 70 years. He told me that recently there’s been a big turnaround in people’s attitudes and he more often gets a wave rather than…the other hand signal. It’s an encouraging sign that there’s a growing awareness and appreciation of the value of our local agriculture.
The Field Guide
Below are some of the most common types of machines you’ll see—and there are lots of variations among these major types. Many of these huge gizmos are pulled behind or attached to the front of a tractor, a machine named for those enormous sculptural wheels that enable dragging or wheeling heavy equipment across shifting terrain.
Many thanks to John Gill and the Hudson Valley Farm Hub for allowing me free range to photograph their fleet, to Chris Kelder for help with identification, and to Theresa Venditti for creating the silhouettes from my photos. The illustrations are roughly to scale. 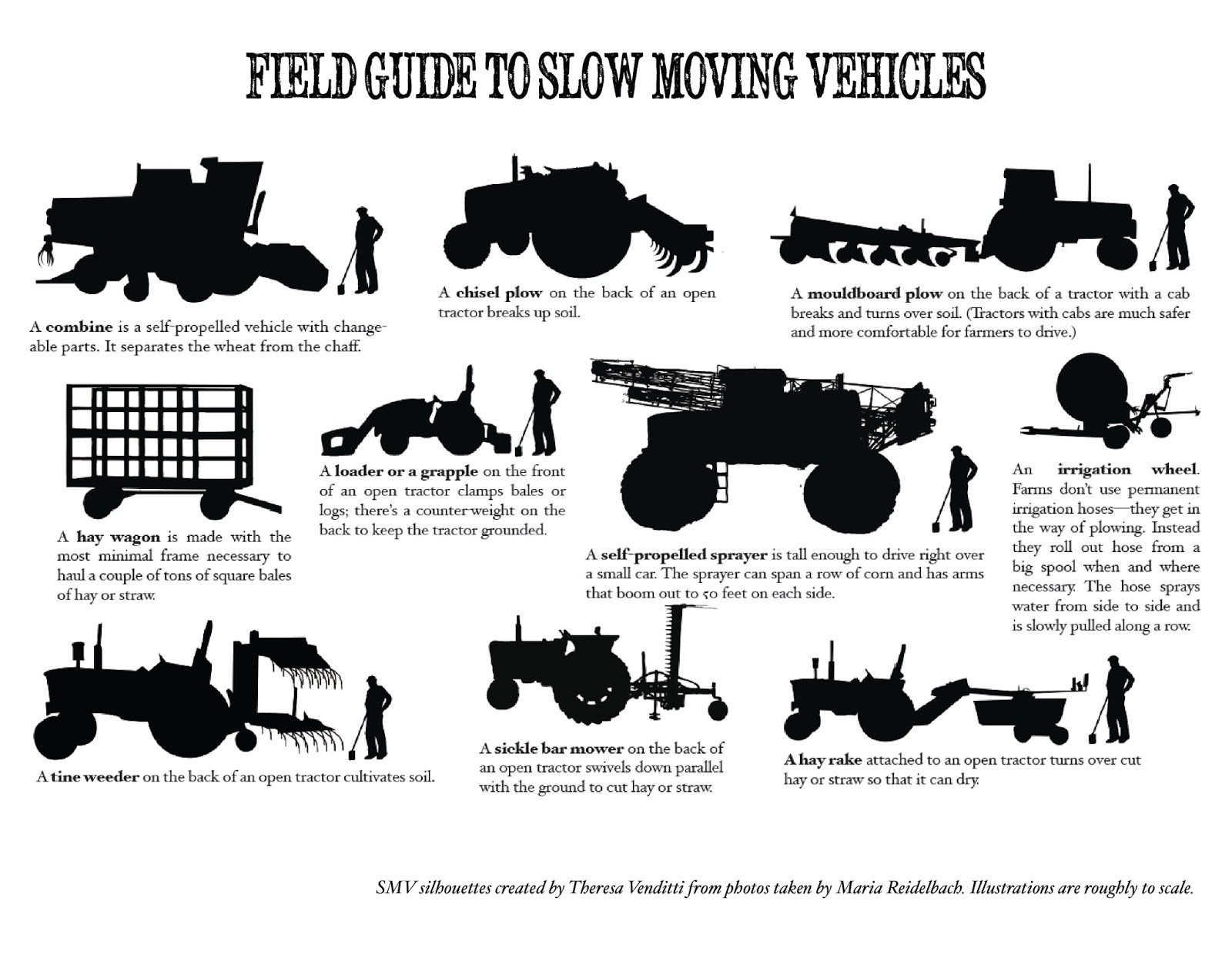 Maria Reidelbach is an author, a maker and a local food activist. Her Stick to Local Farms Cookbook is new this summer.