Major facelift completed in time for new season of shows 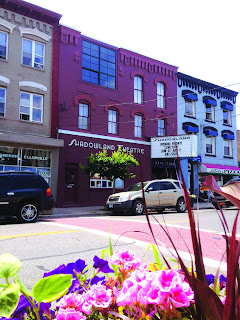 If you haven’t been to Shadowland Theatre in Ellenville for a while, you might not recognize it. In the past few years the theater has taken on a major capital project that has turned its faded façade and interior into a theater venue that would be the envy of any community. And with the theater’s new season in full swing, you couldn’t pick a better time to reacquaint yourself with the place.
“A little over two years ago we set out to raise one-million dollars for, essentially, what has become a four-phase project,” says Shadowland’s artistic director Brendan Burke. “The first one was to build actor housing. We achieved that a couple of years back.”
Shadowland then turned toward fixing up the theater itself, which Burke says was broken down into two main phases.
“First, we did the front half of the building, so a new façade, a new roof, the marquee, offices, and the lobby. We finished that up last summer. We also added 22 seats in the theater.”
This past winter, the group took on the renovation of the rest of the building, which consisted of the main auditorium, the main roof of the building, the walls other than the front wall, and the backstage area, which includes green rooms and dressing rooms.
“We also rebuilt the entire stage,” says Burke. “And we revamped the sound system and the lighting.” Burke says that, at first, this endeavor didn’t have the large scope into which it eventually grew, but once the theater got started on the first project, it seemed like a good idea to just keep going.
“Originally I don’t think our plans were to do that much to this building,” Burke says. “But we did. We did it all. And we completed the project on the Tuesday before we opened for the season.”
Folks will also be interested to know that, from now on, the theater will be able to operate in the winter months, as it now has a state-of-the-art HVAC system. In prior years, the building would be temporarily mothballed.
“We’ll be thinking about what kind of programming we want to fit in there [during the winter] that will suit our mission,” Burke says. “A good part of it will be family oriented with our kids’ shows, and the kids’ classes and their performances. But it also offers us the opportunity to do some one-night stands with musical acts and things like that.”
The theater also recently acquired the storefront situated on the corner across from Cohen’s Bakery on Market Street that will eventually be turned into a 99-seat ancillary theater.
“It’s currently serving as our rehearsal space and our classroom space,” Burke says.
The board of directors for the theater, according to Burke, had formulated a 15-year plan as to where it wanted the theater to go over the next decade-plus, and that one of the constant conundrums it faced was a lack of rehearsal space when the stage is in use.
“If we have a show onstage, where do we have the kids’ classes?” Burke says. “So we looked around at the various places in the village, and this seemed like a really dynamic spot.”
With big picture-windows, the rehearsal space will have the effect of inviting the public to check out what is going on in the interior. Burke says that he especially wanted to thank Hal Brill for donating it to the theater.
“Hal Brill is a big supporter of the theater, and he was interested in having the space used, so he donated it to us,” Burke says. “We now have all the plans [for the second theater] sketched out, but we won’t be able to start that construction until we pay off the construction of the main building.”
As for this season of performances, Burke says that it’s off to a terrific start. The season’s opening play, “The Outgoing Tide,” recently finished up its run, with terrific reviews. Next up is “Love/Sick,” a romantic comedy written and directed by Tony Award-nominated auteur John Cariani, whose earlier play, “Almost Maine,” has become one of the most-performed plays in the country. Then, beginning on July 12, Burke himself will direct the farce “Boeing, Boeing.” For details on performances at Shadowland, call 845-647-5511 or visit shadowlandtheatre.org. Either way, be sure to stop by and check out Shadowland’s transformation the next time you’re in Ellenville.
“Aesthetically, the space is really remarkable when you walk in right now,” Burke says. “It’s a big transition that respects the Art Deco history of the theater, but also moves the Art Deco forward with a more industrial feel. It’s really a beautiful space.”