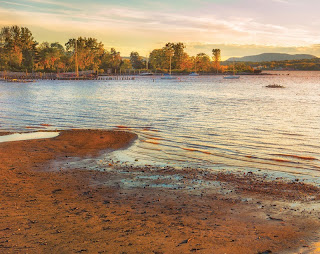 Boating is an activity that we typically think is confined to the summertime. Getting out on the water for a few hours is an especially good way to beat the heat of the summer months. But the balmy weather eventually gives way to the cooler weather of fall. And, even though the weather is cooler—and it’s unlikely that you’ll be doing much swimming or waterskiing—the fall can be a really exceptional time to enjoy the pleasures of boating. The Hudson River, with its kaleidoscope of fall colors, can be really spectacular at this time of year.

Ed O’Brien, who keeps his boat at a marina in Kingston, has been boating for most of his life.
“I’ve been boating for about 37 years,” O’Brien says. “I’ve had four boats over the years, from a 15-, to a 17-, to a 22-, to a 26-footer. Now I have a Catalina 30.”
O’Brien says that he tries to get out on the river at least 30 times each season, and that he races regularly on a Beneteau 36.7 as part of Captain Ian Westergren’s crew at the Kingston Sailing Club.
“It’s a fun boat to be on,” O’Brien says about the racing. “Westergren likes to do offshore races. So we do a race around Long Island, we race down in Haverstraw, lots of different places, which makes it a lot more fun. We also do the Rolex Race out in Newport, Rhode Island.”
In addition to this, O’Brien gets out on his own boat every Friday night during the season. Night sailing is a unique challenge, according to O’Brien, as it forces mariners to learn how to read the river, navigating less by sight and more by charts and buoys. O’Brien also says that you constantly have to be aware of commercial traffic on the river, as the Hudson remains an important waterway for tankers, barges, and other larger vessels.
“This river is a lot of fun, because you have your currents, you have your tides (the Hudson River is a tidal river), and then you have your wind-shifts constantly from the mountains,” O’Brien says.
These shifting wind patterns also happen on a larger scale, according to O’Brien, as the fall seems to be one of the best seasons for wind. And you need wind if you want to sail.
Andre Venables, who also keeps his 27-foot O’day in Kingston, echoes O’Brien on the fall season. He says that boating gives him a chance to literally leave land-based concerns behind for a little while.
“It’s very peaceful,” Venables says. “You get out and leave the cell phone at home. And you’re using the wind to power you, so you’re really feeling the elements…. You have to play all the forces of nature, both below the boat and above the boat.”
Venables says that he found himself in unsafe conditions recently.
“About a month ago I got caught in a thunderstorm that was very violent,” Venables says. “The Hudson River is known for quick changes in its weather.”
Billiam van Roestenberg keeps his boat at the Poughkeepsie Yacht Club in Staatsburg. He purchased his sailboat more recently, pooling financial resources with a friend to make the purchase.
“I grew up sailing,” van Roestenberg says. “But I had never been sailing on the Hudson until recent years.”
Van Roestenberg says that his hectic business life made him look for something that would add a degree of tranquility to his life. He also wanted to do something that would get him back on the water, so sailing turned out to be the ideal way to go.
But a note of caution should accompany any boating endeavor. It’s important that you know what you’re doing, and that you take safety precautions. Stephen Clark, who is the public affairs officer for the US Coast Guard Auxiliary (USCG), says that one of the most important things is to have proper life preservers for everyone on a vessel.
Another common problem, according to Clark, is people overloading their vessels. Boats have a specific capacity and this should be rigorously adhered to. Visiting uscgboating.org, the USCG boating safety website, is an important resource that every boater should bookmark.
For those of you who would like to get out on the river but don’t own a boat, there are a variety of rental options. The Clearwater sloop, docked at the Rondout waterfront of Kingston, takes sunset sales that are wonderful. For a more elaborate experience, set out on a dinner cruise from one of our local ports, or hop on to a chartered fishing boat.
Whatever you choose, get out on the river and enjoy the fall foliage, but remember that a little planning goes a long way when it comes to making your experience as safe as it is enjoyable.