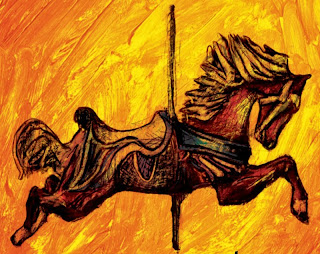 An Indie Rock slice of Americana music, These Magnificent Milesis a bounty of heartfelt stories written from the road. The band of artists whose music matches their appearance—friendly, honest, and approachable—uses its touring experiences as inspiration for their work. The poetry of life is in their lyrics: a snapshot of life in many corners of America.
Red Wanting Blue has been relentlessly on tour for 10 years now. The Ohio-based band is made up of Scott Terry (voice, ukulele); Eric Hall (guitar, lap steel, piano, vocals); Mark McCullough (bass, Chapman stick, vocals); Dean Anshutz (drums, percussion); and Greg Rahm (guitar, keys, vocals).
The album displays a diversity of songs with a consistent root rock vibe reminiscent of a long emotional day spent with old friends. Just the kind of music you’d want to listen to after just falling in love, or just losing a love. Influences seem to range from Pearl Jam to Crash Test Dummies to Jack Johnson.
National magazines and well-known website blogs are singing their praise for Red Wanting Blue:
“You can almost feel the movement of the earth while listening to These Magnificent Miles, like the writing process of the album took place while the band was out on tour. These Magnificent Miles is everything their fans were hoping for… The most impressive thing about the band is: they’ve existed this long without any label support. You can bet this band will be around for a long time to come.”
The Rock and Roll Report
“These Magnificent Miles is an independent release but it sure doesn’t sound like one. The group enlisted producer Jamie Candiloro to turn the knobs and the results are stunning. Candiloro brings out Terry’s powerful baritone on the ballad “Where You Wanna Go,” a song destined for radio airplay…”
The Cleveland Scene
These Magnificent Miles was released in 2008, but just earlier this year was signed on with Fanatic Records (EMI/Caroline). Fanatic Records is affiliated with the local ArtFarm recording studio in Accord. Since signing with Fanatic Records, the CD was released in the national market.
Listen to Red Wanting Blue and other artists on the Fanatic Records label at fanaticrecords.com. Check outvideos and music of Red Wanting Blue at redwantingblue.com.