Pilates at the Bungalow 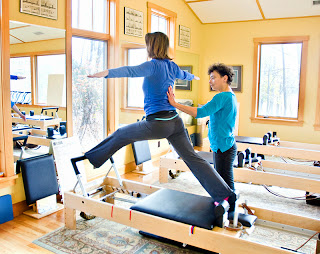 Pilates at the Bungalow opened in Accord in 2002 in a bright and airy Pilates paradise. Hudson Valley Magazine has named it “Best Pilates Studio” for three consecutive years. Elizabeth Panzer became a client at the studio in 1993 and has been a certified instructress for the past three years after she trained for her own certification.
The well-designed movements that creator Joseph Pilates originally called “Contrology” has a long history for being used in rehabilitation. With modifications, the exercises can accommodate any level of fitness. Said Panzer, “I’ve worked with elderly people, athletes, cancer survivors, and MS patients. And I hold special certifications to work with women recovering from breast cancer surgery, pregnant women, and people at risk for osteoporosis.” She added that she lives with a chronic neuromuscular condition, and that Myasthenia Gravisand Pilates is the only serious exercise she can do on a regular basis.
Pilates apparatuses offer low impact support for the body, with flexibility of the spine and strength of the abdominals being two key components of the Pilates workout. Panzer said, “Alignment is very important—it’s not just about moving your limbs but moving carefully, with purpose. Control takes a lot of concentration, and in that way Pilates involves the mind as much as the body.”
Along with an open mat class for all levels on Sunday mornings, private lessons are also offered to address individual needs at an optimum pace. “People find these especially fulfilling—and owner Terry Bernardo and I are proud of the training we offer,” Panzer said.
80 Boodle Hole Road, Accord. 845-901-0183; facebook.com/ipilates
pilatesatthebungalow.com