Spending locally strengthens the power of the dollar 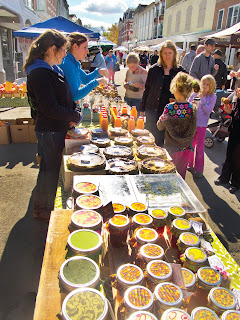 Local residents occupy Wall Street in Kingston
every Sunday from 9am to 2pm for one of the
best farmers’ markets in the area. The market
moves indoors from December through April
at the Old Dutch Church, in Bethany Hall, on
the 1st and 3rd Saturdays of each month from
10am to 2 pm. Check out VisitVortex.com for
a complete list of local markets.
Taking to the streets in order to protest an injustice is as American as apple pie. Students of this nation’s history will note, for example, that the revolution which eventually secured our independence from Great Britain was touched-off by a group of individuals who no doubt would have been described as “rabble” by their British overlords. When you mix in the destruction of private property—i.e. the boxes of tea dumped into Boston Harbor—it’s easy to envision an alternate history, one written by the victorious colonial power that depicts these patriots as nothing more than a bunch of terrorists. Had the fledgling United States lost that war, effigies of Thomas Jefferson, et al. might be going up in flames alongside Guy Fawkes each November 5.
Enter: Occupy Wall Street. This movement has been described as rudderless by the mass media. “They don’t know what they want,” we hear on a regular basis. “They’re nothing but a bunch of unwashed, unemployed ne’er-do-wells looking for a handout. I worked for my money.” But an awareness of injustice can come in many forms. It can come from the knowledge that good wages and benefits, as many of our parents experienced during the boom years of the mid-to-late 20th century, are a thing of the past. It can come in the form of an awakening to the fact that the current economic system is unsustainable, and that for every winner there must be dozens, hundreds, thousands, of losers.
Thus, one of the things the Occupy Wall Street protestors are, well, protesting, albeit indirectly, is the relentless corporate consolidation which in recent decades has led to a severe erosion of consumer choice, and with this an erosion of our standard of living. For every new big-box store, with all of its convenience and alleged low prices, more and more small businesses go belly-up, as they are simply unable to compete with the economies-of-scale that make an item manufactured and shipped halfway around the world cheaper than the same item manufactured just up the road.
And there appears to be little we can do about this continued consolidation. The United States Justice Department, at least in recent years, has never met a cartel it doesn’t like. And can anyone remember the last time a merger between two corporate behemoths was scrapped by the feds? It appears that the disconnect between Washington, DC and the voters has become fait accompli. Or, as GOP presidential candidate Mitt Romney said recently, “Corporations are people.” But these corporate persons don’t need clean air or water, they can theoretically live forever, and their sole purpose is to come up with new ways to make more profit, even at the expense of the communities in which they are located.
How can we fight such potential super-villains? By spending our money, and taking our business elsewhere. Deciding to spend your money at a local business, even if that means paying slightly higher prices, will send a message that will be heard loud-and-clear in boardrooms across the country and around the world. Like the Occupy Wall Street movement’s spread into other cities, and other countries, consumers must make a decision as to whether they will stand with their neighbors, or if they will be given to the ersatz allure of cheap junk from overseas.
Voting with Your Wallet
A 2007 study funded by a pair of civic associations in Kent County (Grand Rapids), Michigan found that when consumers did their business at locally owned banks, restaurants, pharmacies, and grocery stores, only 32 percent of this money left the local community, this in the form of items imported from outside the area. Conversely, spending money at a non-locally owned business saw 57 percent of this economic activity leave the local community. The out-of-area companies, in addition to stocking imported supplies, spent money on marketing as well as factory-farmed products that were produced at facilities in other parts of the country (and the world, even). An item such as signage, for instance, which for small businesses is almost always produced on the local level, the big retailers almost always produce either in-house or through another large, non-local company.
The most startling finding, however, came in the form of some tangible numbers. The Kent County study concluded that locally owned businesses annually generated $140 million in completely new business activity. This, in turn, led to the creation of an additional 1,600 local jobs, with a commensurate increase in local wages totaling $53 million. To bring this down to our scale, Ulster County has just under one-third the population of Kent County. 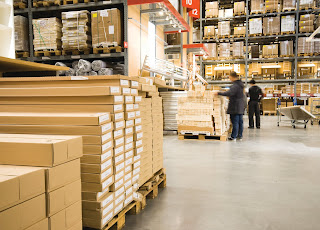 One study found that for every $1 million in sales,
big-box stores gave approximately $1000 to local
charities, while locally owned businesses gave more
than $4000 per $1 million in sales.
An even more dramatic finding came during a 2003 study of businesses in the mid-coast region of Maine. Funded by the Minneapolis-based Institute for Local Self-Reliance, the study concluded that locally owned businesses spent more of their dollars in-state. These businesses relied upon local vendors for their inventory. These vendors, in turn, employed people locally, as did their vendors, and so on. The impact this kind of spending had on these local communities cannot be overstated, given that these businesses spent approximately 54 percent in-state, with 44.6 percent of their revenue being spent within two local counties. Conversely, the big retailers spent just 14.1 percent in-state. The rest of this economic activity left the area, enriching shareholders and executives rather than family farms and mom-and-pop businesses in the area.
Another telling statistic from this study relates to the impact big-box retailers have on local charities. The study found that for every $1 million in sales, big-box stores gave approximately $1,000 to local charities. Conversely, locally owned businesses gave more than $4,000 per $1 million in sales—a fourfold increase. For communities strapped by the current slump, charitable giving is an important component of the local economy. Buying at a big-box retailer offers very little assurance that the money you spend will be helping your neighbors.
Buy Local
We’ve seen the signs as we drive throughout the Ulster County area. These signs admonish us to spend our money at locally owned businesses. And when it comes to the farm stands in our area, buying local isn’t just a way to improve the economy, it’s also a way to improve the food you see on your dinner table, and often at lower prices than what you might pay at the local supermarket.
If you are someone who shops for produce on a regular basis, you cannot help but be appalled, for instance, at the quality of the tomatoes encountered in the produce sections of the big retailers. They are often overpriced, pinkish in hue, grainy, flavorless, and unappealing. At the same time, taking a short drive to scope-out a local farm stand reveals that prices are often the same or lower (typically $1.49-$2.49 per pound, or even less), and for tomatoes that actually taste like tomatoes. Local farm stands sometimes have excellent tomatoes for about $1 per pound or less during the growing season. And don’t forget all the other items, such as locally produced organic, grass-fed beef for very reasonable prices (ground beef for just $4.99 per pound is just a little bit more than the who-knows-what-it-is you buy at the supermarket).
Sending a Message
Another way to send a message without taking to the streets is to move your money. In recent weeks the Occupy Wall Street movement has been focusing on the negative impact the big banks are having on our economy. Like vast vacuum cleaners, these banks, despite trillions in bailouts, are still seeking new “profit centers.” One national bank recently announced that it will start charging customers $5 per month for the privilege of using a debit card. For some, this was the final straw.
The Move Your Money project is a national campaign that is designed to help individuals who are looking to divest from these “Too Big to Fail” banks, with the project encouraging people to instead join local credit unions and smaller, locally owned banks. According to the Kent County study, local banks loan most of their money to people in the local community. Instead of investing in something outside your region, by depositing your money in a local bank you have some assurance that your money will be put to good work in your own neighborhood.
There are, no doubt, many other ways to become more locally centered when it comes to how you spend your hard-earned dollars. Some communities have even gone so far as to develop local currencies. Whatever you do, taking the time for some exploration—away from the mall and the big-box stores—means better food for your dinner table, it means that you’re helping to boost the local economy, and it also means that you’re getting to know your neighbors—folks, like you, who have a stake in what’s happening in your community.