Perched on the Hudson River waterfront in Orange County, the city of Newburgh is steeped in history. Located 60 miles north of Manhattan, Newburgh was incorporated as a city on April 22, 1865. In that year, residents celebrated the return of Civil War soldiers on the lawn of the headquarters used by General George Washington and the Continental Army during the American Revolution (which also happens to be the first property acquired and preserved by a US state for historic reasons).
Despite this rich historical legacy, Newburgh was hit hard economically by several factors throughout the late 20th century; the subsequent decline was precipitous as the industrial base of the city relocated. But Newburgh is currently poised on the brink of a major revival, with a burgeoning street scene, a diverse population, and an influx of inspired newcomers. 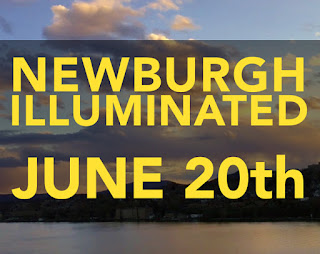 The third annual Newburgh Illuminated Festival will commemorate the city’s 150th anniversary, celebrating the rich history of the city, while generating excitement for what is yet to come. The festival will feature live music from 40 bands across multiple stages, a Hudson Valley marketplace, ethnic food vendors, a historic trolley tour, yoga, pop-up art shows, sidewalk chalk art, kids activities, and more.
Saul Williams and Corey Glover are this year’s headliners, but there will be over 12 hours of live music throughout the day. Williams, a rapper, singer, musician, poet, writer, and actor from Newburgh, is known for his blend of poetry and alternative hip hop and has recently collaborated with Wax Poetic, Buckethead (Guns N’ Roses), and Trent Reznor (Nine Inch Nails). Glover, a founding member of the Grammy-winning, platinum-selling rock band Living Colour, will perform before Williams, bringing a solo-acoustic band with him.
Also not to be missed will be the Celebration of Color, including an immersive Kirtan concert led by Gaura Vani and the Mayapuris, known for their conscious lyrics and uplifting melodies, a collaborative yoga retreat featuring Hudson Valley instructors who will teach specialty classes throughout the day, and authentic Ayurvedic foods from all corners of India.
Speaking of food, Newburgh is home to one of the most diverse restaurant scenes in the Hudson Valley. The World of Food pavilion will feature authentic Peruvian, Ecuadorian, Dominican, Jamaican, and Mexican delicacies. Expect plenty of local farm-to-table samplings, Newburgh originals, and vegetarian options, along with fresh baked goods and iced treats. The Hudson Valley Marketplace will host local artisans, small businesses, and community partners offering distinctive handicrafts and unique gifts, including jewelry, home decor, vintage items, health and beauty products, and more.
Newburgh possesses a rich architectural history, with properties, parks, and homes designed by Downing, Olmsted, and Vaux, three of the most notable American landscape architects of the 19th century (Olmstead and Vaux designed Central Park together). The historic trolley tour will explore notable sites including Washington’s headquarters, the David Crawford House, North Plank Tavern, and the Ritz Theater, where Lucille Ball made her stage debut and stars like Ella Fitzgerald, Frank Sinatra, Xavier Cugat, the Inkspots, and Bojangles all graced the stage.
Newburgh Illuminated takes place Saturday, June 20th, from 11am-midnight between Liberty Street and Broadway.  Admission is free and open to the public.
For more info visit newburghilluminatedfestival.com.
–JD Eiseman