More to Port Than Meets the Eye

The merging of two cultures through dessert wine.
by Bella, Napanoch, NY 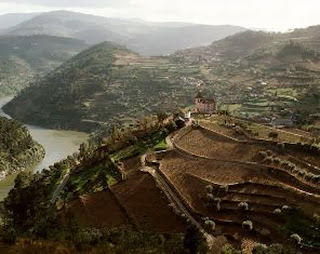 Port’s character is well known. It is stylish, chic. It is definitely for a mature drinker. Port is traditionally chosen to finish a meal. It is a sweet dessert of the alcoholic kind.

This fortified wine is sweet because it was fortified with brandy. This process kills yeast in the fermented wine and produces a rich and sugary flavor.
Where does port come from? Well it’s in the name! Port comes from Portugal and in particular from the Northeastern Douro Valley. There is an area of about 1,000 square miles where the vineyards are situated.
As a historical sidenote, an angry Britain declared war on France in 1698 and blocked French ports, resulting in the shortage of wine. British wine merchants approached the wine-renowned Portuguese, but the wines weren’t the same quality as the French so the Brits took control. Brandy was added before fermentation and port was born.
DISTINGUISHING BETWEEN TYPES OF PORT
Bottle-aged port keeps its color and fruitiness when maturing while cask-aged port loses some of its color. Ruby is the cheapest—cask aged and usually drunk young. Tawny is cask aged too but spends longer in the cask, developing more complicated flavor. Late bottle vintage (LBV) ports are cask aged before being bottled with some sediment to add character. Vintage ports are on the Rolls Royce level of the beverage. Made from the best wines and aged for a few years before bottling, they are at their best after a long maturation period.
THE WAY IT’S DONE IN ENGLAND
British naval officers passed the port from port to port—that’s clockwise to you and me. Want to play along? The host should pour for the guest to his right and then pass the bottle to the guest on the left. It’s then passed to the left all the way back to the host.
Port is making a comeback in today’s society. This is a nostalgic beverage, reminiscent of the time of elegance, wealth, and refinement. Remember the picture of the generously proportioned gentleman in a wingback chair with a cigar in one hand and a cordial of port in the other? Elegance is now in demand.
So port is normally consumed after dinner. Served in a cordial glass, it is sipped, rather than drunk. Sipping slows down the assimilation of alcohol into the blood stream. What about food? The wonderful rich flavors of port are enhanced by serving nuts, dried fruits, and cheese. I simply insist you try it with pecan pie, hot apple strudel, and/or cheesecake. Chocolate is a good match, but nice rich dark chocolate goes better than the sweeter milk chocolate.
Glancing through old photos and scrapbooks, pour a bit of port for you and friends! What a way to toast old memories and the dreams of the future.
Here are a few suggestions for superior quality port wines:
Delaforce vintage 2000
Quinta da Roueda 1995
Taylor Fladgate 1995
Delaforce Reserve 10 years old
Fonseca Bin 27
May the good fortune and positive spirit come your way through the Holiday Season and year round…remember, Life is a Matter of Taste!