by Melissa Orozco-McDonough
During the Ice Age, the entire Hudson River Valley was covered in enormous glaciers. As these glaciers shifted, moved and melted back toward the Arctic, they left behind visible striations—cuts and scrapes in rock formations—as well as massive lakes, one so large it stretched from Glens Falls all the way to the Atlantic Ocean. It is not hard to find evidence of the effects of the Ice Age on our valley—it’s all around us every day. The unique and majestic landscapes of the Hudson Valley itself are the direct result of the Ice Age. One can drive through the Shawangunk and Catskill mountains and view with the naked eye what glaciers did to rock formations, or drive through flatter lands like that of Dutchess County, and be at the bottom of what was once the aforementioned massive lake, known now as the Albany Lake. 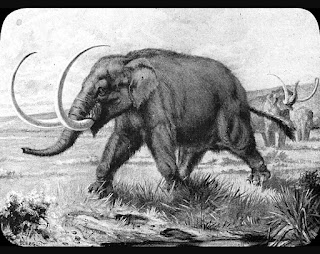 But what about evidence of the living creatures of the Ice Age? As it turns out, the Hudson Valley’s got a ton of that too. Since the early 18th century, mastodon and mammoth fossils (though mostly mastodon) have been turning up left and right throughout the valley, the first being a five-pound tooth discovered in 1705 by a Dutch tenant farmer from Claverack, NY, who then traded the tooth to a local politician. The politician gifted the tooth to Lord Cornbury, the governor of New York at the time, who then sent it off to London, labeled “tooth of a Giant.” This one tooth started a slew of speculation as to the monstrous creature it could have belonged to. The newly discovered creature served as the new republic’s first true prehistoric discovery and started a fossil frenzy.
The creature eventually became known as the “incognitum,” the unknown species. As more fossils began to turn up all around the early American Republic, the “incognitum” soon became a sort of symbol of national identity. Early Americans imagined these creatures to be massive, ferocious beings—an adequate symbol for their growing nation. It wasn’t until similar teeth and fossil specimens turned up in South Carolina and slaves commented on how they resembled the teeth of African Elephants, that early Americans began to consider that perhaps these massive beasts were related to other creatures both extinct and in existence. As fossils became more prevalent, Americans started to refer to the “incognitum” as “mammoths,” due to their skeletal resemblance to the wooly mammoths being excavated in Siberia. It was later discovered that North America had been home to both mastodons and mammoths alike.
The first mastodon to be found in the country, and the first complete mastodon skeleton to be discovered in general, was found right here in the Hudson Valley, in Orange County. It was only the second mastodon finding worldwide, and therefore, a huge topic of interest and curiosity. Discovered in 1801 by portrait artist Charles Wilson Peale on a farm near Newburgh, the skeleton was excavated and sent to Peale’s museum in Philadelphia and later sold to France. The incredible find now resides in a museum in Darmstadt, Germany. As it turns out, Orange County is home to the highest concentration of mastodon findings in all of New York—who knew our little valley had such an important and prominent prehistoric history?
In 1836, another mastodon specimen was discovered in Cohoes, between Troy and Schenectady, during excavation for a new mill. It became part of a roaming exhibit, and now resides at the New York State Museum in Albany. Warren’s Mastodon, as it’s known, was unearthed in 1845 near Newburgh. It is to this day one of the most complete mastodon skeletons known to man and has, since 1925, resided at the American Museum of Natural History in NYC. In 1845 and 1872 two more mastodons were found in Montgomery and Mount Hope, later becoming known as the Shawangunk Mastodons.
The Montgomery specimen was not only a perfect skeleton, but was also unusually large, measuring 11 feet high and 20 feet long. It now resides in Boston, MA while the Mount Hope specimen resides in New Haven, CT. Throughout the rest of the 19th century, many incomplete skeletal remains continued to be found in the Hudson Valley, but it wasn’t until the 1950s that another complete, or nearly complete skeleton was discovered. In 1952 the skeletal remains of a large, very old male mastodon were found near Monroe, NY—currently housed at Museum Village in Monroe, within the Natural History Building. Yet another mastodon skeleton was unearthed in the valley in 1972, on the Warwick-Chester border; it is known as “Sugar,” or the Sugar Loaf Mastodon.
“Sugar” measures 20 feet in length and 9 feet in height, and radiocarbon dating suggests it comes from between the years of 7910 BCE and 8135 BCE. Since 1976, this specimen has been housed at the SUNY Orange Biotech building. Perhaps the most well known and recent mastodon discovery occurred in Hyde Park in 2000. Known simply as the Hyde Park Mastodon, it is one of the most complete mastodon skeletons ever found, with 95 percent of the bones recovered. Archeologists discovered the specimen was a large male, between the ages of 30 and 40, estimated to have weighed between 10,000 and 15,000 pounds while alive. Radiocarbon dating puts the skeleton at around 11,500 years old; the popularity of its finding was such that it was even featured on the Discovery Channel. You can now find the Hyde Park Mastodon on display at the Museum of the Earth in Ithaca.
Mastodon remains have even been found in Ellenville, more specifically, mastodon teeth found in McElhone’s Pond. So it would seem that if you live in the Hudson Valley, there’s a good chance you have, at one time or another, strolled across the unearthed remains of a mastodon without even knowing it! Mastodon Valley—that’s where we live, going about our day-to-day activities atop the skeletal remains of many a prehistoric “monster.” How cool is that? Just another unique circumstance that helps to define the absolute majesty that is the Hudson River Valley.