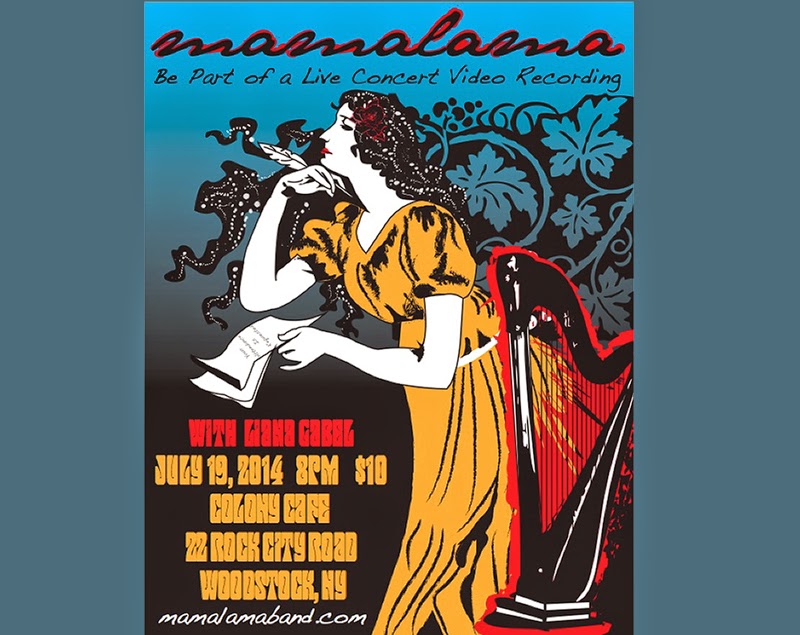 For over 50 years, the Hudson Valley have been home to a vibrant local music scene. Saturday, July 19, promises to be another musically historic date as the beloved Hudson Valley-based art band Mamalama takes the stage for a performance in which they will debut many new songs never before heard by their faithful fans.

The live concert will be held at Colony Café in Woodstock. Elizabeth Clark-Jerez, composer and founding member of Mamalama says, “I am very excited about this show. We have been working hard for the past few years composing new and unusual material for this beautifully lush and powerful orchestration. Our band has become some kind of musical organism, and the music is ripe. This performance will be our chance to share what we’ve been slow-cooking in our living room all year.” Slow-cooked music—sounds deliciously symphonic, doesn’t it?
Fans will be excited to learn that Mamalama’s unique performance will be caught on film. Clark-Jerez remarks happily, “What is extra special is that we are finally able to offer our fans some recognition. We have fans that attend almost every show that we play, and they’ve become a huge part of the music. So, now they will have the opportunity to be a part of the band’s documented history. There will be lots of footage of the audience in the recording. We will, in a sense, turn the mirror to show the beauty of the people who are listening, dancing, taking it all in.”
The multilevel Colony Café is well-suited to host this show, boasting a large balcony overlooking the performance space. The venue’s piano is also a key component for the show, as about half of Mamalama’s new material is performed on piano by Elizabeth Clark-Jerez. The introduction of piano as a dominant instrument heralds a new musical era for the band.
Mamalama performs an eclectic style of music that eludes categorical definition. Their music is organic and improvisational in nature, melding Renaissance, folk, classical, psychedelica, and world music styles.
The band is comprised of Elizabeth Clark on harp, piano and vocals; Henry Lowengard on hammer dulcimer, glockenspiel, tenor recorder, melodica, iPad and vocals; Rusty Borris on bass and vocals; Eric Ortner on violin, French horn and vocals; Annie Roland on vocals and octave mandolin; and Cornelia Logan on cello and vocals.
This wide variety of instruments hints at the ethereal auditory experience that is in store. And the opening act will be another local talent—Rochester native Liana Gabel, a phenomenal young singer songwriter. So whether you are a longtime Mamalama-Head or newbie to the local music scene, make the trip out to Woodstock to enjoy what promises to be an unforgettable night of music, dancing, and community.
Get your ticket to attend the show for $10 at the door. Colony Café is located at 22 Rock City Road in Woodstock, New York.  For more information about the performance or the band itself visit mamalamaband.com.