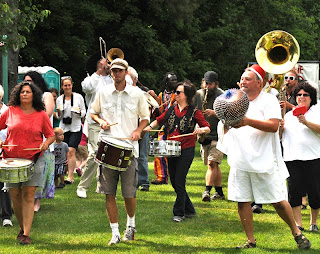 The self-organizing, ever-morphing Transition Towns experiment is patterned after living-systems in nature. That’s a tall order! To take this path in transitioning towns toward local resiliency in the United States is to deliberately step away from mainstream thought and behavior.
Interdependence

In an ecosystem, trillions of organisms dance a ballet of interrelated exchange. Each organism contributes to the needs of its neighbors, to the equilibrium, and the resilience of the whole while maintaining its own identity. How do human systems measure up?

Do we value each other’s humanity equally? Embracing the living-systems goal requires a fundamental shift of lenses for those conditioned in the hyper-individualistic, stratified culture that drives the US economic system. Transitioning challenges us to appreciate each other’s innate talents rather than objectify people as commodities with an assigned market value.

How many people accept and act on the knowledge that an hour of a babysitter’s time is equal to an hour of a neurosurgeon’s time since each are as vital to the functioning of the human system? Valuing each person’s contribution equally is a beacon in the distance that deepens the environmental work Transitioners do together.

Power-&-control, competitive, and hierarchical habits in group-work are hard to kick. If we participate in the “business as usual” mainstream, power and control dynamics infuse the air that we breathe. Natural living-systems on the other hand, have no need for a centralized control structure. The power of a living-system is derived not from individual participants but from how participants are organized, and the interchange among them. So while the contributions of individuals are essential, the power of systems emerges from their interdependence.
The non-hierarchical Transition movement tasks groups to vigilantly self-observe in order to head off “power-&-control-think” at the pass. Work is “convened” and “facilitated” not steered. Full self-expression and listening deeply for emerging needs and courses of action give free reign to the creative force of the collective genius.
Emulating Biodiversity Maximizes Resiliency
Reflecting living-systems, Transition affirms that the more vastly diverse and aware of its interrelatedness a community is, the greater its capacity to innovate and be resilient in the face of crisis.
This unbridled celebration of community diversity is apparent among Rosendale, NY Transitioners. Concerned about a political divide in Rosendale, diverse members of the community formed the Rosendale Improvement Association Brass Band & Social Club. The Transition Rosendale Initiating Group (IG) draws on this spirit and includes members of the band. Connecting the dots between diverse perspectives and sustainability, the IG and Band use art to bridge the communities that Transition events don’t typically reach.
The eclectic Band and Transition Rosendale are a force best experienced firsthand. The Band exuberantly marched (ranging in age from toddlerhood to a beloved centenarian)around Earthfest 2013 grounds to rousing music. The sheer joy and depth of mutual appreciation radiating from their music and meetings is palpable. The arts-focused eco-fervor, and inclusion of everyonein the mix will make Rosendale all the more resilient.
Localization & Self-Organization
Transition recognizes that aligning the way we live with the Earth’s biosphere means the most vital work necessarily happens locally. Local self-organization optimizes sustainable use of the elements that support life. When constant adaptation takes place in localized microenvironments, any shock to the larger system is minimized. Resiliency is maximized. Transition Towns therefore focus on localizing the factors communities need to thrive, e.g. food production, alternative energy generation, economic interchange and more.
Although local self-reliance is a goal of living-systems that seek resiliency, interconnectedness among systems is also essential. The Transition movement’s evolution therefore mirrors nature’s interlocking microhabitats. The Transition network now encompasses thousands of towns, regional and national hubs that function as a loosely connected international latticework of systems. Subsystems nested in geographically larger systems inform the other’s process to enhance the wellbeing of the whole, while cultivating all that is unique to its own particular sense of place.
Mindfully Managed Boundaries: Transition’s Growing Edge
Managing the energy and information flow among interconnected individuals, groups, and systems to allow emergence of the new is Transition’s growing edge. This occurs seamlessly in nature where each entity maintains a balanced flow of energy within itself and in continuous exchange with its neighbors. However, this type of interchange challenges Western minds conditioned to focus on disconnection, separation and competition.
Through environmental work together, Transitioners try to deeply consider how they treat each other and reorient their personal compasses toward true community.
Transitioners acknowledge that the movement is an evolving experiment, and that they don’t have all of the answers. They aren’t intent on finding perfect solutions, but like living-systems, seek experimental pathways that meet the need of the hour and can be refined over time. When something doesn’t work, Transitioners embrace new behaviors and adapt to emergent circumstances. Each time they shift course, the complexity of their relationships is deepened and they become more adaptable—more resilient.
We’re all invited to emulate nature’s living-systems and be part of the great experiment as we “hold the space” in these critical times for the emergence of the new.
“All the forces in the world are not so powerful as an idea whose time has come.”
–Victor Hugo
Pamela Boyce Simms is a Certified Transition Trainer,
Mid-Atlantic Transition Hub (MATH) of Transition US
Transitionmidatlantic.org ~ TransitionUS.org