Billiam van Roestenberg Multitasking Down on the Farm
by Tod Westlake 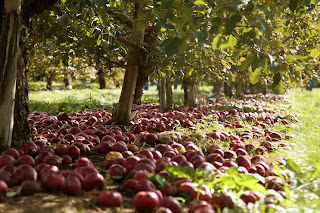 Liberty View’s apple crop was hit particularly hard.
Clintondale farmer Billiam van Roestenberg is a busy man. In addition to running his Liberty View Farm, which consists of 2,000 apple trees, extensive vegetable gardens, and the usual assortment of chickens, pigs, and goats, he—along with his partner René de Roneque—also publishes a weekly newsletter called Cultivating Communities that goes out to 25,000 recipients. Though Billiam moved to Clintondale from New York City a little over 10 years ago, his farm has blossomed into a regionally, and nationally, recognized endeavor, with Billiam, and one of his chickens, appearing on the Martha Stewart Show. The attention he’s received, and the success of the newsletter, are a reflection of the overall philosophy of the farm.
“We’ve been very enthusiastic from day one about community involvement,” Billiam said.
Bringing people together, and having them share their ideas, helps everyone in the community, he believes. He calls this idea “cross-pollination.”
“We find that when we cross-pollinate and support one another, we each have our own sphere of influence, and we can really make a great impact,” Billiam said.
While he acknowledges that people in the community often compete with one another, putting people’s heads together in order to solve problems is ultimately a more fruitful endeavor.
“More often than not, when you collaborate, great things can happen,” he noted. “You save time and energy and your sphere of influence grows exponentially. So it’s a really powerful, simple thing to do, whether it’s with friends or family or your neighborhood.”
Interestingly, Billiam didn’t set out to publish a widely read newsletter. It instead grew out of his advocacy for gay marriage.
“The newsletter, believe it or not, was an extension of what I did back in 2004 for the weddings in New Paltz,” Billiam said.
Billiam recalled that after he had received international attention in February 2004 for being a member of the first gay couple to be married on the East Coast, he began receiving countless emails.
“I was receiving sometimes hundreds of emails a week from people wanting to get involved in the same-sex equality movement,” Billiam said, adding that his own activism began when he had to register for the Selective Service.
“I was signing up to go to war, to defend my family and friends, and at the cost of life and limb I would support everyone, and I found that it wasn’t reciprocated [by the government],” he said.
This advocacy led him to begin compiling an email list as early as 1990, when the Internet was still in its infancy. Later, after a failed same-sex marriage vote in the state senate in 2009, even more people began to contact him. The newsletter, therefore, is another example of cross-pollination.
“It’s 100 percent about promoting different businesses and agro-tourism here in the Hudson Valley. It’s for families and children, and healthy, beautiful things to do,” he said. “Shut off your television and get involved in the community.”
This community involvement will hopefully pay dividends going forward. Billiam, like many other farmers in the region, was dramatically affected by Hurricane Irene and Tropical Storm Lee.
“We’ve had two 500-year, historic storms in the course of two weeks,” he said.
Liberty View Farm is located in the “bottom of a soup bowl,” as Billiam put it, so runoff tends to affect his area harder than other locations.
“There’s all this apple orchard on the hills surrounding us,” he said. “So the water came right down on us.”
He said that there is a storm control system on his property, but it was simply overwhelmed by the sheer volume.
“Our greenhouse and all of our vegetable produce was one-and-a-half to two-feet underwater,” he said. “This includes most of our orchard. The apples got stressed and dropped. So, we lost virtually all our apples, and in essence all our produce.”
Billiam said that the storms were unlike anything he’d seen before: “It was truly unbelievable.”
Despite this setback, Billiam and René are looking on the bright side. Liberty View Farm has become a highly desired spot to host weddings, Billiam said. So he’s been keeping busy with these events. Liberty View is also a B&B, for those who are looking for overnight accommodations in the area.
For more information on the B&B, hosting a wedding, or to sign up for Billiam’s newsletter, please visit libertyviewfarm.biz. You can also email Billiam at NaturallyGrownApples@gmail.com.