Communities and farmers come together for support 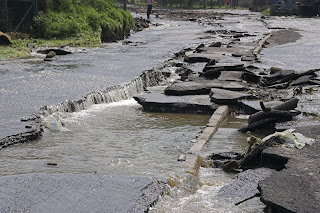 Roads are no match for a rushing river
The final weeks of summer 2011 are likely to stick in the collective memory of Ulster County residents for many years to come. With two unprecedented rainstorms—beginning with Hurricane Irene and culminating (we hope) with the remnants of Tropical Storm Lee—some area residents experienced nearly two feet of rain in a little more than a week. This rain caused unprecedented damage throughout the county, with many areas completely inundated by the runoff.
But it was in the higher elevation areas that things were particularly frightening. The rains pummeled these areas, the sheer volume of water overwhelming the capacity of the numerous small streams and river valleys. Roads and bridges were washed away, utility poles and trees creating piles of debris that in some areas will likely take months to clean up. More importantly, homes and businesses were totally destroyed, with hundreds of residents forced to flee to shelters. Many of these folks are now also left homeless, having lost everything as the fast-moving waters undermined their lives as well as their physical property.
Unprecedented Flooding
Ulster County Executive Mike Hein has seen much of the devastation firsthand, having toured the county both during and after the storm—in particular those areas that saw the worst of the flooding in the western part of the county. Hein said that the last several weeks of August and September were trying, to say the least, with nature seeming to go out of its way to remind us of its primacy over us mere human beings.
“In those two weeks we had an earthquake [referring to the Virginia-centered quake that rattled our area], we’ve had a hurricane, and we’ve seen the remnants of another hurricane,” Hein said. “That’s a rough two weeks. We’ve seen the worst natural disaster in the history of Ulster County.”
Hein said that geologists have been saying that the flooding is a once-in-400-years event, and that nothing like this exists in any of the records for Ulster County.
The morning that Hurricane Irene struck, Hein said he was traveling to his office in order to begin monitoring the storm situation when a manhole cover on Washington Avenue in Kingston was literally blown into the air in front of him.
“The manhole cover launched about 10 feet into the air, and the geyser blew about 35 feet into the air right in front of me because of the water pressure,” Hein said. “It was like a depth charge. That was my introduction to Hurricane Irene.”
Hein said that, as the storm unfolded, he had asked the sheriff’s office for reports on different areas that were expected to be hit hard. But road conditions made this difficult.
“It quickly became obvious that all the major arteries in Ulster County—Route 28, Route 209, Route 299, Route 32, and the Thruway—were all cut off,” Hein said.
Later, Hein and his team made their way up Route 28 from Kingston, where they saw that a number of cars had been swept off the road.
“These cars had literally been tossed around like ragdolls,” Hein said.
The vast size of Ulster County, according to Hein, means that its geological makeup is quite varied.
“We have farms and low-lying areas that tend to flood, which lasts much longer [than flashfloods] and cause significant crop damage,” Hein said.
But it’s the mountainous areas that can really be hit hard when a tremendous amount of rain falls in a short time. As the runoff from the storm accumulates in the gullies, streams, and river valleys at higher elevations, it simply has nowhere to go but down. And, as more rain falls, the volume and speed of this runoff can quickly become a force of nature that is capable of destroying just about anything in its path.
“It was like a bowling alley,” Hein said. “You had huge rocks smashing into other huge rocks. I saw a house ripped off its foundation, turned 180 degrees, and then thrown 100 yards downstream. It was the equivalent of Colorado rapids, is probably the best way to describe it. The most frightening part was, there were two adults on the roof and a child.”
The weather was so bad that it was too dangerous to fly a chopper in to rescue the family. In the end, members of the Ulster County Dive Team, along with local firefighters, rigged rescue lines and were able to reach the family before their house crumbled into the raging waters.
“The rescuers literally risked their lives to save these people,” Hein said. “It’s one thing when you read about it in the paper, it’s another thing when you see it firsthand.”
Farms Devastated
The Ferrante family has seen its share of flooding. For just over 50 years they’ve operated Wallkill View Farm from its location right outside New Paltz on Route 299. The farm’s close proximity to the Wallkill River means that late winter/early spring floods have become almost a matter of routine, according to Carol Ferrante, who with her husband Peter founded the farm in 1960. But this year’s flooding is nothing like what the family has experienced in the past.
“This is the worst we ever had,” Ferrante said.
The big problem with this particular flooding event was its timing, according to Ferrante.
“We’ve never had a flood in August,” Ferrante said. “We were in the heart of our picking season on the farm—and this year’s crop is totally destroyed.”
And it was really two floods after which the Ferrantes had to clean up. The combined losses from these events include corn, pumpkins, tomatoes, peppers, and other late summer vegetables. But this loss is going to carry over into the fall.
“We also lost all the crops for the fall, all the cauliflower, the broccoli, leeks, kale,” Ferrante said. “The losses are too numerous.” 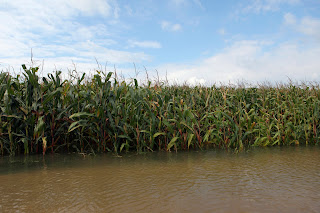 Some of the fields in the region were completely
covered by flood waters.
After the devastation caused by Irene, the whole family pulled together and engaged in a monumental cleanup effort. They were just about ready to reopen for business when the remnants of Lee came through.
“We got it all cleaned up,” Ferrante said. “Extended family came down, the kids came home for the [Labor Day] holiday weekend, the grandchildren, everyone helped out. Two days later the second storm hit.”
Ferrante said that she stood at her living room window and watched as “acres and acres” of pumpkins simply floated away. She said the feeling of powerlessness she experienced is something she will not soon forget.
The Ferrantes, however, have been resilient in the face of adversity. As of the weekend of September 17, the farm stand has reopened, with the family bringing in vegetables grown at other farms in the local area.
“It’s going to take a little while to get over it,” Ferrante said. “But we’re back, we’re open, and we’re ready to move on.”
Shandaken Shaken
Town of Shandaken Supervisor Robert Stanley had his hands full both during and after the storm. The town is one of those regions with high, mountainous areas crisscrossed with narrow river valleys that received a high concentration of runoff. Stanley says that there is nothing in the record books that compares with what the town has witnessed during and after the storms.
“All the gauges, all the records indicate that this is the worst storm on record here in the Esopus Valley and here in Shandaken,” Stanley said. “We were anywhere from five to 10 percent above previous high-water records.”
These high waters meant that many bridges and culverts were washed out in the early hours of the storm.
“We lost just about every bridge on Oliverea Road,” Stanley said. “Everything except for McKinley Hollow Bridge.”
Given the immediacy of the situation, the town had to move quickly to ensure public safety.
“We were in relief mode as soon as Irene hit,” Stanley said. “We had several water rescues and several areas that were cut off.”
Stanley said that first responders had to take to ATVs in order to reach certain locations, running medical and food supplies to those in need.
“We have an intimate knowledge of the area, so we know where people are located, and how to get to them through the backwoods,” Stanley said. “We were able to circumvent the usual thoroughfares.”
At the nearby Belleayre Mountain, an emergency shelter was set up. More than 120 adults and 40 children stayed at the lodge the first night of the storm. In the ensuing days, they also helped to provide more than 1,200 hot meals, as well as acting as a distribution center for more than 4,000 Meals-Ready-to-Eat provided by the Red Cross.
Stanley said that one of the good things that came out of the devastation is the large number of volunteers who came out to help their neighbors. The town had previously discussed the possibility of creating a Civilian Emergency Response Team (CERT) in order to have people in place who are ready to volunteer during such disasters. Stanley believes that there is now a good nucleus of people for the CERT proposal to move forward.
For more information on the relief effort, how to get involved, and other information such as bridge and road closures, be sure to visit www.co.ulster.ny.us/recoveryinfo.html. You can also visit Belleayre Mountain’s website at belleayre.com. Wallkill View Farms can be accessed and supported at wallkillviewfarmmarket.com.