The colder the winter, the better the harvest
by Rebecca Shea 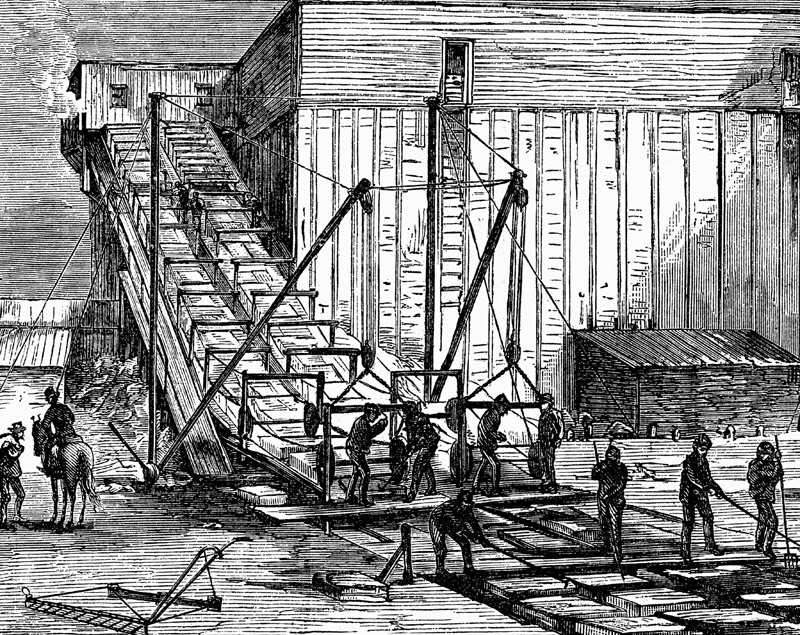 waterways and the Hudson River. According to their publicized data as of January 22, the ice between Poughkeepsie and Kingston averaged between 5 to 10 inches thick with some areas measuring between 6 to 12 inches thick.

Such conditions in the 19th century would have been perfect for ice harvesting on the Hudson.
The Hudson Valley area was once considered the ice port of America—servicing New York City, cities in the South, and places as far away as Florida and even South America. The ice business was thriving from about 1865 to 1925.
Sure, other rivers and ponds in places like Maine and Pennsylvania were part of the ice industry, and it is true that a Bostonian—Frederic Tudor, aka The Ice King—pioneered and improved the industry, but the Hudson River’s natural ice dominated the industry.
Hudson Valley natural ice blocks were shipped and sold throughout the year to fishmongers, households, restaurateurs, shopkeepers and anyone else who needed to keep food cold. At its peak in the late 19th century, the Hudson Valley area was providing close to two-and-a-half million tons of block ice yearly.
The process of harvesting ice began as soon as the ice attained a thickness of about nine inches. Men and horses using ice ploughs cut sections of ice according to the size desired, working close to making squares about 36 x 22 inches in size. The next operation included a steel ice chisel that tapped out large rafts of blocks, generally 100 blocks a grouping. These enormous rafts were then towed by horses toward a canal cut within the harvesting pond leading to the icehouse where men with tridents broke up the raft into single blocks. The blocks were guided onto cleats attached to chains powered by steam that pulled the blocks up to the icehouse.
Stowing the blocks followed a quick and orderly process coordinated by skilled men moving the 200 pound blocks with bars over floors of icy water. The blocks were arranged with a 2 to 3 inch spacing between to allow for air circulation and melt-off. When the icehouse was filled, loose hay was thrown over the vast mass of ice for insulation.
At one time, the monolithic ice warehouses holding all this activity were scattered along the shoreline of the Hudson River. Ice harvesting, also known as winter agriculture, was an important off-season occupation for many farmers and boys. Working the ice took muscle power and teamwork. A man was paid approximately $1.50 per 10-hour day—$0.75 for a boy and $4 for a man with a team of horses.
By the 1920s the natural ice industry was collapsing. The manufacturing of plant-ice, the introduction and marketing of electric refrigerators, and the pollution of the Hudson River all coincided to cause the industry’s demise.
The icehouses along the Hudson’s shoreline were quickly deemed ugly and intrusions on the landscape. They decayed, were demolished, or were sold to mushroom growers who found some success in their damp, dark architecture.
Firsthand accounts from the heyday of ice harvesting are difficult to find. Most participants are no longer alive. Any readers who have family stories of ice harvesting, please contact the writer on the Country Wisdom News website for sharing.
But for your own ice harvesting experience consider attending a community ice harvest or winter festival. The Adirondack hamlet of New Bremen performs an annual ice harvest. The volunteer firemen of the hamlet cut up to 1,000 blocks of ice and store them for sale in the summer for festivals, campers, and picnickers. National Geographicrecognized New Bremen as one of the last community ice harvests still going on. Hanford Mill Museum in Delaware County, Millers Mills in Central New York, and Rockland Lake in Rockland County include ice harvesting demonstrations at their winter festivals.
There are exhibits in local museums and historical societies to visit that feature original tools used in the harvest, detailed pictures, and sometimes great dioramas that elucidate the process.
Discovering industries and agriculture of the past is part of the thrill of living in the Hudson Valley. It provides an opportunity for a better understanding of not only the past but also the present—and it always offers possibilities for the future.
Interestingly, there is an audio project available online and for mobile devices called Winters Past. A Soundwalk about Ice Harvesting will be released on February 9. www.winterspast.org