Families, farmers, and tradesmen were settling in Marbletown several decades before it became an official area of any designation. The high ground between the Esopus and the Rondout had fifty-three houses by 1672, though it would be 31 more years before a patent for the area was granted to a group of nine inhabitants.

Many a family settled and stayed. Louis Bevier purchased a Marbletown home for Louis Jr. and his wife Maria in 1715, and the property didn’t change hands again for 223 years, when Bevier descendants donated it to the Ulster County Historical Society. Like many of the families who lasted generations, the Beviers farmed. Others worked as stonecutters in the Catskills foothills. Seven diverse hamlets—High Falls, Stone Ridge, Kripplebush, Lyonsville, Lomontville, Atwood, and North Marbletown—grew up in the region, with each their own handfuls of businesses, churches, firehouses, and schoolhouses. It was 1844 before the town was officially incorporated, after pieces had been lopped off to form parts of Olive and Rosendale.
During the American Revolution, Marbletown took a very brief turn as the capitol of New York State. Following the invasion and torching of the Kingston stockade in 1777, court proceedings and meetings of the Council of Safety were held in homes in Marbletown for about a month. The house where the court convened, a tavern belonging to Johannis Tack, still stands—across the street from the Wynkoop Lounsberry house, where General Washington spent a night in 1766. 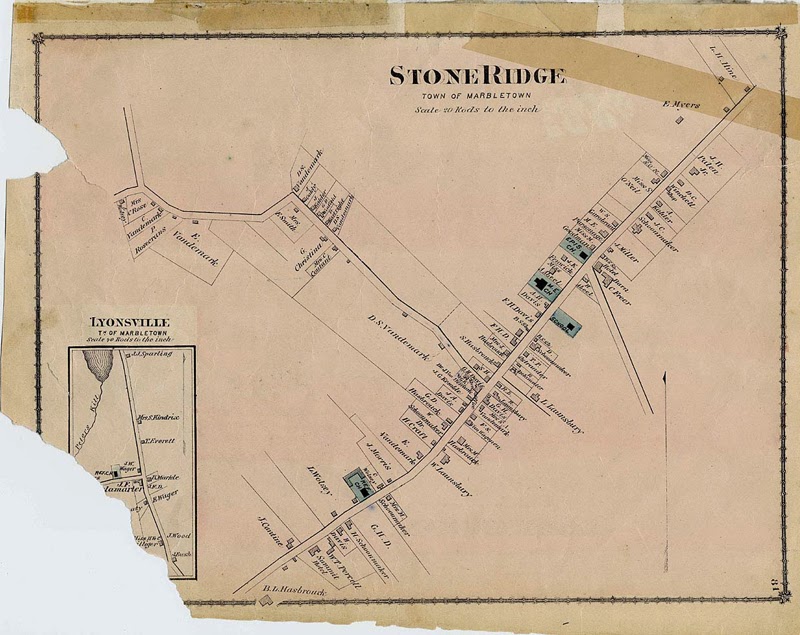 The central hamlet of Stone Ridge is one of the meatiest historic districts in the United States. Of the 38 lots that make up the seventy acres along what is now 209 (previously Old Mine Road), 33 contain historically important sites. With the exception of Town Hall and the mini-mall anchored by Emmanuel’s Marketplace, the central strip has seen very little change since the early 20th century, as evidenced by the multitude of carefully preserved stone buildings and lovingly kept clapboard farmhouses.
Early in 1800s, city residents had already begun building or buying second homes in Marbletown to let loose and take in the country air. “A pleasant day, still warm. We all amused ourselves today in a thousand different ways, eating peaches seems the invariable mode of filling up all spare time,” wrote one such weekender, Julia Lawrence Hasbrouck, in her diary in 1842. “Warm, and sultry, with heavy showers. I find it impossible to keep the children clean, or in order, they are wild as crows.” (Some problems persist across the centuries!) In 1909, Hasbrouck’s daughter would donate the family home to the town for a library, a purpose it is still serving.
Life in the hills of Lomontville or the Vly has always been—and to some extent still is—quite different from life in the settled environs of Stone Ridge. But it was the little hamlet of High Falls that would find itself a bustling center of commerce, as the Wurts brothers, armed with picks, shovels, mules and explosives, carved the D&H canal out of the wilderness to carry Pennsylvania coal to Kingston. The canal operated from 1828 through 1898, making this small hamlet the rough-edged rock star of the Marbletown family, an aura that has never quite faded. In the 20th century, High Falls was where the early European modernist artist Marc Chagall hid out with his pregnant mistress, bicycling around trying to barter paintings for necessities in broken English. Natalie Wood and Warren Beatty filmed a portion of Splendor in the Grass in High Falls. 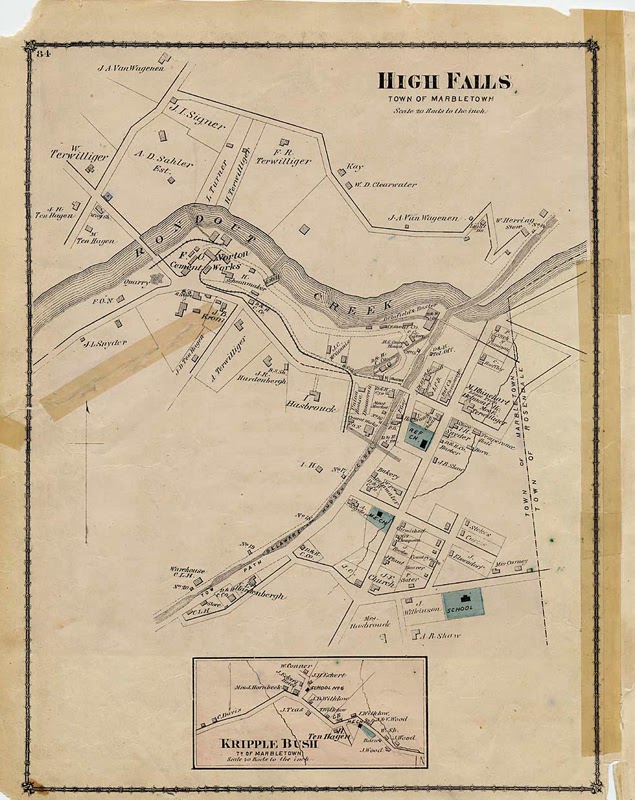 In the first half of the 20th century, a religious leader called Father Divine established a strong presence. Some called his outposts “Heavens.” Divine preached against intoxicants, sex, and debt; many of his followers opened highly-regarded businesses. He was a black man and not universally welcomed—there was a cross-burning at one of his properties in Lomontville—but a lot of residents came to appreciate the group’s business ethics and 25¢ chicken dinners.
In the 1960s, Ulster County Community College broke ground on what had been Davenport and Leggett farmland; you can still see the apple trees in spots.
Around the turn of the 21st century, a re-visioning process drew a great deal of enthusiastic participation from Marbletown residents. There’s an active multi-arts center (MaMA). And in 2011, Marbletown became only the second town in New York State with a Transition movement.
For all its well-preserved history, Marbletown has always been a forward-looking sort of a place. Where else would you find a rock-n-roll hardware store? A counseling center/art gallery/gift shop in a strip mall? Get to know Marbletown, and marvel at the sprawling, bucolic, spiritually rich center of Ulster County spirit.