From River Fires to Climate Change: The 45-Year History of Earth Day

by Melissa Orozco-McDonough
The 1960s are well known as a time of conflict for the nation, when tensions ran high as the rigidity of the previous decade battled new movements towards individual freedom. Whilst most politicians and corporations were focused on prosperity achieved through industrialization, others were beginning to realize the swift, drastic, and negative impact that industrialization was having on the environment. Suddenly, the gas guzzling cars and factory smog that once served as visual signs of ‘prosperity’ for the nation, were exposed as the enemies—the dark and dangerous grim reapers at our doorstep, threatening the imminent death of the environment as a whole.
In 1962, Rachel Carson published Silent Spring. A New York Times bestseller, the book served as a starting point for the environmental movement, successfully stirring national awareness of the dangers of pesticides to America’s countrysides and waterways. The book itself sold more than half a million copies in over 20 countries and was the first piece of writing to effectively raise concern for the environment on a microscopic, living organism level as well as the public health level. Riding on the spark of awareness the book had created, President John F. Kennedy, accompanied by US Senator Gaylord Nelson, went on a speaking tour, in an effort to further raise awareness of environmental issues and promote change. Despite their efforts, the environment remained on the back burner as a low ranking priority amongst most politicians and American citizens.
It wasn’t until 1969, when Cleveland, Ohio’s Cuyahoga River literally burst into flames due to unregulated chemical waste disposal methods and Santa Barbara suffered a massive oil spill (the largest spill to date at the time), that public attention finally turned towards environmental health, protection, and regulations. Inspired by the anti-war protests and ‘teach ins’ of the latter part of the decade, Senator Nelson came up the idea for a ‘national teach in,’ focused specifically on the environment. Thus, the concept for Earth Day was born. Nelson’s ultimate goal was to “shake up the political establishment and force this issue onto the national agenda,” but in order to do so he undoubtedly needed some help. Nelson first approached then Republican Congressman Pete McCloskey, and was able to successfully persuade him to join his team as co-chair. He then recruited environmental activist Denis Hayes as his national coordinator, who went on to build an 85 member staff to help promote Earth Day events across the nation.
In the autumn of 1969, after organizing his team and setting the ball in motion, Nelson announced his Earth Day concept to the nation, inviting everyone to get involved. The public response was phenomenal. The movement took off on a grassroots level, to an extent that neither Nelson nor Hayes had even expected. On April 22, 1970, 20 million Americans, of all ages and from all walks of life took to the parks, streets, and auditoriums to celebrate the very first Earth Day. Large rallies were held in most major cities, including New York, Philadelphia, Chicago, and L.A. New York’s then Mayor John Lindsay went to the extent of closing off traffic to a portion of Fifth Avenue, at the request of the NYC Earth Day organizers, and even offered them the use of his offices and staff. He also made Central Park available for the event, and went on to speak at a Union Square Earth Day rally.
The inaugural Earth Day was enormously successful, and led to much of the necessary environmental protection legislation that has come into existence since; such as the Clean Air Act, Water Quality Improvement Act, Resource Recovery Act, Toxic Substances Control Act, the Federal Environmental Pesticide Control Act, Endangered Species Act, and the Safe Drinking Water Act. Most importantly, the first Earth Day led to the December 1970 Congress authorization for the creation of the U.S. Environmental Protection Agency (EPA), a new federal agency formed specifically for the taking on of environmental issues. On it’s 20th anniversary, in 1990, Earth Day went global, with Hayes’ creation of the “Earth Day Network,” which spread environmental awareness to more than 140 nations and over 200 million people across the globe. This particular Earth Day’s activities boosted recycling efforts worldwide, and helped lead to the 1992 United Nations Earth Summit. 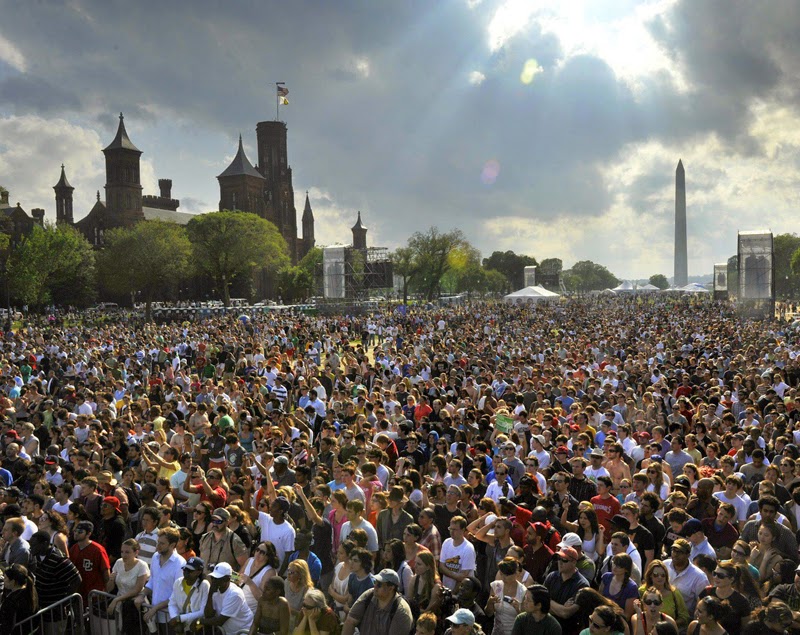 In 1995, due to his continuous dedication as well as the global success of Earth Day 1990, Senator Nelson was awarded the Presidential Medal of Freedom by President Bill Clinton; the highest honor that can be given to an American civilian. Earth Day 2000, the 30th anniversary, focused on clean energy and global warming, and was the first Earth Day with the ability to utilize the internet as an organizing tool, the result of which was the participation of hundreds of millions of people throughout over 180 nations. Earth Day’s 40th anniversary, in 2000 was a bit more challenging, due to climate change deniers, a less interested public, high-powered oil lobbyists, withdrawn or unresponsive politicians, and a divided environmental community. However, despite challenges the Earth Day Network was able to organize a successful climate rally, held on the National Mall in Washington D.C., that attracted 225,000 participants and reestablished Earth Day as an important and powerful focal point.
The battle for a clean and healthy environment rages on today, with climate change becoming an increasing overall concern for the nation. The Earth Day Network now estimates that over one billion people globally participate in Earth Day events, making it the “largest secular civic event in the world.” For this year, the EDN, with help from the Global Poverty Project, has organized a “Global Citizen 2015 Earth Day” event to take place once again on the National Mall, with goals of calling on world leaders to solve climate change and end extreme poverty. It remains to be seen how many will participate in this year’s 45th anniversary celebrations and events, but it’s clear that a call to action has never been more important for our environment than it is at this time. So grab your friends and family, find an Earth Day event near you, and get out there and help. The Earth needs YOU!