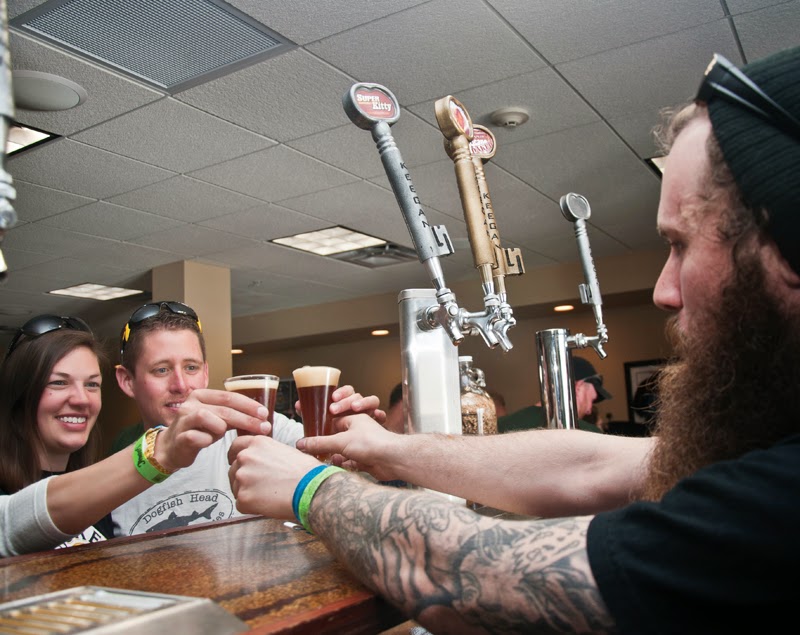 New York Craft Beer Festival on April 27 and 28. The 15th annual festival took place at Hunter Mountain Ski Area and was blessed with gorgeous weather. The warm spring sun silently melted away the last remnants of snow on the ski runs, which set the backdrop for the festival. Hunter’s ski lifts may have sat quiet and still, but the area surrounding the beer tents outside were bustling with motion as people danced to the blues-infused sounds of the Taz Band.

Eighty New York breweries were represented at Tap New York—serving over 250 different brews. The wide range of varieties made the event a beer lover’s dream, but the thought of trying them all was a bit daunting. Still, it seemed that most of the attendees were doing their best to sample at least one glass from every brewery from across New York.
There were about 5,800 attendees this year, making it the largest Tap New York Festival to date. Everyone who went seemed intent on having a great time. Despite the abundance of alcohol, there were no visible signs of belligerence or unruly conduct. Perhaps it was just the liquid courage, but it seemed that everyone wanted to be sociable. Spontaneous conversations and networking opportunities seemed to occur at every corner of the Hunter Mountain base area.
It was very exciting to have the opportunity to discover new breweries from all across the state, and as far away as Buffalo. One could not help but to feel fortunate enough to live in the mid-Hudson Valley and have easy access to such a wonderful event. It also became clear that New York has a rich variety of microbreweries to share with the country. Perhaps the Hudson Valley will become synonymous with beer in the future similar to California’s Napa Valley in regards to wine.
Tap New York was also a great opportunity to sample the food of some great local restaurants. One attendee, Scott Seltzer, commented “You should have seen the free-for-all on the corn dogs.” However, it seemed that the main attraction was certainly the beer.
In addition to the beer and food, various New York state vendors also took tables to present beer-related services. One such table was run by Farm House Malt, which distributes malt. They offered a small paper cup of barley malt to chew on. It actually proved to be a delicious snack. Marty Matrazzo demonstrated how malt is cured and showed examples of what happens to the grain if it is prepared improperly.
Tap New York has also become a prestigious local beer competition. There were three primary awards including one that was new to the festival in 2013. The new award is the Governor’s Cup for best New York State Beer. A second award was the F.X. Matt Memorial Cup, which is named after Francis Xavier Matt, who was the founder of Saranac Beer. The F.X. Matt Memorial Cup is awarded to the Best New York State Brewery. The third award, The Mathew Vassar Brewers’ Cup, is named after the Hudson Valley’s own famous brewer from the 19th century and awarded to the best Hudson Valley Brewery. The 2013 F.X. Matt award went to Six Point Brewery in Brooklyn, the Mathew Vassar Brewers’ Cup was awarded to Lake Placid Pub and Brewery, and the first annual Governor’s Cup was proudly given to Peekskill Brewery for their Higher Standard Imperial IPA.
With 2013 Tap New York being so tremendously successful, it will certainly be a long wait for the 2014 event. The anticipation of sampling the delicious new concoctions that New York state’s brightest minds have brewed up will be unbearable.
Caption:

Janine Weyls and Chris Baker of Highland, NY are served two cold ones by Zach Kelly of Keegan Ales in Kingston.