The more we invest in wind power, the better it gets
by Terence P Ward 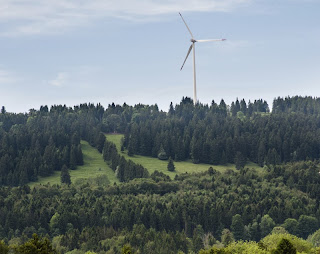 Talk of wind power conjures up visions of massive turbines stretching for miles out west, or offshore

projects such as Cape Wind, which is set to begin construction in Nantucket Sound. Wind might be considered one of the best and worst understood sources of energy: on one hand, it’s not difficult to see how moving air can be turned into electricity; on the other, the consequences of building that infrastructure are complex. Wind resources in the Hudson Valley can’t support wind farms like the ones out west and proposed for offshore development, but nevertheless the number of locals who are generating or using wind power is growing.

Not surprisingly, the best places to harness wind power is at higher elevations. Doug Passieri, president of Pine Plains-based Hudson Valley Wind Energy, LLC (hvwindenergy.com), specializes in the siting and installation of wind turbines to power individual farms and residences. He cautioned against assuming that a property’s wind potential is self-evident. “If you go to Red Hook, for example, you might not find any suitable properties because it’s all flat,” while a mountainous town may have many suitable locations. Wind speed and direction changes with elevation, therefore it’s not always obvious from the ground how much energy can be produced before an assessment is made. In a best-case scenario “a turbine could support a small farm or single residence entirely, producing 10,000 kilowatt hours a year,” he said, or the equivalent of “an electricity bill of $150 to $200 a month.”
Wind is still at the expensive end of the technology curve, and largely depends upon rebates and tax credits to make it affordable in the short run. Passieri said that the 10,000-kilowatt-hour turbine in his example might cost a hefty $75,000 to install, with $35,000 coming back to the owner through various grant programs; compare that to a similarly-sized solar array, which could cost $35,000 and about $12,000 back. Owners can also write off the installation costs from federal income taxes over five years, and of course, eliminate their electricity bill.
There are even smaller-scale wind turbines, such as the one mounted atop H. Houst and Son hardware store in Woodstock two years ago. Co-owner Jodie Houst says that it powers “about half the lights in the store,” but isn’t expected to pay for itself for several more years.
Small-scale, site-specific turbines are where the wind power is being generated in the Hudson Valley, agrees Stephen Stuart, co-executive director of the Sullivan Alliance for Sustainable Energy (sullivanalliance.org). However, a forward-thinking plan such as what the SASD is promoting in Sullivan County can also yield potential sites for larger, community-owned or commercial wind projects.
“We commissioned a county-wide study of the wind to determine where we might find resources for community-owned wind farms, as well as site-specific turbines for municipal buildings, manufacturers, and other commercial buildings,” Stuart said. “People say, ‘It’s always windy here,’ but you need a consistent speed of wind to generate power.”
SASD performs site assessments of individual lots, using tools provided by the New York State Energy Research and Development Authority (NYSERDA), which is also the main governmental underwriter of alternative energy projects locally. Like Passieri, Stuart says that the numbers must make sense in order for a project to move forward. “We need to make sure that wind is a solid investment for you.”
Living in the Hudson Valley, many people are not in a suitable location to generate their own wind power. But they can still consume the renewable power, at least indirectly, according to Christine Dempsey, an independent associate with Viridian Energy, a third-party energy supply company that focuses on greener energy production. Her customers can choose to purchase either 50% or 100% of their energy from wind farms. While the electricity flowing into their homes doesn’t necessarily come directly from a wind farm, the purchase of wind power replaces electricity in the grid that comes from other sources, such as coal-fired power plants, and contributes to the “greening” of the entire system.
But wind has its own resistance, some of which comes from others concerned about the environment. In the Ulster County town of Denning, actor Judd Hirsch’s neighbors are lined up in opposition to his plan to build a turbine to power his home, saying that its height (177 feet) and noise (43 decibels, according to the manufacturer) would be too disruptive to the rural landscape. Other concerns include the long-term health effects of living near a turbine, both for nearby humans and bird populations, and safety hazards posed by icing on the blades or a turbine catching fire.
While Hirsch is reportedly dismissive of his neighbors’ concerns, telling the New York Times that, “Behind it, I believe, is the pollution of jealousy and the pollution of stupidity,” Stuart is more respectful, and prefers to engage in the debate with facts, such as the study of 40 wind farms and how they impacted birds.
“They found that there were fewer than four bird deaths per megawatt per year,” Stuart said, and even that number is reduced by new designs and siting criteria. Wind farms which were built in migration paths “are shut down for that part of the year,” he said.
There’s so much resistance that proponents maintain a website to address concerns, www.truthaboutwindpower.org. On the bird question specifically, it says that some 200,000 birds collide with turbines each year, and compares that number with those killed flying into buildings (97-970 million) and cell phone towers (up to 50 million).
Dempsey thinks that the wind industry will only benefit from increased regulation, saying that laws would put people’s minds at ease. “There is a lot of truck traffic when turbines are being constructed. People are concerned about low-frequency sound or a strobing effect on sunlight if they’re built too close to their homes. I’m not an engineer, but the idea of regulation seems logical. The industry is pretty free and unregulated right now.”
While sometimes controversial, interest is blowing wind’s way.