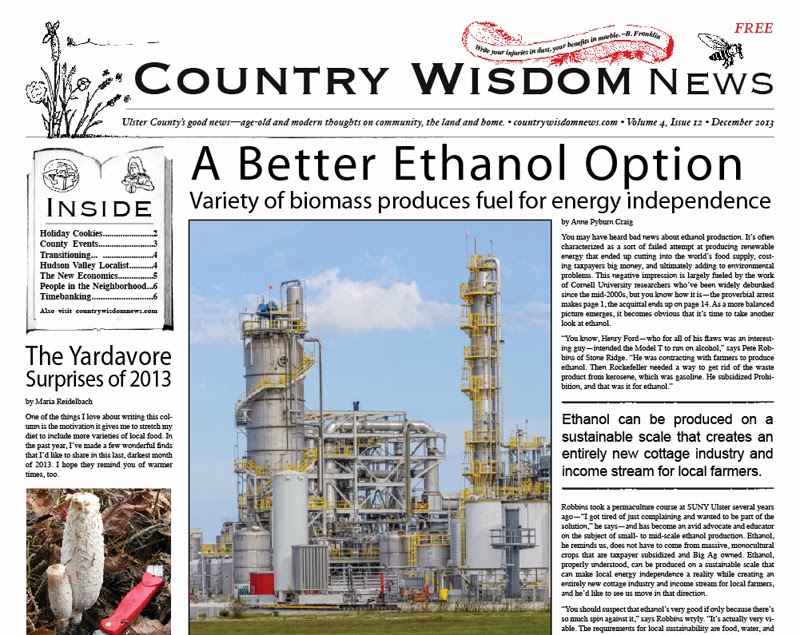 Your recent article on ethanol as a fuel was interesting and provided a lot of food for thought regarding local production. However, I believe it presented an oversimplified impression that producing fuel grade ethanol in your backyard was as easy as making compost for your garden. Unfortunately it’s a lot more complicated, involving fermentation and chemical separation and purification steps that require technical knowledge and expertise. Furthermore, ethanol is flammable and its vapors are explosive, so any facility producing ethanol would have to be properly sited and adhere to various regulations to meet fire codes and OSHA rules. For things like this I usually ask the question, if it’s so good why isn’t anybody doing it? Perhaps in a follow-up article, Messrs Robbins and Blume can provide an outline of how a small-scale operation would work, and address some of the issues I’ve raised.
Barry Juran
Saugerties, NY
Writer responds:
It’s true that making ethanol is more complicated than composting or even home brewing. Much more in-depth information, including plans for a home ethanol still, can be found at www.permaculture.com and www.motherearthnews.com, among other places.
I should have made more of a point of saying that this is neither child’s play nor rocket science, and that you do need a permit to distill ethanol. Thanks for catching my lapse.
Anne Pyburn Craig
Promoting ethanol sounds dangerously like another “bridge” fuel argument, similar to methane (a “natural” gas) vs. oil or coal: it’s cleaner, that’s “-er” comparative. It’s not clean. Why go for another halfway measure that still puts CO2 into the atmosphere?
The Arctic is on track to be completely free of summer ice by September 2015, making the Arctic Ocean completely dark at the time of year with a great deal of insolation, thus absorbing yet more heat, allowing yet more methane hydrates to melt, emitting yet more methane directly into the atmosphere, creating an inexorable feedback loop. (http://ameg.me)
Even the global, corporate, conservative, International Energy Agency (IEA) is trying to get the attention of policy makers. “World headed for irreversible climate change in five years, IEA warns” the headline states on a 2011 article that appears in the Guardian. (www.theguardian.com/environment/2011/nov.09/fossil-fuel-infrastructure)
“…the world is on track for warming of 6˚C by the end of the century—a level that would create catastrophe, wiping out agriculture in many areas and rendering swathes of the globe uninhabitable, as well as raising sea levels and causing mass migration, according to scientists.” (www.theguardian.com/environment/2012/apr/25/governments-catastrophic-climate-change-iea)
And we’re all familiar with the scientific consensus that 2˚C is the tipping point. Humans cannot afford the promotion of any mass technology that puts more CO2 into the atmosphere. We are also familiar with the understanding that renewable energy technology exists, is affordable, and is absolutely necessary. Plus, electric cars are slowly coming into vogue—at a pace set, unfortunately, by industry rather than consumers. (www.whokilledtheelectriccar.com)
This is where we must put our resources. Any human energy devoted to a halfway measure at this point in time merely speeds up our race to catastrophe.
Carl Arnold
I’ve just finished reading the article on Ethanol on the cover of Issue 12 [A Better Ethanol Option, December 2013, page 1]. It’s very well written and it steered my attention back to what I call “Transitional Energy Solutions.”
My background is in automotive tech, mechanical engineering, solar thermal, solar electric, and some geothermal and wind. I’ve also been doing work as an outreach coordinator for RUPCO and Clearwater to promote New York State Energy Research and Development Agency’s (NYSERDA) Home Performance program.
I agree with Mr. Pete Robbins that smaller, decentralized plants are the solution. What if right here in Ulster County we could produce and provide all the fuel for our nearly 200,000 residents…what if?
Again, excellent written article! I’m also reading the Net Zero homes in New Paltz article. I did some of the solar systems for Green Acres!
Thanks and keep up the good writing!
Hugo Jule
Woodstock, NY
Thank you to Country Wisdom News, Chris Hewitt and Anne Pyburn Craig for getting the word out about Ethanol. I appreciate the responses from readers and will address some of the issues they raised.
I totally agree that we are in need of big, quick efforts, to heal our damaged environment. This is possible, with wise and courageous leadership. Unfortunately, we cannot currently count on leadership to do for us what needs to be done. What we can work on at this time, is to be local, sustainable and self reliant. So local, sustainable, clean, ethyl alcohol production is something we can do, now! This small, local sustainable effort, if repeated in every neighborhood, would have that large positive impact.
It was stated, “It is still burning something in an internal combustion engine.” Can’t argue with that. My question is what is your solution? Electric cars are a good idea. However, for now, about 99% of the electricity comes from “dirty” sources. So burning ethanol is a good solution. As opposed to being a “half measure” it is a progressive, evolutionary step and better than nothing, which is what we have now.
As far as economics, I see ethanol production, at this time, as a community service (a CSE=Community Supported Energy). Participants would receive a living family wage, work under the best conditions possible, and of course ethanol production has to follow all safety guidelines. It is safer than gasoline, being less volatile and with a higher flash point.
If you are still interested in learning more about ethanol, from a more informed source than me, go to David Blume’s website, permaculture.com, buy his book Alcohol Can Be A Gas and the DVD. I am also open to being a part of a local, group discussion about ethanol and the bigger picture: local, sustainable, and self-reliant communities. Additionally, we can discuss all the millions of individuals, groups and organizations that are now working for the greater good that you may not have heard of. Thank you for your interest.
Pete Robbins
Stone Ridge, NY