by Lee Reich
The Well-Dressed, Young Tree
My young trees are now decked out in all their winter finery—arboreal attire, perfumes, and cosmetics that will protect them through the winter. Insects and disease-causing fungi are dead or dormant, but larger, furrier animals now pose a threat. Deer, rabbits, and mice are eager to gnaw on succulent stems, bark, and roots.
And then there’s cold weather to dry out or sunscald the trees. Evergreens are most susceptible to drying out because they lose water through their leaves all winter long. Sunscald, caused by fluctuations in bark temperature, is most likely to occur on the southwest facing bark because that’s where it’s last heated by day before the sun—and temperatures—plummet.
With their thick, tough bark and gnarly, old wood, older trees are better able to fend off animals and cold than young trees. So here’s what my well-accoutered, young trees are wearing to protect them from winter’s woes.
For “footwear,” mulch is all the rage. Leaves, hay, and straw insulate the soil against low temperatures as well as from wide swings in temperature. Evergreens are especially thankful for mulch because it keeps more soil water unfrozen and, hence, accessible to roots during the winter. Never pile mulch right up against any tree trunks, though, or else the trunks may rot and mice not only will have sheltered living quarters, but also bark on which to nibble right at home.
Which brings us to a choice of tree furnishings for keeping animals at bay. Down around a tree’s “ankle,” a legging of 1/4-inch hardware cloth, an eighteen-inch-long cylinder pushed a bit into the ground, prevents mice and rabbits from gnawing at roots and bark near the base of the tree. Higher up in the tree, “perfume” fends off deer. For starters, I’ll dangle a bar of deodorant soap in the branches—one bar per tree, the cheaper the better. In the past, I’ve also used mesh bags containing wads of human hair but my deer, at least, don’t seem to mind that perfume anymore. The efficacy of any perfume in keeping deer away depends on how many and how hungry the deer are, and how easy it is for them to get to neighbor’s trees instead.
Moving on to the condiment department of winter tree wear, we find sprays that make trees taste bad to furry animals. Because these animals are vegetarians, many of these sprays are based on animal products such as eggs or milk. These animals also don’t like hot pepper. Commercial sprays are appropriately named: ‘Deer-Away,’ ‘Chew-Not,’ ‘Hinder.’ The main problem with these sprays is that they wear off over time, so spraying must be repeated periodically through the winter, especially since animal feeding gets worse as winter wears on. Some, such as ‘Deer Stopper,’ have a gummy base that, although making spraying more difficult, keeps the material on the plant for weeks. Once again, the efficacy of such sprays depends on how many and how hungry the deer are, and what else is readily available to eat.
All well-dressed, young trees should have some “makeup” on their trunks. A coat of white latex paint protects the bark from sunscald, reflecting sunlight so that the bark does not heat up during the day. Paper or plastic tree wraps are sold that serve the same purpose. I added bone meal to the paint that I used last winter, as a friend had suggested that rabbits and mice, being vegetarians, would not gnaw on boney-tasting bark. They didn’t.
Besides the above trappings, a few other measures also avert winter animal damage. Mark your calendar next year to give your lawn a through mowing at the end of the season in order to give the searching eyes of owls and hawks a better look at scurrying mice. Cats and dogs also help in keeping furry pilferers at bay.
Final decor for trees this season is lights. These are not functional, but Christmassy.
Identifying Trees in Winter
Trying to identify leafless trees this time of year is a nice game to play alone or with a companion as you walk about enjoying the brisk winter air. (I did say “leafless”—identifying evergreen trees quickly becomes too easy.) Such a game also forces a close look at the more subtle details of plants and in so doing enhances appreciation of these plants even now when they are stripped of leaves and flowers. 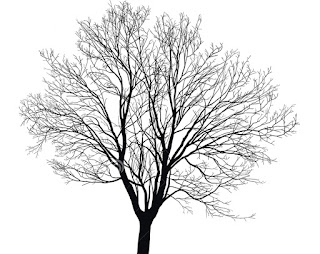 Of course, this is hardly a game with some trees. Everyone recognizes paper birch by its peeling, white bark. Watch out, though, grey birch has similar bark. Catalpa tree is quickly identified by its long, brown pods. And pin oak by its growth habit: lower branches droop downward, mid-level branches are horizontal, and upper branches turn upward.
Most deciduous trees don’t have such obvious signatures this time of year. Then, what is needed is an observant eye and a good book to describe trees in words and pictures. Particularly helpful are those books that take you through a logical sequence of steps in identification, such as Fruit Key & Twig Key to Trees and Shrubs by William Harlow and Woody Plants in Winter by E. Core and N. Ammons.
One of the first things I look for when confronted with an unknown, leafless tree is the arrangement of the buds on the young twigs. Are the buds “opposite” (in pairs, on opposite sides of each twig) or “alternate” (single and separated from each other along the length of stem)? It turns out that most deciduous trees around here have alternate buds (and most shrubs have opposite buds). So if I see opposite buds on a tree, the choice immediately is narrowed to maples, ashes, dogwoods, or horse chestnut (though this tree is not as common here)—easy to remember as “MAD Horse.” That still leaves the question of which species of dogwood, maple, or ash.
Other features further narrow the choices within opposite- or alternate-leaved trees. The shape of the buds can be telling. For example, flowering dogwoods have flower buds that look like little buttons capping short stalks. Pawpaw’s buds are rusty brown and fuzzy like velour. Also telling are twig color and nuances in bark. Purple twigs covered with a cloudy coating identify a tree as boxelder, a maple species. American hornbeam has smooth, blue-grey bark with ripples like muscle, which gives it one of its common names, musclewood.
I also look for thorns. If present, the tree is most likely black locust, honey locust (watch out again, though, because most cultivated forms of honeylocust are thornless), hawthorn, or wild plum. Black locust has short thorns, honeylocust has long thorns, often branching, and plum’s thorns are, in fact, short, sharp branches with little buds along their length.
Fruits are another guide. Prickly gumballs hang almost through winter from sweetgum trees. Magnolias still have their fruits, which look like little pineapples with red seeds popping out. And it’s within the rules of the game to look on the ground for help in naming a tree. There, you’ll still find some nuts of the shagbark hickory (identified also by its shaggy bark) and acorns (but there are many oak species, so the trick is to identify which one).
Still at a loss for a tree’s identity? Break off a twig and make a slanting cut to expose the pith. If the pith is chambered, rather than continuous, the tree is either a black walnut or a butternut. Butternut trees have chocolate-brown pith; black walnut trees have toffee-brown pith. 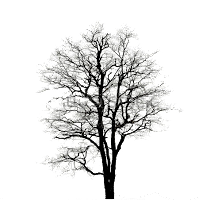 The taste of a twig sometimes is the giveaway. Black cherry tastes like bitter almond, and yellow and river birch taste like wintergreen. Paper birch twigs are tasteless. Slippery elm twigs become mucilaginous when chewed.
This should give an inkling of details that we tend to overlook in spring, summer, and fall. Some of these details are interesting; some have a subtle beauty; and some are useful only for identification.
As far as the identification game, there is one more very useful identifier. Deciduous trees are supposed to be leafless now, but often a few leaves hang on into winter. They will be dead, dry, and twisted, but often still “readable.” Not only that, but oaks and beeches are so reluctant to lose their lower leaves that you can spot these species even at some distance by their skirt of dry leaves.
Lee Reich, PhD is a garden and orchard consultant; he hosts workshops at his New Paltz farmden, which is a test site for innovative techniques in soil care, pruning, and growing fruits and vegetables. Learn more at leereich.com.