by Maria Reidelbach
I recently struck it rich—and I’ve been basking in happy endorphins ever since. Last winter I was walking with my neighbor Brit Baker and he pointed out a stream as we passed. I looked down over the bank and nearly dropped to my knees—my eyes beheld a creek chock full of fresh, beautiful watercress covering the surface of the water for at least 150 feet! I was down in a flash and munching on the crunchy, peppy greens in sheer delight. In December!
I love watercress, but the cress you see in the stores is often a sad sight—it’s so tender and crushes so easily that traveling is hard on it. The kind that grows in our local creeks is actually the very same variety as cultivated—it’s a garden escapee—but it’s much fresher and crisper, and has more flavor and  nutrients because it grows outdoors, robust from exposure to the elements. 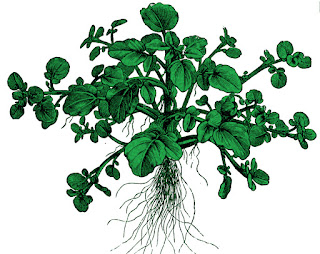 After I found my crispy cache, I got a bit obsessed with this one-of-a-kind aquatic green. I discovered that, miraculously, we found the bounty on St. Barbara’s Day—the patron saint of watercress! December 4 is the day that St. Barbara was beheaded by her own father (don’t stress, even the Catholic Church admits she probably wasn’t real). Watercress comes under Barbara’s protection because in cold climates it is one of the last tender green plants; the water protects it from freezing. Before fresh greens could be preserved or imported, watercress must have been treasured in the winter months. And lo, I was delightedly eating watercress and sharing it with friends until the temperatures dipped into the single digits and it finally froze. When the weather warmed up a little the thicket grew right back—so enthusiastic! I’ve found that watercress is lush until the dog days of summer, when it gets a bit stringy if it’s in the sun.
Watercress has been enjoyed since ancient times; its botanical name, Nasturtium officinale, means “twisted nose,” no doubt a reference to its peppery heat. It shares this lively quality with its cruciferous cousins—mustard, arugula, horseradish, and wasabi (but it’s not related to the spicy flower named nasturtium). Early written references emphasize the medicinal use of watercress: Hippocrates is said to have sited his first hospital next to a watercress creek; Romans and Anglo-Saxons ate it to avert baldness and as an aphrodisiac (a good combo!); Medieval Europeans ate it as a remedy for the “greensickness of maidens” (whatever that is); and the Irish sages, those protectors of civilization during the dark ages, enjoyed it as an especially “pure food.” In South China, where it’s always served cooked, it’s eaten as a cleansing tonic.
The old traditions were right on, watercress is brimming with phytonutrients. One serving (about 2 cups) has 53 percent of our daily vitamin C, 42 percent of vitamin A, and 8 percent of calcium. Watercress also has substantial amounts of vitamins K and E, potassium, manganese, and lots of other minerals. Recent studies are showing that it may have significant cancer-fighting qualities by reducing DNA damage, too. No wonder it’s been seen as a tonic—it’s a bonafide superfood!
Nutrition aside, watercress has always been enjoyed for its stellar culinary qualities, being one of the oldest green vegetables, and one of the favorites of Zeus himself. In Victorian England, watercress was so popular it was sold on the street in bunches that were eaten like ice cream cones. Watercress is juicy, crunchy, spicy, sweet, and green all at once—a felicitous contrast with richer foods like eggs, roasted meat, salmon, and cheese. Watercress makes a fantastic salad, its pungent flavor is scrumptious with simple oil and vinegar dressings, as well as those made with garlic, sesame oil or seeds, chives, crème fraîche, sour cream, or lemon. Additions like walnuts, cubed beets, hard boiled eggs, tofu, or cooked shrimp can create a more substantial salad; serve with fresh wholegrain bread for a great light meal.
Watercress is not uncommon in our area, but it grows only in clear, slow-moving creeks and can be hard to find. Spring-fed streams are ideal habitats. Because it grows in water that is home to other critters, you need to be especially careful about where you collect watercress. The water must be clean and not near any dirty runoff from roads or inhabited sites. Make sure that there are no sheep or cattle upland—they can spread a parasite called liver fluke. To be extra safe, unless I’m cooking it, I always rinse my cress in an antibiotic solution—I fill the salad spinner with water and add either a cup of vinegar or five drops of chlorine bleach, clean and briefly soak the cress, then refill with plain water and rinse again. You might find a cute little snail or two. Don’t get too excited while harvesting—last February I carefully donned my wellies before heading to the stream. Reaching out for an especially tasty bunch I slid right in, and was up to my hips in freezing water before I knew it! You don’t need to worry about over-harvesting a rare plant, since watercress in the wild is the same variety as cultivated, but don’t wipe out your spot, and break off a few rooty bits and let them travel downstream to begin another to begin another bed, and share the wealth.
Creamy Watercress Soup (adapted from the Stick to Local Farms Cookbook)
Yield: 6 servings
Ingredients:
• 2 quarts of water, light chicken, or vegetable broth
• 2 to 3 potatoes, peeled and sliced 1/2-inch thick
• 2 spring onions, both white bulb and green leaves, coarsely chopped (optional)
• 1 pound fresh watercress, cleaned
• 5 tablespoons unsalted butter
• 1 teaspoon salt, pepper to taste
Method:
• In a large pot, add salt to the liquid and bring to a boil. Add the potatoes and onions and cook over medium-high heat for 20 minutes or until tender.
• Add the watercress; stir and cook five more minutes. Do not overcook or the watercress will turn dull.
• Dip a cup or so of broth and set aside. To puree, if using a blender, transfer the solids to a food processor or blender with a slotted spoon, saving the broth. If you’ve got a stick blender, just blend what’s in the pot.
• Blend until very smooth, then add the butter 1 tablespoon at a time. Put the purée back in the pot, if needed, and add the reserved broth a bit at a time until you reach a consistency you like. Reheat gently, salt and pepper to taste. Serve hot. Croutons are nice.
Variation: keep a large handful of the watercress out of the cookpot and blend it in raw.
Maria Reidelbach is an author, artist and local food activist, living, working and eating in Accord, NY. maria@stick2local.com.