Connecting the Rail Trails Throughout Region

There was a time when the abandoned rail beds of the mid-Hudson region were merely a silent testament to how business used to be done in this area.  Stripped of valuable steel and mostly existing only as easements in a county clerk’s office, they were little more than an obstacle to development. The picture in 2014 is quite different, with many of those old rail beds now serving as cornerstones to a burgeoning trail system, one that could someday take users from close to New York City up to nearly Albany. 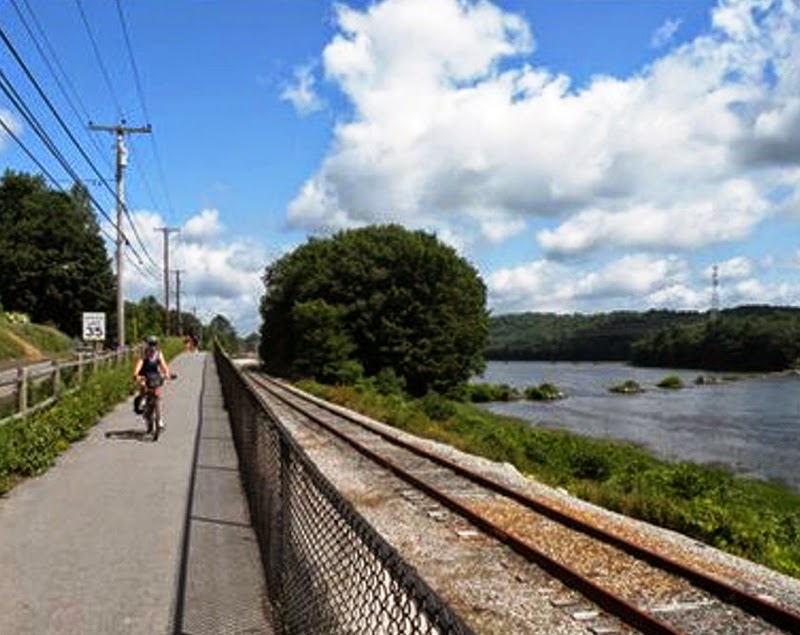 While rail trails are nothing new – the first one in the United States was completed in 1965, and locally some have been in place since the 1990s – it was the Walkway Over the Hudson which brought them into the public consciousness. The opening of the old Poughkeepsie Rail Bridge as a linear park in 2009 brought so many more tourists than projected – 750,000 in some years – that public officials sat up and took notice.
Fred Schaeffer was instrumental in that process, but it wasn’t his first rail-related project.  In 1993, he convinced the Dutchess County Legislature that rather than converting an old rail bed into a road, they should instead make it into a rail trail. The Dutchess Rail Trail was the first in the county, and together with the Harlem Valley Rail Trail it anchors a system of trails east of the Hudson.
Not all of the Dutchess trails were once railroads.  In the more rural northern part of the county, trails that connect to rail trails, or aspire to, include those under the stewardship of the Winnakee Land Trust, one of many local non-profits across the nation that safeguard development rights to preserve open space. Walking trails are not the only types of easements that Winnakee and other land trusts monitor, but these groups are an important part of the trail system in the region.
The Wallkill Valley Land Trust, in New Paltz, is another group that holds trail easements, these for the Wallkill Valley Rail Trail which extends through Gardiner and New Paltz. In an unusual case, the WVLT owns another portion of that trail outright, extending north through Rosendale into Kingston, and including the visually stunning trestle sometimes dubbed the “walkway over the Rondout.” Eager walkers, bikers, and hikers have increasingly used the trail since the trestle opened and the owners of the as-yet-unbuilt Williams Lake Project restored access to the trail on that property. Traffic is significant enough that Rosendale has seen applications for businesses that wish to cater specifically to trail users.
Trail ownership adds extra maintenance responsibilities for the land trust, which must address issues like a drainage problem just north of the trestle, which led to a closure of the span for about a week. A more common practice for land trusts is to hold the easement only, ensuring that the trail is not turned into a strip mall, while the local municipality has title to the land and thus the responsibility to do the work. Local highway departments have all the necessary equipment and manpower to keep trails clear and safe, and land trusts are adept at developing the relationships with local government to support that vision.
The quality of rail trails varies widely, from the paved and kiosk-dotted trail through the town of Lloyd to the grassy strip which slips behind horse farms in Rochester. Some of those less-developed portions are adjacent to gaps in the nascent system, which arise for a variety of reasons. Rail beds run through correctional facility land in southern Ulster County, requiring delicate negotiation for access. Some of the rail easements were sold back to landowners when the railroads pulled out, which is why the town of Rochester is trying to find ways to close a gap of a couple of miles.  New York City’s Department of Environmental Protection is working with Ulster County to develop an 11.5-mile stretch of the Ulster & Delaware Railroad along the shore of the Ashokan Reservoir into a trail, but the DEP’s security concerns must also be addressed.
Rail trails are starting to attract big money too. Senator Charles Schumer announced that he is seeking a $950,000 grant to complete a gap between the trails in New Paltz and neighboring Lloyd, which would connect much of Ulster’s trails to the Walkway Over the Hudson. The Wallkill Valley Rail Trail is one of several which reaches into Kingston, so theoretically a person who brought a bicycle onto Metro North in Manhattan could ride all the way there from the Poughkeepsie train station.
That kind of funding from the Feds is typically dependent upon accessibility, among other things.  Segments of rail trail which are gravel or grass can’t be used by someone with mobility issues, and may not be eligible for big grants such as this. Paving the trails carries with it ongoing maintenance costs, so a balance must be struck by the community.
Not everyone is convinced that rail trails are a terribly good idea. With a trail backing onto one’s property, questions arise about liability and nuisance. Some landowners have found their driveways blocked by the parked cars of trail users, since parking is not provided at every access point. Portions of some trails are clearly posted so that walkers understand that they are adjacent to private property, but in fact some property rights have been taken away.
Others wonder if the emphasis on tourism as the sole economic driver in the region is a sound one. Jobs in hospitality do not pay nearly as much as manufacturing positions, and while hotels pay a handsome occupancy tax to the counties, it doesn’t bring local property taxes down one whit. A nagging fear exists that the focus on relatively low-paying tourism jobs in a relatively high-tax state could be setting the stage for a fiscal disaster sometime in the future.
No matter your perspective, these trails are here, and taking a walk on one might leave you surprised and delighted.