Call for Coopers: Barrels back the craft distillery industry

by Terence P Ward
Barrels are an important part of the American landscape. Once the mind is attuned to them, they’ll pop up just about every day—as decorations in yards and rustic inns, backdrops in movies, and props in video games. And when you consider that “Cooper Street” indicates the place where barrels were once made, these round storage vessels will seem to have permeated life in almost every Hudson Valley town. Coopers plied their trade in Ulster County at least as far back as the D&H Canal was open for business in 1828, and while the purpose of barrels is now different, there’s still a need for them. In fact, the demand for local barrels may now be more than ever before.
What makes a barrel special is its shape, which allows for it to be rolled and also stacked for storage. A healthy worker can move 1,200 pounds of goods when it’s stored in a barrel, because the shape makes it possible to tip or roll it from place to place. That made it ideal for transporting food and other products by boat, such as along the D&H, where barrels of Rosendale cement were shipped out on barges. Before the advent of shipping containers, barrels were the best way to ship many different types of goods. Before the invention of individualized containers like glass bottles, barrels were also the best way to tap liquid refreshment. 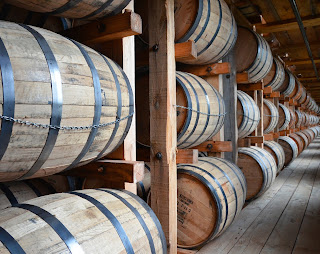 Local woodworker John Cox is in the process of opening Quercus: A Hudson Valley Cooperage to meet the modern demand for barrels. According to him, it’s possible to make barrels for either wet or dry storage. Dry barrels can carry anything from flour to cement to gunpowder and were historically lined with paper to keep out dirt and moisture. Wet storage barrels have the metal bands around the middle, which hold the wooden staves, from which the barrel is comprised, together so tightly that liquid can’t seep out. Simply put, those bands are what make a wooden vessel watertight—or better yet, whiskey-tight. That’s not to say that other alcohols can’t be stored in them, however: the Vassar family built its Dutchess County fortune on cooperages and beer production.
American whiskey is aged in white oak barrels for anywhere from a couple months to several years. The inside of the barrels must be charred; it is this mixture of wood and charring that gives whiskeys their subtle flavor variations. After one batch, whiskey barrels legally can’t be used for that purpose again (which has its upsides­—bourbon barrel-aged maple syrup?). Federal rules guarantee that there will be a demand for oak barrels as long as there is a demand for whiskey in this country. There are enough large cooperages to keep the biggest distillers in the barrels that they need, but here in New York there’s been a boom in craft distillers. Cox calls Ulster County “ground zero” of that movement, and credits Tuthilltown Spirits in Gardiner for catalyzing this young industry.
New craft distillers are finding that it’s a lot more difficult to obtain the barrels they need. Large cooperages are likely to serve corporate clients like Jim Beam first, and the specialized stave mills can sometimes face a lack of white oak to use. That spells a barrel shortage for the state’s burgeoning craft distillery industry, and a ripe opportunity for an experienced woodworker like Cox. In the last year alone, the number of farm distilleries in the state has increased by more than 25 percent, from 62 to 78. Governor Cuomo is heartily promoting the craft distillery industry for increasing “tax revenue, job opportunities, demand for farm products, and a bolstered tourism impact for the state.” But these benefits are delivered inside oak barrels, which means a complementary cooperage industry must also grow.
After studying barrels old and new and consulting with local distillers to understand how his work impacts the final product, Cox has settled upon harvesting white oak from New York sources only, and curing it himself to cut into staves rather than rely upon a specialty mill. While the necessary air-drying takes a full 18 months to produce usable wood (kiln-dried wood won’t bend, making it untenable for coopering), Cox believes that Quercus can supply barrels that will be sought after by local craft distillers. Although the cooperage in High Falls is not yet officially open for business, they’ve already accepted their first hundred-barrel order. He hopes that many more Quercus barrels will be carrying local craft whiskeys, ciders, beers, and wines in the coming years.