by Maria Reidelbach
Most people don’t even know what a real currant is, a berry that is both misunderstood and under-appreciated. If the world was a fair place, they’d be as popular as blueberries; instead, currants are the victims of some bad breaks.
The first of these is their name. I find the etymology of our food names a fascinating type of anthropology. The twisted history of “currant” is a good example. The Oxford English Dictionary explains that back in the day—the day of Pliny the Elder, that is (c. 750BCE)—folks enjoyed small, thick-skinned grapes that dried beautifully. They were called raisins of Corinth, or Reysyns de Corauntz. By the 17th century, that name had settled into simply “currants.”
Meanwhile, in the 16th century, people in England began using the term “bastard Corinthes” for black and red berries from bushes of the genus Ribes. Some of the era’s word geeks complained about the transfer, but the misnomer stuck. These plump, glistening, fresh currants are very different from the dried grapes—and these days they are rather rare. I had never encountered them until a friend shared some that were growing in her Sullivan County backyard. There are three main colors, each with distinct characteristics.
Red currants are stupefyingly beautiful, growing in graceful bunches on slender stems, a bright, clear ruby, translucent and glowing. They are tart—very tart—but their flavor is absolutely tropical. Remember the Jello-like dessert mix called Danish Delight? That’s red currant flavor. White currants are an offshoot, or “sport” of red currants. They are usually pinkish, smaller and sweeter than red currants. In Bar-le-duc, France, a special jelly made from white or red currants is considered to be one of the world’s finest. Since 1344, the jelly has been made by using a sharpened goose quill to individually seed each currant. The jelly is truly jewel-like with whole currents floating in pink or red transparent juice. It sells for about $40 for 3 ounces, if you can find it.
The black currant has an even bigger personality. The berry has smooth, true-black skin that bleeds deep violet-red. Fragrance is the distinguishing characteristic of the species—the berries, leaves, and bark all have a complex, deep resiny-winey aroma that I think of as “essence of berry.” Black currants are almost sweet. If you’ve tasted kir, made with crème de cassis, you’ve enjoyed black currant. The leaves and bark are used to make delicious black currant tea.
All the currants appear to have huge amounts of phytonutrients, particularly antioxidants and particularly black currants. One major type of antioxidant is anthocyanin; its deep purple color signals its presence in berries, lettuce, purple cabbage, and other produce. Because of the obscurity of currants, I couldn’t find reliable detailed nutritional charts (even at the USDA), but in general, berries have four times the antioxidant activity of other fruit and ten times that of vegetables. Black currants have twice the vitamin C of oranges! Powerhouses!
Currants are easy to grow—and they’re one of the few food plants to tolerate partial shade. Locally, there are few diseases that they’re vulnerable to, so they don’t need to be treated with pesticides. Black currant is even deer resistant. The berries grow on an attractive bush (there are ornamental varieties), and pruning them is a snap. They love the local climate. I got almost a gallon of black currants from my four-year-old bush. So why aren’t currants more popular?
At the beginning of the 20th century, there were plenty of currant bushes in American yards and gardens, along with their close cousins, the gooseberries (also Ribes), and the first cultivated blueberry bushes. However, the timber industry discovered a disease called white pine blister rust that was wiping out trees. Looking for the cause, they fingered currants and gooseberries as alternate hosts, and the bushes were made illegal by federal law and state laws. In the 1930s, the Civilian Conservation Corps crews destroyed every currant bush they found, leaving the blueberries to thrive. Decades later, it was proven that most currants are naturally resistant to the blister rust and are not carriers. The federal ban was lifted in 1966, but by then folks had forgotten about currants and were happy with their blueberry bushes. State laws lingered on the books for decades, inhibiting any non-conformist who wanted to grow the berries. But now in the 21st century, currants are coming back, and the epicenter is right here in the Hudson Valley. 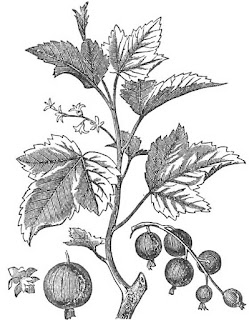 Our area is home to at least three experts on the subject. At the Kingston and Rhinebeck Farmers Markets, Ray Tousey of Germantown sells currants, currant juice, currant bushes, and cassis. He extols the “pink champagne” currant for its beauty and great flavor, and he’s a great source of currant information and wisdom. Lee Reich grows many varieties of currants and gooseberries too, on his “farmden” in New Paltz. He loves the “clove” currant; it’s got beautiful, aromatic flowers, and it’s native to our area. Lee’s Pruning Book explains how to prune currants for large and plentiful berries—and it’s quite easy.
Greg Quinn and his partner Carolyn Blackwood got a farm in Staatsburg in 1999. Greg homed in on currants as a new, niche cash crop, but ran into problems because there were still New York State laws on the books forbidding growing them. Greg, a man of many talents, and no small marketing expertise, took the challenge as a battle cry. He managed to overturn the remaining NYS laws within a year, plowing the way for currants to return to our farms and gardens today. (Greg also believes that the accepted etymology described above is the result of Greek disinformation.) He’s got an interesting TEDx Hudson talk on YouTube, and an enterprise called CurrantC, devoted to all things au currant.
Many thanks to the experts cited above—Lee, Ray and Greg are most generous with their experience and wisdom and we’re lucky to have them in our community.
Maria Reidelbach is a local food activist, artist and author; her most recent book is the Stick to Local Farms Cookbook, available at farmstands, local shops and stick2local.com.