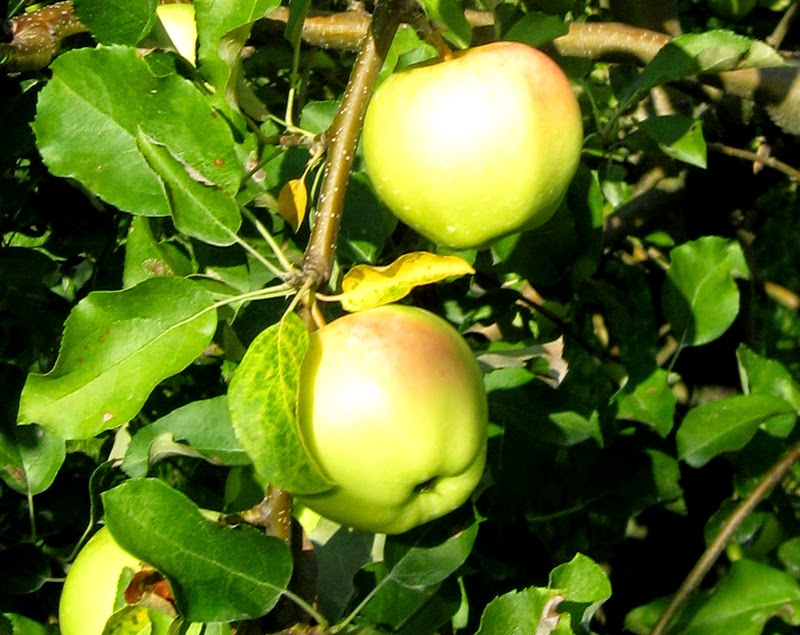 One of the glories of summer is the abundance and variety of locally grown produce. Apples, however, are not usually thought of as a summer crop; they represent the cooler days of autumn harvest-time. So it might surprise you to know that there are, in fact, apples that are ready for eating in late August. The best of these, many would argue, is the Ginger Gold apple.
Elizabeth Ryan, owner of both the Stone Ridge Orchard in Ulster County and the Breezy Hill Orchard in Dutchess, explained that in general, “summer apples aren’t that great. They tend to be lighter in flavor and soak up more water. They don’t keep well. Late season apples are denser, more flavorful, and keep well.”
The beautiful yellow Ginger Gold is different from other summer apples. With a juicy, crisp, mildly tart flavor, cream-colored flesh, and a fine texture, they keep well for several weeks on the counter, or a few months in the fridge. This fruit is ideal when eaten raw or in a salad. Ryan doesn’t recommend it as a cooking apple, as it doesn’t hold up as well as other varieties in the oven. She suggests mixing sliced Ginger Gold with stone fruits such as peaches and plums in a salad, adding mint, basil and roasted walnuts with an optional light vinaigrette. Because the apple doesn’t oxidize right away when you cut it, it makes for a nice appearance in a salad.
Elizabeth Ryan is a self-described apple historian and has a wealth of information about the backgrounds of many local varieties of the fruit. Ginger Golds have an interesting history. They are a fairly new variety, originating in the 1960s as a cross between Golden Delicious and the Albemarle/Newtown Pippin in Virginia. According to Wikipedia, the Virginia Extension Service said, “This is the best apple that we have evaluated that ripens before Gala.”
Yet they have a strong New York connection, because the Newtown Pippin originated in Newtown, Long Island—now Flushing, Queens. Benjamin Franklin took a number of these  Pippins with him to England in the 1700s, after England had lost its entire apple crop one year. At that time they were grown at Pelle Farm in Esopus, Ulster County.
Today there are many more orchards in the mid Hudson Valley where you can find a large variety of apples and other fruits. Due to the harsh winter last year, some fruit has been lost this season. For example, Elizabeth Ryan lost her cherry crop and much of her peaches. There are, however, nectarines and soon, for a couple of weeks, Ginger Golds, followed by the later season apples.  Ginger Golds are also grown at Kelder’s Farm in Accord.
Following is a list of pick-your-own orchards in Dutchess and Ulster counties. Be sure and call ahead to find out which varieties of apples are grown.
Dutchess County
• Barton Orchards, Poughquag
• Breezy Hill Orchards, Staatsburg
• Cedar Heights Orchards, Rhinebeck
• Mead Orchards, Tivoli
• Meadowbrook Farm, Wappingers
• Montgomery Place Orchards, Red Hook
• Oriole Orchards, Red Hook

Ulster County
• Jenkins and Luekens Orchard, New Paltz
• Kelders Farm, Accord
• Minard Farms, Clintondale
• Stone Ridge Orchards, Stone Ridge
• Westwind Orchard, Accord
• Wilklow Orchards, Highland
• Wrights Farm, Gardiner
• Hurds Family Farm, Modena
With all these apples, you’ll need a good applesauce recipe to make use of them. Ginger Golds make a nice applesauce. I adapted the following recipe from the blog “(never)homemaker.”
Ginger Gold Applesauce
Ingredients
• 10 large Ginger Gold apples
• 2 tablespoons maple syrup, honey, or agave
• 2 teaspoons lemon juice
• 1 teaspoon ground cinnamon
• 1/2 teaspoon ground cloves
• 1/2 teaspoon ground cardamom
Procedure
1. Peel all your apples. Then remove the cores and slice them into chunks. Place them into the pot of a slow cooker.
2. Add the maple syrup, lemon juice, and spices. Mix with a spatula to get everything coated.
3. Turn slow cooker onto high and cook for three hours.
4. Mash with a potato masher or process in a blender to make it nice and smooth.
The next recipe is an uncooked apple crisp and works well with Ginger Golds. I found it on the Whole Foods website.
• 4 apples, cored and chopped
• 1/4 cup orange juice
• 3/4 cup pecan halves
• 3/4 cup hazelnuts
• 3/4 cup raisins
• 3/4 teaspoon ground ginger
• 3/4 teaspoon ground cinnamon
Put apples in a dish. Drizzle with orange juice, toss until the fruit is coated and smooth the top. In a food processor, combine pecans, hazelnuts, raisins, ginger and cinnamon and pulse just until chopped. Spoon the nut mixture over the apple mixture.