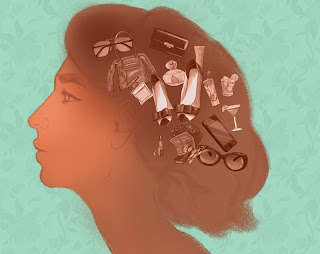 When I was a kid I spent many of my summers at my grandparents’ farm in Westfield, New York. We had a lot of wonderful homegrown food: fresh vegetables, berries, and all the great meals my Grandma made. When we would take too much food on our plates, my Grandpa would say, “Your eyes were bigger than your stomach.” The wisdom he was expressing, in a way that even kids could understand, is something that often eludes us.
To put it simply, we ordinarily don’t pay attention to how the mind creates a limitless stream of wants and supposed needs. Of course, as human beings, we do have very real needs for basics like food, water, shelter and clothing. The only problem is that the habitual patterns associated with getting these things don’t seem to have “off” buttons.
What we’re talking about here is the psychological nature of materialism. At a superficial level, we all reject materialism with phrases like, “money isn’t everything,” or “the best things in life are free.” Then we go back to whatever habitual patterns of behavior, expectations and attachments that we’ve internalized. As Americans, we have lived in an extraordinary era of abundance materially, yet our national psyche (even for rich people) is streaked through and through with poverty mentality. Rich or poor, we’ve bought into the mythology of materialism, which makes it extraordinarily difficult to navigate the treacherous waters of the present, when the consequences of our prodigious era of abundance are coming back at us with a vengeance.
The real problem with materialism is not material things, it’s the “–ism”. It is a matter of obsession and of letting the priorities we put on wealth or possessions override our human values. We see the bad outcomes of this pattern all the time, but to get to the bottom of it, we need to see how, at the most fundamental level, it is the mind that creates the solidity and along with it, the attachment, that coalesces into materialism. At a most basic level, the mind solidifies—literally objectifies—the things that we perceive and conceptualize. The duality of the perceiving subject—the sense of self or ego—and its objects is the basic level of psychological materialism. In other words, what is immediate and momentary becomes entrenched in patterns, habits, and rationalizations. Then it’s off to the races with the things we like (attachment), the things we don’t like (aversion and aggression), and the things we don’t pay attention to (ignorance).
Because this is all so personal and immediate, it is quite difficult to disentangle economics from materialism. After all, economics deals with “the material world.” But this is actually why it is so critically important that we do resolve issues related to materialism if we are to create a healthy society for humanity going forward. One interesting point, which highlights the psychological nature of our materialism, is that in our culture of waste and destructiveness, we really don’t respect the material world. Quite the reverse. Ironically perhaps, one route away from materialism is to cultivate greater respect for “stuff” at a basic level.
Whatever pattern our individual values and actions may take (and I personally think we’re all either materialists or recovering materialists), it is important to see how materialist assumptions pervade our thinking, and more broadly, that of society.
As long as I’ve been fascinated by the study of economic ideas, I’ve been both haunted and inspired by this subject. I say haunted because we most certainly live in an era of materialism, and because it is such a fundamental threat to the future of humanity. But I am inspired because there is widespread recognition of the problem, and a lot of work being done to create alternatives. In fact, we could say that the whole flavor of “the new economics,” with its emphasis on human values, economic justice, and environmental sanity is post-materialist in nature. Still, and despite the good intentions of a lot of smart people, it’s a real challenge to develop a coherent body of thought in this vein, let alone inspire the general public to jump on the bandwagon.
What enables us to transcend materialism? In a word: wisdom—the wisdom that enables us to see that there is such a thing as “enough”; the wisdom that lets us see what really makes people happy. As well, there is the wisdom that cares about others, including future generations.
People may think that a post-materialist economy would be some sort of poverty-stricken situation. Actually, the reverse is true. Materialism itself is a poverty mentality. What comes after materialism is sanity, sufficiency, and yes, prosperity.