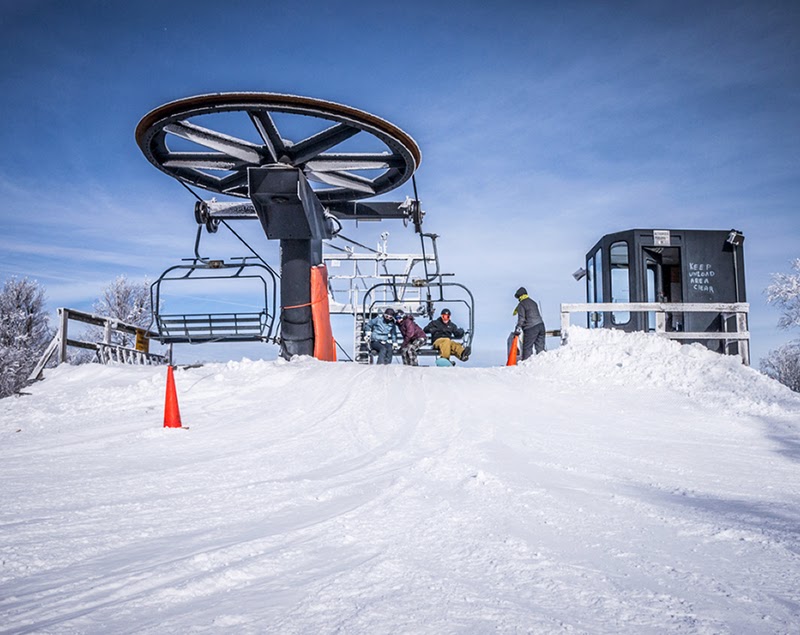 Skiing on New York’s slopes is an activity that dates back a hundred years or more. At Belleayre

Mountain, legend has it that Maltby Shipp pioneered the slopes with his son in 1929. Surely the rush Shipp experienced is the same one that lures skiers to the peaks today.

Belleayre Mountain’s slopes had a good combination of snowfall and incline to make the climb up worthwhile, at least for the few rugged souls who attempted such an adventure. The peak was protected from logging by virtue of being part of the forest preserve ratified by a constitutional amendment that passed in 1895. These “forever wild” lands were designated in response to the Hudson River clogging with silt that washed down slopes denuded of trees; the move was motivated by commerce, not environmentalism, and the Conservation Department was created to oversee the areas.
The excitement of the Winter Olympics at Lake Placid, in 1932, led the Conservation Department to consider ski slopes, and the New Deal provided some early funding. But interest in the sport didn’t really start climbing until after World War II. Veterans of the Tenth Mountain Division shared their enthusiasm for the sport, and the public started clamoring for a better way to ski Belleayre. The constitutional amendment that modified the meaning of “forever wild” was approved by a sizable majority in 1947, and the new ski center opened with great fanfare—albeit little snow—in 1950. Arthur Draper, the man who designed the early slopes there and at Whiteface and Gore, became the facility’s first superintendent. He wrote about the frequent wildlife sightings on the slopes, likening the groomed trails to a “supermarket” for the animals, and generally downplayed what little opposition there had been to the ski center.
By the 1980s, Belleayre should have been sitting pretty. New York had just hosted another Olympics at Lake Placid, and the enthusiasm that helped spur skiing on in the 1930s should have given another boost to the state’s oldest facility. But Mario Cuomo, perhaps looking at the amount the state had spent expanding skiing in the ’60s and ’70s, proposed privatizing the facility. To this idea, opposition was fierce, and came from all parts of the state. When the dust settled, New York had invested another $6 million in Belleayre’s trails, lodges, and snowmaking capabilities, and again amended the constitution to allow for another five miles of ski trails.
During that time, the state created the Olympic Regional Development Authority, or ORDA, to manage the Lake Placid facility. Whiteface and Gore, the other state-owned skiing facilities, eventually had their day-to-day operations placed under ORDA, although the DEC, the successor of the old Conservation Department, still has jurisdiction over the lands. Belleayre remained directly managed by the DEC after its sister sites were given over to ORDA in the late 1980s.
After the turn of the century, Crossroads Ventures proposed the massive Belleayre Resort project, which would create two hotels, nearly 250 time-shares, and a world-class golf course on 1,200 acres of land adjacent to the ski resort. The Highmount Ski Center would be sold by the developers to the state to support another expansion of the ski center, and additional acres of the Catskills would become “forever wild.” That project has not yet seen a single shovelful of dirt moved, but has finally reached the point where the two local planning boards will begin the approval process.
In the intervening years, the resort proposal has been cut in half, and much of the land it is planned for was sold to the state.
A turning point for the Belleayre Ski Center—and the Belleayre Resort, as well—was the transfer of operational management from the DEC to ORDA, which took place in 2012. According to DEC Regional Citizen Participation Specialist Wendy Rosenbach, “The overall rationale to transfer management of Belleayre to ORDA was based on the fact that ORDA is the state entity that specializes in running ski areas.” Rosenbach declined the request to make someone available for an interview about Belleayre, and instead responded to questions submitted in writing.
Rosenbach inferred that the future of Belleayre will still be governed by the “forever wild” lands on which it is located. “The over-riding ‘charge’ that DEC used in managing ski centers is to offer an enjoyable skiing experience, while protecting natural resources on the site and adhering to constitutional restrictions. The consistent charge has always been, and continues to be, safeguarding the environment and providing recreation consistent with DEC’s authority. DEC still has jurisdiction over these lands, and DEC’s ‘charge’ remains the same, even though ORDA now has day-to-day management over these facilities.”

That management has become decidedly more complex. What was once simply “forever wild” land now has a number of distinct designations, depending upon whether the DEC is trying to preserve the environment, encourage recreation, or somehow do both. They range from the extremely restrictive “wilderness” designation to the “intensive use” label, which is applied to the slopes. Various interest groups continually lobby the department to move specific parcels to designations that are more—or less—restrictive.
Even as it transferred management to ORDA, the DEC was preparing plans for another expansion, one that will cost $74 million over five years and promises 280 jobs and twice the skiing. Central to that is the Highmount Ski Center, where much of the construction will take place. The plans call for 16 new trails, three additional parking areas, three new ski lifts, and a ski lodge. Most of the work will take place in already-disturbed areas, with about 100 more acres of formerly “forever wild” forest being flattened to complete the work. Once completed, the revitalized Belleayre is projected to bring an additional $5.2 million in ski revenue to the area, and another $220,000 in local and state taxes.