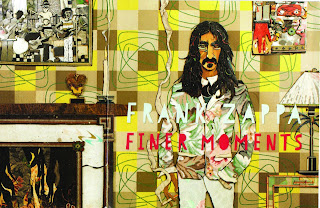 To look at art and be stirred from my feet up is exciting. Bill Miller’s collage pictures—some made from vintage linoleum—may do this for you too. Certainly, Miller’s pictures quickly engage you with recognizable imagery, dynamic colors, and an innovative process, but it is that warm feeling of nostalgia that creeps up from my feet that is the exciting new art surprise for me.
It is the linoleum and Miller’s portraits with landscapes that stir my memories of the garish kitchen floor of my early days when dinner was not my responsibility. To daydream while rolling around on the linoleum kitchen floor apparently was my job. As I lay on that cushiony warm linoleum, I was safe and happy to daydream looking out the window.
The daydreams I had were part truthful images of people, places and things, part fantasy, expressive images, part glimpses of landscapes that slipped between remembered and imagined; quick and sketchy, shimmering and alive and then they were gone and another scene would unfold in my mind’s eye—sort-of like moving through a gallery of Bill Miller’s pictorial collage work. I know that scene. I remember that moment. Was that my memory or Bill Miller’s?
Miller’s innovative and evocative work, using found and repurposed materials like linoleum, have earned him national acclaim. He has been widely exhibited, including solo shows in NYC, LA, Philadelphia, Seattle, Austin, San Diego, Pittsburgh, Columbus, Baltimore and Woodstock, NY. He has been profiled by the National Geographic Channel andWQED TV (public television), and featured in prominent publications including New York Times, HOME Magazine, and the coffee table book Found Object Art. 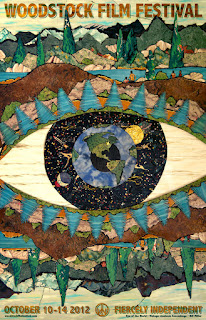 Miller was chosen this year to create the artwork for the 13th annual Woodstock Film Festival, joining notable artists Peter Max, Milton Glaser and Bill Plimpton, who were previously selected for this honor.
Born 1962 in Cleveland, OH, now a Woodstock, NY resident, Miller originally concentrated on painting and printmaking. He relocated to Pittsburgh where he was a founding member of the Industrial Arts Co-op, which called for a collective artistic response to the devastating impact of decaying industrial infrastructure on surrounding communities. The group constructed immense sculptures inside abandoned industrial buildings from materials found on-site. While scavenging for materials, Miller was drawn to scraps of linoleum, and compulsively began collecting what was to become his new pallet and principle medium for almost 20 years.
Linoleum had been present in all aspects of 20th-century life, from our homes to the workplace and throughout school buildings. It was durable and looked great especially after waxing. Then vinyl or resilient flooring arrived on the market and became the go-to floor covering for quick, easy, affordable floor covering that didn’t require waxing and sealing to keep it looking good. But linoleum is making a return due in large part to the earth-friendlier, sometimes renewable materials used to make it up—and because of the urge of many home renovators to accurately copy original flooring to their home.
Linoleum is primarily a combination of linseed oil, wood flour, cork powder, resins and ground limestone mixed with mineral pigments to provide color and pressed onto a jute base. The name comes from the Latin words “linum” (linseed) and “oleum” (oil).
Bill Miller doesn’t have to scavenge for his linoleum anymore as he says his dumpster diving days are mostly over. He acquires a lot from donation and only has to rummage through his own scrap bins of linoleum for his materials.
Miller cuts up the linoleum remnants and then fits the pieces together, adhering them on wooden boards with construction glue and adding layers and layers of non-yellowing varnish. The varnish layering adds a mosaic quality that imparts a stained glass look to the work. 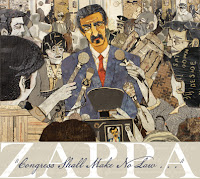 Using only the flooring’s found surface, with no added paint, to render his subjects, Miller’s work ranges from landscapes to political that draw on iconic news and pop culture. Miller’s work has also been linked to flat patterning applications used in quilting traditions, which happens to be a long-time avocation of his sister.
In 2007, Miller was honored with a retrospective exhibit at the Pittsburgh Center for the Arts. In 2010, he was chosen to create the cover image for the Frank Zappa CD Congress Shall Make No Law, issued to mark the 25th anniversary of Zappa’s anti-censorship testimony on Capitol Hill to support artistic freedom of expression. Yah!